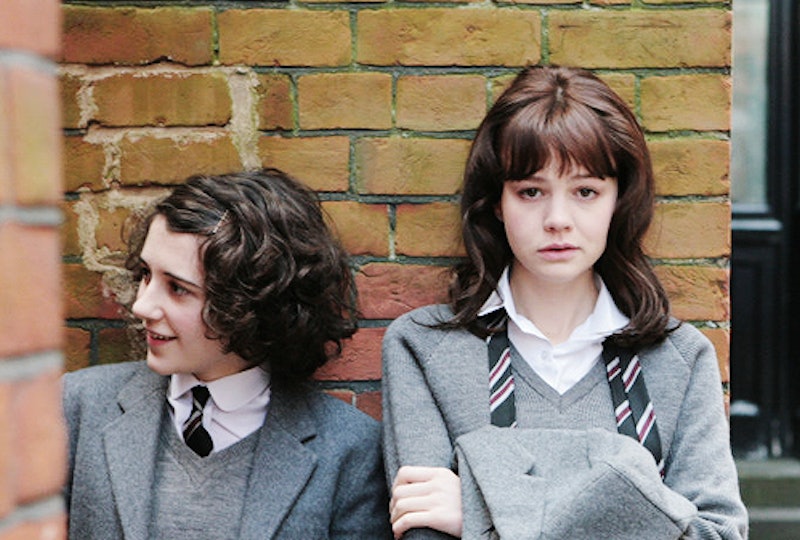 Given all the recent news surrounding high school girls taking a stand against sexist dress code rules, feminism appears to be taking a big step forward. However, thanks to a high school principal in Michigan, we're being forced to rethink just how much progress has been made in educating the public about how the female form doesn't exist to be freely sexualized.

When Jim Bazen, principal of Plymouth Christian High School in Grand Rapids, read an editorial piece in the Grand Rapids Press entitled "School Dress Codes Have a Serious Sexism Problem," he decided to write a response to set the record straight. Dress codes aren't there to oppress girls, he argued. They're there to protect them from becoming sex objects. In his response to the article, he began the discussion by stating, "You admit [in the article] that dress codes exist to limit distraction. I believe you agree that if young ladies are scantily clad, the young men will look at them not as persons, but as sex objects."

A statement like that unfortunately implies that instead of teaching the boys of the school that not every sexual urge needs to be acted upon, the responsibility is instead on the girls to minimize these distractions. He went on to write, "As a female, you will never completely understand the male mind: Being wired more visual, males are attracted to shape and skin. Yes, a lot of bare skin or tightly covered (Spandex!) skin is a sexual distraction to a male. He will say, the more skin the better...but this leads him to treat women as 'sex objects' rather than respect her for who she is. So, it would seem to me, that if you do not want women treated as 'sex objects,' you should tell them to cover more skin."

We've all likely heard this trope before: If you want to be seen as a human being, you have to leave the shorty shorts at home. By saying all this, Bazen is unfortunately suggesting that the body of a woman is made for the pleasure of a man. If she dares to be bold by wearing body-hugging leggings, then she shouldn't be surprised that a guy would ogle and act upon the dirty thoughts that the outline of a butt will inspire.

When Bustle reached out to Bazen for comment, he expressed concerns over media misrepresentation of his initial article, adding, "I do believe men are part of the equation and do not hold women responsible for the actions of men… However, you could see it in the same way as the warning you sometimes see posted in a public place: 'Not responsible for stolen articles, keep your valuables locked up.' If you don’t want your wallet stolen, you don’t leave your purse wide open on the counter and walk away. If something of value gets stolen, the thief of course is 100 percent guilty, but do you think you could have avoided the incident by not leaving your valuables out in full view?"

Unfortunately, the issue of victim blaming still remains: With such reasoning, we are still teaching young men that ogling women is just part of their nature.

In his initial article, Bazen also noted, "A dress-code policy stating 'women, dress how you wish' and at the same time expecting the guys to keep their eyes off young ladies with shirts revealing their cleavage, short skirt, tight pants/leggings, shorty shorts, or tight shirt, is like walking out into the rain and expecting not to get wet."

News writer Kristina Marusic at MTV pointed out, "It’s exactly this kind of thinking that actually leads to the objectification of women (Bazen does it quite literally, by referring to a woman’s virginity as a 'gift' for a man), victim-blaming, and the perpetuation of rape culture."

By not teaching males that objectifying is wrong and not simply a "natural reaction" to the curve of a female body, we're shifting the blame to the victims: The girls. We are taught to be ashamed of our natural bodies and to be scared of the unwanted responses they might inspire just by existing. That's how questions like "what was she wearing?" and "was she asking for it?" become the norm.

The good news is that even though there are school administrators out there failing to acknowledge the double standard, many students are refusing to blindly accept the dress codes. Here are three times they stood up against them.

When sophomore Hailey Everhart realized the sexist nature of her Illinois school's dress code (not being able to bare their shoulders), she and her friends began creating a Facebook page and an Instagram account. They fought to change the sexist dress code, create a space where females support each other and instill body positivity, and make a call to not put the responsibility on females to hide, but rather teach males not to treat women as sexual objects.

2. When The #StandWithMireya Campaign Went Viral

When senior Mireya Briceno got kicked out of prom at her Michigan school for wearing a "too revealing" dress, everyone was confused. She has worn a cap sleeved, to-the-ground mermaid dress with retro-inspired blue and white polka dots. What could be deemed inappropriate there? Well, it was the small cut-out on her upper back that had her principal shuffling her out of the dance.

She went quietly, not wanting to make a scene, but social media took notice and supporters created the hashtag #StandWithMireya to bring attention to sexist school policies.

3. When Biglerville Seniors Fought Against A Sexist Memo

When Biglerville seniors in Pennsylvania received a memo regarding how to dress for graduation, there was a giant discrepancy surrounding tips for the males and tips for the females. Where the guys got four bullet points reminding them to pick out nice collared shirts and not let their pants sag, the girls got two long paragraphs peppered with fat-shaming language and sexist attitudes.

Examples of such language were "Please remember as you select an outfit... that we don't want to be looking at 'sausage rolls,'" and "Remember that you can't put 10 pounds of mud in a 5-pound sack." The students took to social media to express their disgust and to demand an apology, which they quickly received. Sort of. After much public attention (local news outlet WHTM picked up the story), the school issued a statement that stated that they "regret that the document contained some unfortunate word choices," but that they also "hope this does not distract from the dignity of the graduation ceremony and the accomplishments of our graduating class."

When it comes to tackling the inherent sexism that exists in dress codes, it's likely going to take a long, long time to observe marked change. However, people are noticing and fighting — and that's a pretty great place to start.