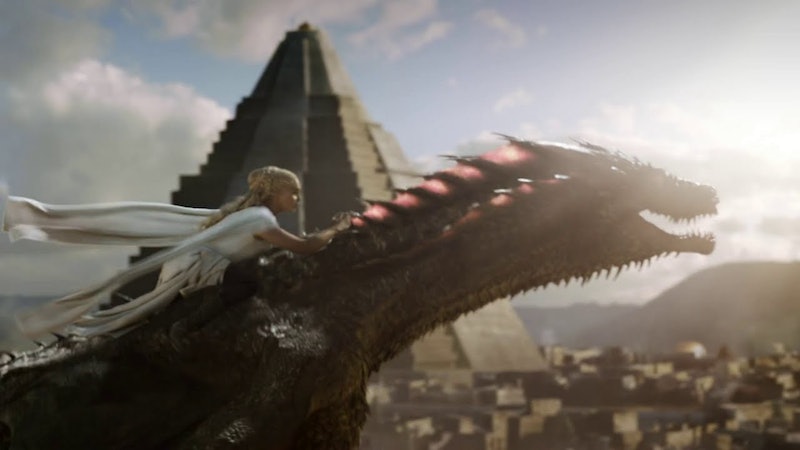 Ahem, *taps mic* if you didn't realize, Thanksgiving, and thus the start of winter, is coming. I thought that in the spirit of the impending holiday and the horrific season that Game of Thrones so cryptically warns us about, why not have a little fun? Now, by its very definition, it's clear that Thanksgiving is about giving thanks and appreciating life's blessings. Which is not such a difficult thing to do, right? Well, that's probably easier said for those of us who aren't Westeros inhabitants. Because as I'm sitting here trying to figure out whether or not I want to make a gravy boat or a volcano with my mashed potatoes, I was wondering what the Game of Thrones characters would say on Thanksgiving as they went around the dinner table, announcing what they were thankful for.

I mean, at first, second, or third glance, it doesn't seem like they'd have to much to be thanking anyone for. And I know for a fact not one of those peeps is going to thank George R.R. Martin for anything even if he was responsible for their birth in the first place. But believe it or not, even these down and out citizens have things in their lives to be grateful for (even if they aren't exactly sunniest or most traditional reasons of thanks).

Here's what the Game of Thrones characters probably have to be thankful for this year.

Is — I hope — most definitely thankful for Melisandre and her mad resurrection skills. Well, that is if dead men can be thankful.

Is probably thankful that everyone, no matter how pure or despicable, meets their untimely demise in Westeros. Here's looking at you, Ramsay.

Is thankful for magic and second chances (to reverse her blindness). Hopefully.

Is most likely thankful for aviation and the unique ability to get the F out of hairy situations in a flash.

Has got to be thankful for Tommen, her only living child. That, and her killer, fast-growing locks of gold.

Is, in a twisted way, probs thankful for Cersei. By complete default. Not for anything she purposely did for her, per say, but because she bore two sons who helped Margaery solidify her top notch status.

Things she's prob not as thankful for: Her imprisonment.

Is thankful for his damn self. Ain't nobody ever helped him do anything (except for the whole Lord Varys letting him go thing). So I guess he'd at least share some turkey with the dude and maybe he'd even pass him the gravy.

You know what I'm thankful for? That Game of Thrones hasn't offed Khaleesi or Tyrion. Yet.