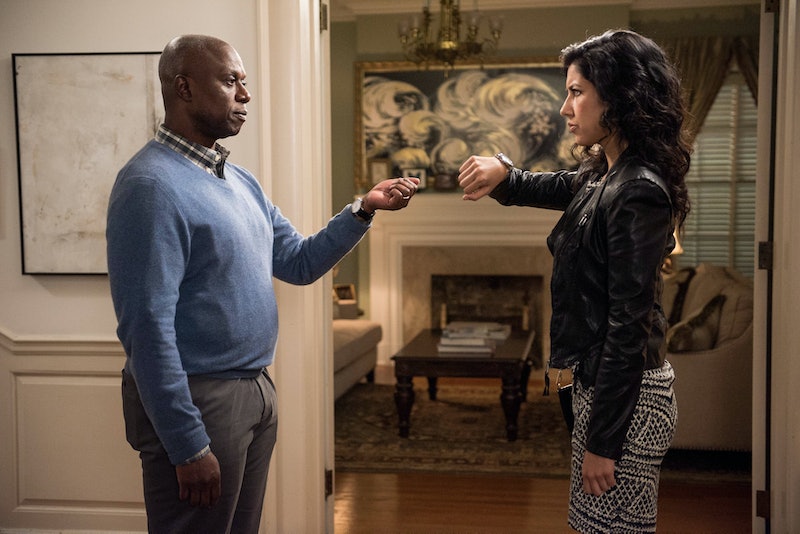 Sunday night's episode of Brooklyn Nine-Nine was unusual for a few reasons. For one, the cold open didn't take place in the precinct but as Jake and Charles were about to make an arrest. For another, most of the episode didn't have anything to do with police work but with a disastrous guys' trip with Jake, Charles, and Terry in the not-so-great outdoors. However, the most unexpected part of this episode of Brooklyn Nine-Nine was the outcome of Captain Holt's relationship advice for Rosa.

At the top of the episode, the sly sleuth that Captain Holt is read Rosa's body language and correctly determined that she was about to break-up with his nephew Marcus. Oh, Nick Cannon. We hardly knew ye Never one for emotions (and that's putting it incredibly lightly), Rosa wanted to let Marcus down easy and just text him "we're done" while he was sleeping. Captain Holt, who also rarely gets all warm and fuzzy inside, suggested she add "goodbye" at the end of the text so as to not come off as too heartless.

The difficulty with which Brooklyn Nine-Nine's toughest and most stoic characters tried to understand and talk about something like compassion and emotions was by far the most hilarious part of Sunday night's episode. Luckily, Captain Holt eventually realized that Rosa just sending a text would not be an appropriate way to end things with Marcus. He suggested that acknowledging Marcus' feelings will make getting dumped easier on him.

Rosa does exactly that, and though she tried to escape Marcus' place through the window when he started crying, she stayed, and they ended up taking about it for 20 minutes. At this point, you would think that Rosa would be livid at Captain Holt and would start planning her revenge on him for making her confront emotion. However, she actually agreed with Captain Holt's advice and said that this was the best way to end the relationship.

And then something completely unexpected happened: Rosa cried. She was so moved and saddened by the experience that she burst into tears. Now this is huge and something I thought we'd never see from Rosa, who tries so hard to not crack a smile, let alone be completely vulnerable for all the world to see.

Believe it or not, that wasn't even the weirdest part. Rosa explained that breaking up with Marcus didn't cause her tears; it was the fact that she broke up with him because he wanted to get married and she didn't, which made her worry that she might never be ready to get married, and thus, never find true love. As Captain Holt comforted Rosa in the only robotic way he knows how, he burst into tears, too.

There they were, the two most stone-faced members of the 99th Precinct blubbering like little babies. That's one of the things that I love about Brooklyn Nine-Nine, that though the characters can often be over-the-top, they really are complex under all of their shenanigans. Captain Holt and Rosa showed in Sunday night's episode that it can take as much courage for them to track down bad guys as it does to let someone else see them cry.