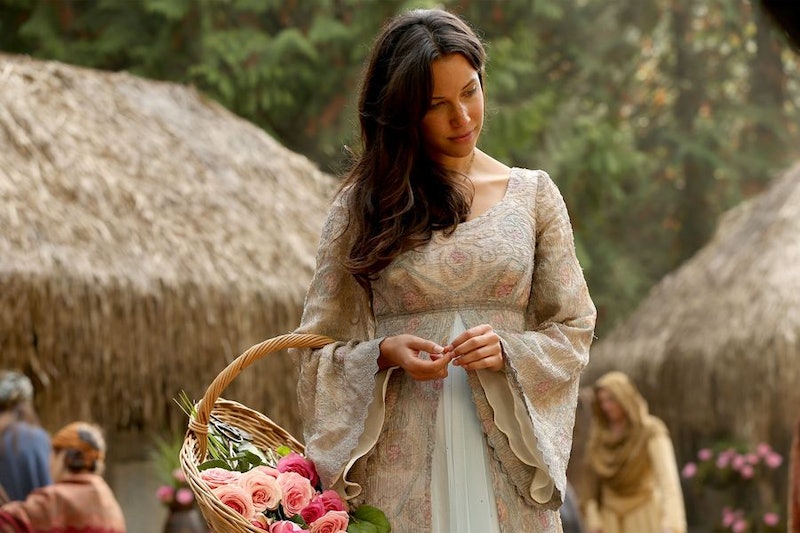 After spending most of the season trapped in a tree, this week's episode of Once Upon A Time, "Nimue," put Merlin in the spotlight, emphasizing the most human parts of the wizard's eternal life. The episode title refers to the love of Merlin's life, who he previously revealed the original Dark One had "destroyed." While many fans likely assumed that meant this Dark One killed her, it turns out there's way more to the story, as OUAT revealed that Nimue was the original Dark One, also making her the darkest and most powerful person. So technically yes, the Dark One destroyed Nimue, as Emma said, "you killed the woman [Merlin] loved, because you killed the woman you used to be."

We learned this in the Camelot timeline, as Merlin lead Emma to the site of Prometheus' flame, which they need to reunite Excalibur and the Dark One dagger. He asked Emma to conjure up the original Dark One, who possessed the flame's last ember, and revealed he knew who was behind the mask before Nimue showed herself. The story of her transformation was heartbreaking, especially because Nimue only became the Dark One in an attempt to be with Merlin forever.

About 200 years ago, Merlin and Nimue fell deeply in love, and not wanting to live forever only to watch her die, Merlin wanted to give up his magic and become a mortal. Nimue, however, wanted to make herself immortal instead, and secretly drank from the Holy Grail before Merlin turned it into Excalibur, planning to use it to cut out his own magic. Once she felt the power the Grail gave her, something changed in Nimue, and after pretending that a masked man named Vortigan killed her, she killed him, fully giving into the darkness and becoming the original Dark One. Soon after, Excalibur broke, creating the dagger we've become so familiar with.

Now we know the history of the Dark One, but the future is still unclear. If everyone succeeds and destroys the darkness inside Emma, which is connected to all past Dark Ones, could that somehow free Nimue? Emma said she could still feel her love for Merlin — maybe his happy ending can be restored, if the darkness is defeated once and for all.