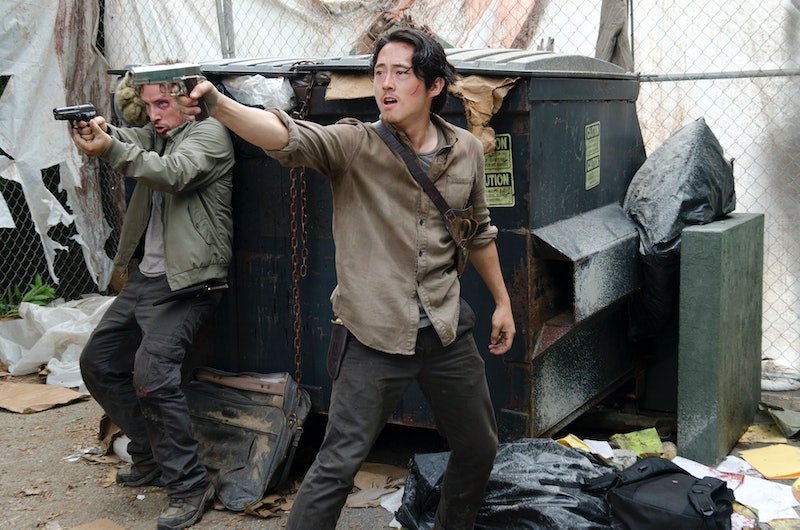 We're going to have to either accept some hard truths about whether Glenn is dead on The Walking Dead , or keep holding our breath for a little while longer. Steven Yeun wasn't in The Walking Dead credits again this week, despite being featured in the "previously on" scenes at the top of the episode. The actor was neither listed in the opening credits nor the "also starring" credits that came after. There goes my theory that Yeun has been bumped down to guest star.

What does it mean? Should we give up hope for the character's survival? Clearly not, as the executive producers have promised that Glenn Rhee's story is not over, though that doesn't mean he's still alive. Still, The Walking Dead is not always consistent with removing names once a character has been offed.

Honestly, I don't think this is the show trolling us with the credits. It's not a narrative choice, traditionally. Billing factors into how an actor gets paid, so this is more a legal issue than anything else. Last Sunday's Morgan Jones-centric episode only featured one of the main characters and two major guest stars, but they weren't the only actors in the opening credits. So, unless Yeun worked out something legally with the producers of The Walking Dead, this is legitimate. That doesn't mean, however, that he can't show up later in another episode — or even in this one. The credits will run at the end of the episode too, and sometimes a show will credit their "surprise" actors that way. Not everything is like Law & Order, where you can often pick out the murderer just by looking at which actor in the credits is the most famous.

Now this, on the other hand, is definitely some trolling.