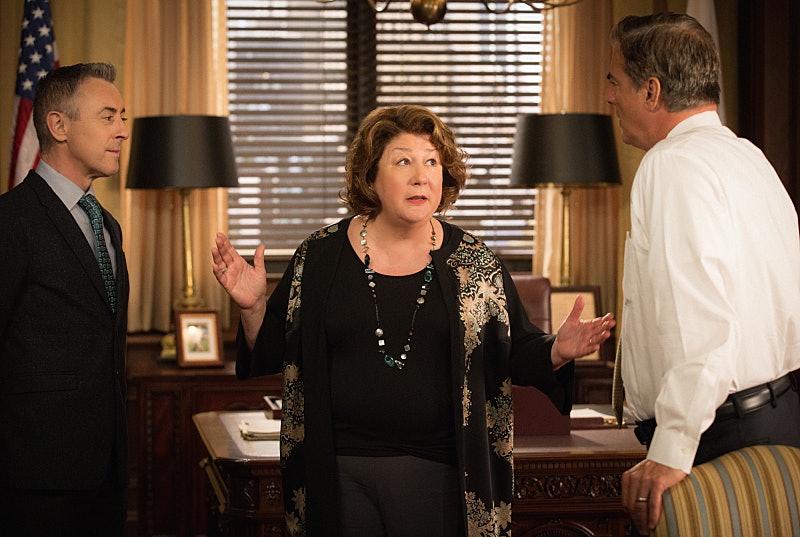 Eli's scheming finally came to fruition on Sunday night's episode of The Good Wife , but not in the way he hoped. With his role as Alicia's campaign manager secured and Peter about to announce his candidacy for President, Eli was poised to get his revenge on Ruth Eastman in "Lies." Yes, Eli's revenge plot would have some negative blowback on Peter, but it wouldn't damage him permanently. All seemed to be going according to plan, until Eli discovered that Peter set up the voter fraud during Alicia's run for State's Attorney. So, will Eli go through with his plan and destroy Peter in the process?

Before Eli found out about Peter's involvement in Alicia's failed campaign, he manipulated Ruth into asking for Frank Landau, the DNC chair who left Alicia out to dry when she was accused of voter fraud, to introduce Peter's official campaign launch. His plan: to then reveal that Landau was responsible for the voter fraud, not Alicia, thus discrediting Landau and embarrassing Peter's campaign. The campaign would take a hit, which would, ideally, lead to Ruth Eastman's dismissal, leaving Eli to return as Peter's campaign manager. Alicia's reputation would be protected, Ruth and Landau disgraced, and Eli victorious.

We finally saw Eli's little backdoor deals from throughout the season come together. First: call in a favor with Landau and ask him to introduce Alicia at an event, knowing that Ruth would want Landau for Peter. Second: call in a favor from Judge Don Schakowsky, the Bond Court judge who owes Eli a favor for giving him a head's up about a bribery set up. Schakowsky was to retrieve evidence of Landau's involvement in the voter fraud, which Eli would then expose. Unfortunately, Schakowsky came back with evidence of Landau and Peter's involvement in the crime. Not only did the idea to hack the voting machines come from Peter, he let her take the hit when it all came apart.

Eli has yet to make a decision on whether or not to use this information to get his revenge on Ruth. On the one hand, it would clear Alicia of any wrongdoing, but it would also destroy Peter's political career and hurt Alicia, one of Eli's only friends. Looks like revenge isn't all it's cracked up to be.