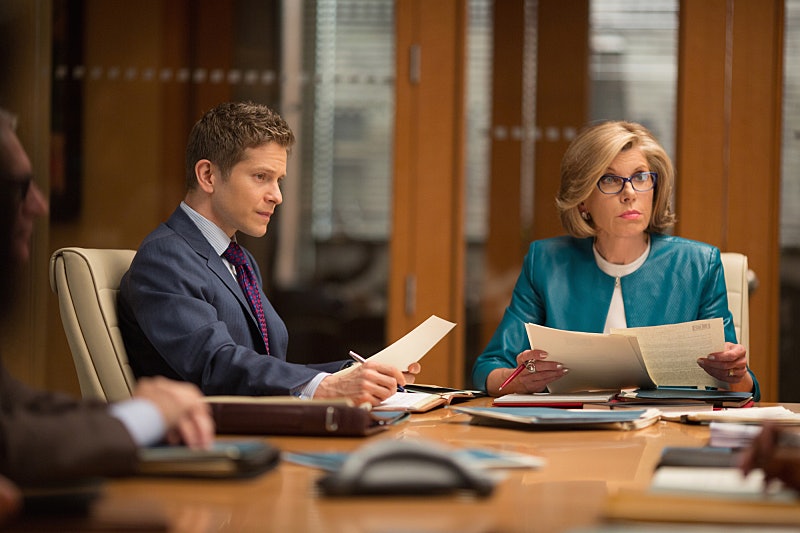 Finally, this Sunday night's episode of The Good Wife acknowledged the lack of diversity at Lockhart, Agos & Lee. Early in the episode, each member of the hiring committee — Diane, Cary, David, and Howard — were seen interviewing Monica Timmons, a young black lawyer from Baltimore starting out her career. The white men in charge, particularly Cary and David, force Diane to turn Monica down for a job because she supposedly "isn't as qualified" as three other white male candidates, thus sparking a series of events that forced the law firm (and The Good Wife itself) to come face-to-face with its distinct diversity problem.

Monica didn't attend a top-tier law school, and her LSAT scores aren't the best, but Diane sees something in her. In her interview montage with all four members of the hiring committee, Monica fields leading questions about her hometown — "Baltimore, bad neighborhood?" asks Cary — as well as her ethnicity — "We don't get a lot of black lawyers," states Howard. Even Diane, who sees potential in Monica as a young female lawyer, notes that she is exactly the "kind of diversity" they're looking for. Though Diane lobbies for the firm to hire Monica and calls out Cary and David for wanting to hire more white men like themselves, she is outvoted and must inform Monica that she did not get the job.

However, she likes Monica, and so brings her in for a face-to-face meeting, offering to give her advice in the future. Monica, however, isn't thrilled by the offer. In retaliation, she releases a video clip of her various interviews at the firm, calling out their ignorance and racism.

After seeing the video, Diane again reached out to Monica and attempted to relate to her as a fellow female lawyer, but Monica shut her down. As a white woman, she said, Diane had a choice as to whether or not she wanted to demean herself to advance her career, but she has no choice in how she is unfairly stereotyped and persecuted because of the color of her skin. She doesn't need pity, Monica says, she needs a job.

The speech itself was powerful, leaving Diane in awe, but it went further than that. When Monica calls out Lockhart, Agos & Lee for hiring only white men, she is also calling out The Good Wife for casting mostly white actors. When Monica exposes Diane's ignorance facilitated by white privilege, she exposes The Good Wife as a female-driven show that still lacks in ethnic diversity. It's true that The Good Wife has cast a few semi-regular non-white characters on the show, but that doesn't change the fact that just like a majority of network television, it has a predominantly white cast.

It's unclear what the writers' goal was with Monica's storyline — was it to advocate for more racial diversity or simply call attention to the fact that these characters that we like, that we know, can be discriminatory and racist? Whatever the motive, it begs the question, now that The Good Wife has exposed the lack of diversity in the world of Lockhart, Agos & Lee, is it ready to do something about it in the real world?