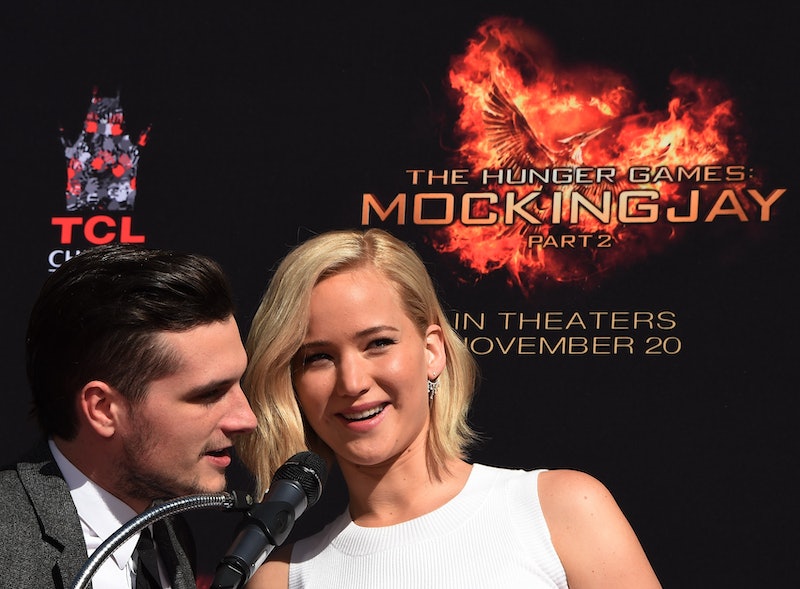 Not to belittle the rebellion or anything, but inquiring minds still want to know: will Katniss and Peeta take their relationship to the next level in The Hunger Games: Mockingjay, Part 2 ? They've done so much already as a pseudo-couple: started a national revolution, became the Capitol's favorite sweethearts, and even made Effie Trinket realize that she cares about something other than her look of the day. With the Hunger Games franchise wrapping up, the Team Gale/Team Peeta argument will finally be put to bed, and possibly Katniss and Peeta with it. So will Katniss and Peeta have sex in Mockingjay, Part 2? Let's consider the evidence on either side.

Perhaps this doesn't even need mentioning, but Mockingjay is based on a book of the same name. (Just covering the bases!) Suzanne Collins' novel doesn't include any explicit language regarding a physical coupling of Katniss and Peeta, though readers have been arguing their own interpretations of a few choice lines since it hit shelves in 2010. Katniss' narration in the book's final chapter before the epilogue references a "hunger" for Peeta that had pulled at her insides before. That's a weighty word, and certainly one the implies passion.

But his arms are there to comfort me. And eventually his lips. On the night I feel that thing again, the hunger that overtook me on the beach, I know this would have happened anyway.

But Katniss goes on to describe how her feelings for Peeta are different than the ones she has for Gale. Peeta gives her "the dandelion in the spring...the promise that life can go on." So maybe the "hunger" is more for hope than it is for anything physical. Of course, those two things can go together. This passage (ending with the heartbreaking final "real or not real?") can mean what the reader would like it to, I think. And Hunger Games fans are still fairly divided.

The most compelling piece of evidence in the pro-sex column is a hard one to argue. Eventually, Collins writes, Katniss and Peeta have children of their own. And I'm no biologist, but I'm pretty sure intercourse typically has to happen to make that possible. Peeta is still suffering the lingering effects of his hijacking after the rebellion, so it takes Katniss a whopping 15 years to bring him around to the idea of having a family. That means that if the movie were to be faithful to the book in that regard, that sex scene would have to come after a huge time jump. Which would be pretty weird for a conclusion. I'm guessing the narrative will skip straight to the kids; a domestic scene would provide better closure after a very rough two movies for poor Peeta.

I know Peeta would be into it, for sure. He’s very sensitive, in touch with his emotions...I think it really might solve a lot of their problems. You know what? I’m going to pitch that idea.

Did Hutcherson's saucy appeal to the filmmakers pan out? You'll have to see Mockingjay, Part 2 in theaters to find out.