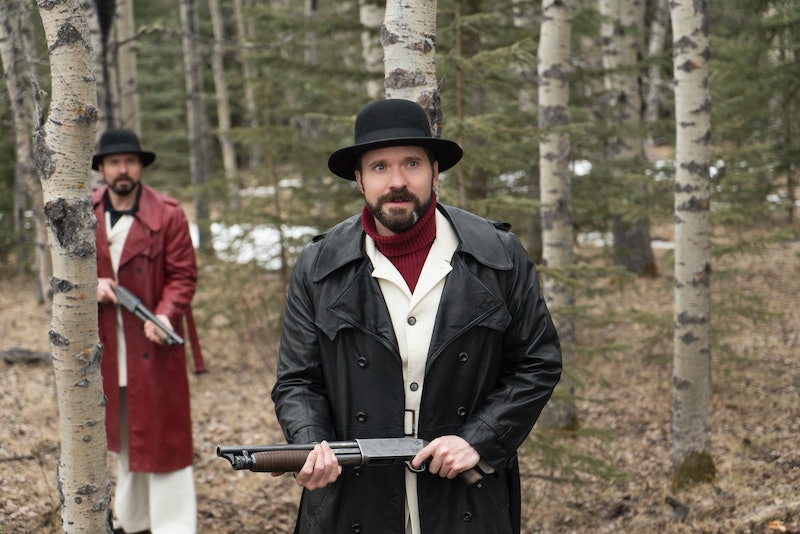 Ever since it was announced that Season 2 of FX's Fargo would be a prequel to the first season, we knew that events would eventually climax with the Sioux Falls Massacre, the bloodbath teased in Season 1 by an elderly Lou Solverson. The only mystery was how exactly it would go down, and who — if anyone — would survive. But what viewers probably weren't expecting was for the massacre to begin barely halfway through the season. But with this Monday's episode, "The Gift Of The Magi," the massacre has officially begun.

Sure, there have been plenty of casualties before now. The season kicked off with Rye Gerhardt's impetuous triple-homicide in the Waffle Hut. Shortly thereafter, Rye himself became the victim of a murder when he was hit by Peggy Blumquist's car and finished off by her husband, Ed. These events set off a chain reaction of violence that culminated in this week's unexpected shootout between the Kansas City mob and the Gerhardt crime family. We've only just now arrived at Season 2's 50% mark and already the bodies are starting to stack up to dizzying heights.

The episode opened with Joe Bulo, the Kitchen Brothers, and various other gangsters in the employ of the Kansas City mafia go on a hunting trip in the frozen Minnesotan landscape. But the hunt is barely underway when they're ambushed by Ohanzee Dent and the rest of the Gerhardt family's lackeys. By the time the guns are done firing two minutes later, there's only two men left alive: Ohanzee and one of the Kitchen Brothers. Yes, tonight we said a surprise goodbye to multiple-Emmy-winner Brad Garrett as mild-mannered mob manager Bulo (whose decapitated head ended up in a hat box sent to Mike Milligan), as well as one of the mute identical twins. (Honestly, it's impossible to tell them apart.)

And the body count didn't stop there. When Ohanzee came back to the Gerhardts' North Dakota ranch with news of Rye's death at the hands of a simple butcher, Dodd alleviated his mother's despair by crafting a clever lie: it wasn't just a butcher in Luverne who killed Floyd's youngest son — it was The Butcher Of Luverne, an infamous and deadly hitman hired by the Kansas City mafia to take out the Gerhardt scion. (The belief that Kansas City was responsible for Rye's death is what led to the opening shootout in the first place.)

And so Dodd dispatches another henchman to take care of Ed Blumquist. His nephew Charlie insists on riding along; he says since a Gerhardt was killed, then a Gerhardt needed to pull the trigger. Dodd happily acquiesced. But when Charlie entered the butcher's shop and encountered sweet (if morbid) Noreen, he got cold feet. He only came back later when it seemed as though Noreen had left for the day... except it turned out that she was only in a bathroom. Her sudden appearance distracted Charlie, allowing Ed to get the drop on him. In the ensuing scuffle, the Gerhardt assassin was dead with a cleaver in his skull, Charlie was wounded with the assassin's bullet in his gut, and the butcher shop was in flames.

This may not have been THE "Sioux Falls Massacre" that Lou and other characters referred to in Season 1, but that's not exactly good news. Apparently whatever goes down in Sioux Falls at the end of the season is so gruesome it makes this week's bloodbath look tame by comparison. I can only imagine that this means the carnage we'll be witnessing in this year's finale will be of unprecedented proportions.