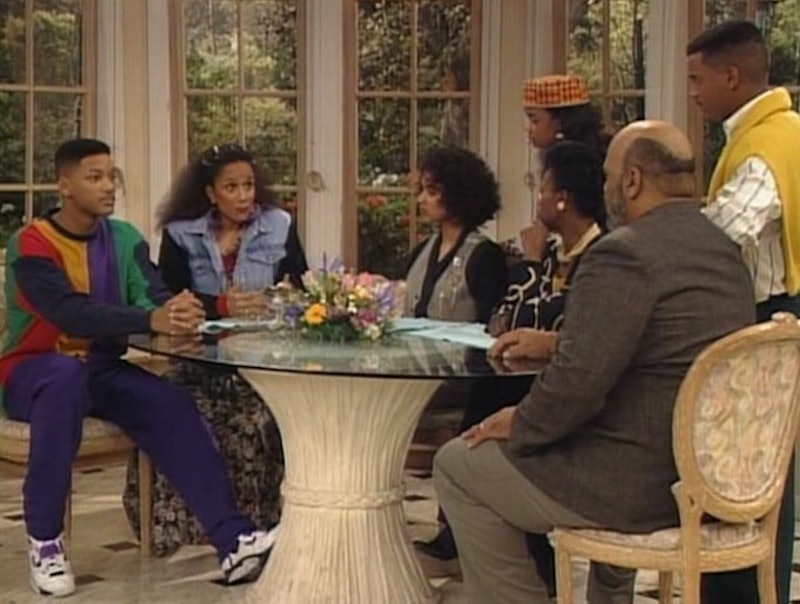 Now this is a story all about how The Fresh Prince of Bel-Air was straight up, the best show on television. I mean, watching The Fresh Prince of Bel-Air after school had become a serious tradition of mine, not dissimilar to the traditions of everyone's favorite American holiday, Thanksgiving. Which is why a Fresh Prince Thanksgiving special marathon totally makes sense and will always be the perfect way to partake in the holiday's festivities. Honestly, re-watching these episodes will make you forget all about football (what even is football?) and that outdated parade. Wouldn't you rather witness the antics of DJ Jazzy Jeff and a (practically) fetus Will Smith? Same. I don't really need to see a Snoopy balloon that's larger than my apartment, anyway. Once is enough.

Anyway, all you need to get this marathon going is approximately 5 slices of pie, preferably pumpkin, and some place to watch the show, preferably a throne. (Unfortunately and blasphemously, The Fresh Prince of Bel-Air is not available on Netflix in the U.S., but you can order it on DVD.) Here are all the episodes that pair well with your stuffing, potatoes, et. all on Thanksgiving and actually, now that I think of it, every day of the year. Yo home, the Bel-Air!

Reasons to watch: First of all its Season 1, so Will Smith and the gang look extra baby faced. Secondly, the plot revolves around the "children" cooking and feeding the adults, so of course hilarity ensues. As in, Geoffrey the Butler throws shade, Hilary freaks out about "doing work," and all the usual suspects say/do excruciating things.

Reasons to watch: Well, it's only one of two (three, if you count them in part) Thanksgiving specials, so it's obvious that this episode will be new and uhm, "fresh." Basically, Hilary's TV show is filming at a homeless shelter, so she has to volunteer, and Carlton comes with her. Philip hurts his back, and Will suggests that the two go to a massage parlor in an effort to ease the pain. Let's just say that everyone ends up getting more than they bargained for.

Reasons to watch: Because if you started part 1, you have to finish part 2. We also get to see a family television show discuss "Happy Ending" massages (not kidding) and witness Hilary become, if only for a moment, a better person. Oh, Thanksgiving. You really do bring out the best in people.

I think it's clear that this year, I'll be giving thanks to The Fresh Prince of Bel-Air.