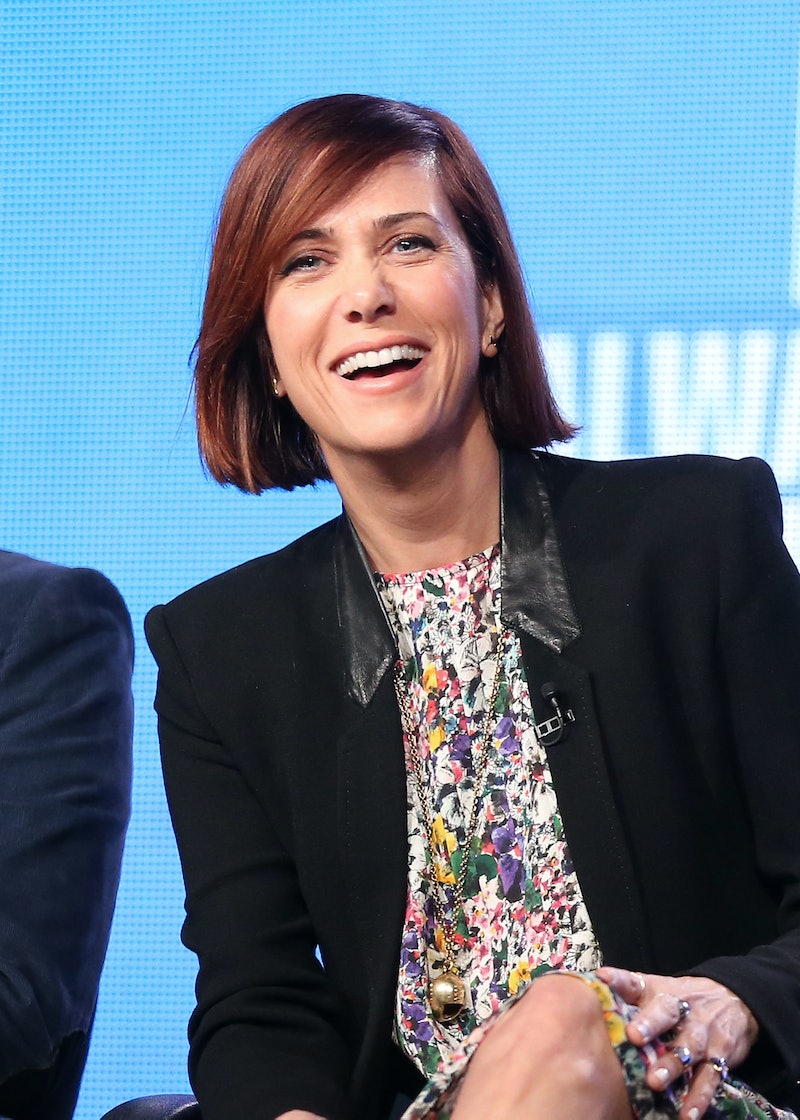 There is something to be said for not looking a gift horse in the mouth, and for comedy superstars like Kristen Wiig and Amy Poehler, that gift horse was SNL, the sketch show that launched their careers and the series that's come under fire for its grand lack of diversity throughout its 38 and a half seasons. But now neither comedy heroine — especially ones as praiseworthy as Poehler and Wiig — will respond to questions about the recent SNL diversity issue.

In two separate interviews, SNL alums dodged the question about SNL's long-standing diversity problems, most notably, the lack of women of color in the cast and in the writers' room. Poehler, speaking to The Hollywood Reporter in support of her Golden Globes hosting gig, was asked whether or not she thought the criticisms of SNL were founded. She had only this to say: "Ugh. I don't want to talk about this. Pass."

Then, Thursday, during the Television Critics Associate Winter Press Tour, Wigg — along with fellow SNL alums Matt Piedmont and Andrew Steele — fielded questions for their new IFC series Spoils of Babylon when one reporter asked about SNL's recent measures to correct its diversity problem. According to a play-by-play on Deadline, Wiig appeared uncomfortable and offered only this to the conversation: "I.....uh... [sic] am excited about the new hire ... it's great."

Her fellow SNL alums weren't too chatty either, with Piedmont attempting a deflective joke — "I always thought [SNL] should have more toddlers" -- and Steele actually landing the conversation-ending joke — "Congratulations to the people who got hired at SNL, and their diversity." Steele also made sure to assert that he and his fellow alum are "very removed" from SNL.

And sure, SNL creator and producer Lorne Michaels is a powerful man, and it might feel a bit bold (and slightly boring) to come out and say, "Yes, SNL has lacked diversity in the past" or "It's wonderful that they're taking measures to correct the diversity issue," but could it ultimately really do any harm? It's not as if by speaking up, these former cast members and writers would be seconds from picketing outside of 30 Rock and lambasting the series — it's not entirely incendiary to say that diversity has been an issue, but good for SNL for trying to fix it.

Hell, even Jay Pharoah — a current cast member who has daily contact with Michaels — was open enough to speak out against the lack of women of color. It's arguable that as someone actually on the show, he stood the most to lose for being completely honest.

More likely than not, Wiig and Poehler are simply following the professional rules someone posts on your LinkedIn feed approximately once an hour: never bad-mouth a former employer to prospective employers. And since comediennes in the spotlight are constantly "interviewing" for their next role by garnering publicity, it would stand to reason that being on panels or participating in an interview with a major entertainment publication would fall into the category of places to stay mum.

Still, in the entertainment world, there's a certain level of leeway actors and actresses have to be a little more outspoken than most people. I'm not suggesting that Wiig goes on SNL and rips up a photo of Lorne Michaels on stage, but the simple use of her well-oiled mind to drum up some sort of opinion on the raging debate that, by the way, says something about the comedy world in general shouldn't be too much to ask.

More like this
Sandra Bullock, Girlboss Extraordinaire
By Matt Harkins & Viviana Olen
Everything To Know About 'Grey's Anatomy' Season 19
By Brad Witter
The Grey's Anatomy Season 18 Finale Finally Revealed If Japril Got Back Together
By Brad Witter
Britney Spears Met The Weeknd & Sam Levinson, So She May Actually Be On 'The Idol'
By Jake Viswanath
Get Even More From Bustle — Sign Up For The Newsletter