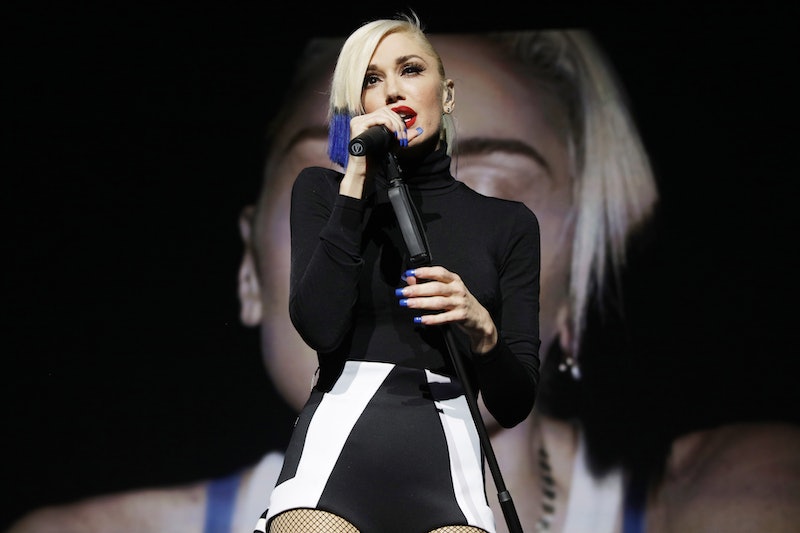 No Doubt's Tragic Kingdom changed my life in many ways. Sure, I was not even a teenager and probably entirely too young to be jumping on my bed and singing along to some of the songs, but my love for Gwen Stefani was awoken and it hasn't died since. When "Don't Speak" came out, it was clear that her knack for honest and heartbreaking songwriting set her apart from many of her pop/rock counterparts. Her relationship with band member Tony Kanal (which inspired "Don't Speak") had ended, but her career had only just begun. Now, in 2015, Stefani has recently split from husband Gavin Rossdale and is ready to release some more of her amazingly honest music — something she spoke about in an interview with Jojo Wright of KIIS FM.

I was so excited to listen to her latest single, "Used To Love You," because as hard as her break-up was, Stefani was back in my life. Selfish, I know, but it seems like she is once again using her music to heal her wounds, and I will be forever grateful. During her Monday interview with KIIS FM, Stefani opened up about how her split from Rossdale was what led to the catharsis of her new album. She told Wright,

I had been writing because my life blew up... Everybody knows that my life blew up last February. I'd just been dealing with that. Unexpected. I was going along thinking that was going to be the rest of my life and it's not. I don't know what happened.

Ugh. I can't even begin to start talking about how immensely sad I was when I found out that Gwen and Gavin were over, but it's safe to say that Stefani is healing and moving on to some other things (ahem, Blake Shelton). Still, it's always interesting to hear how the process begins for an artist like Stefani, who has always captured heartbreak in the most relatable way.

There was one night, the epicenter of the whole thing — that's the most I can say about that — and the next day I wrote the chorus to "Used to Love You"... But I didn't know it was "Used to Love You." I just had written all this stuff and it had happened to be in there buried in a bunch of lyrics that I had written.

What is really beautiful is that she found herself in her music, which is what she always strives for. She said,

I've always wanted to write music so desperately because doing it is one thing that really validates me for myself... Being able to songwrite and look back at those treasures of music is just everything to me. But there's been a lot of insecurity about it, and times where it doesn't work.

In the interview, the 46-year-old admits that last year she tried to sing music that other people had written, but that "it just didn't feel right... I just knew I needed to write." Yes, you did, Gwen. Just last week, she told Ryan Seacrest that being honest in this phase of her life is the only thing she is interested in:

I don't know about you, but I cannot wait to hear everything Gwen Stefani has to say. Now and always.