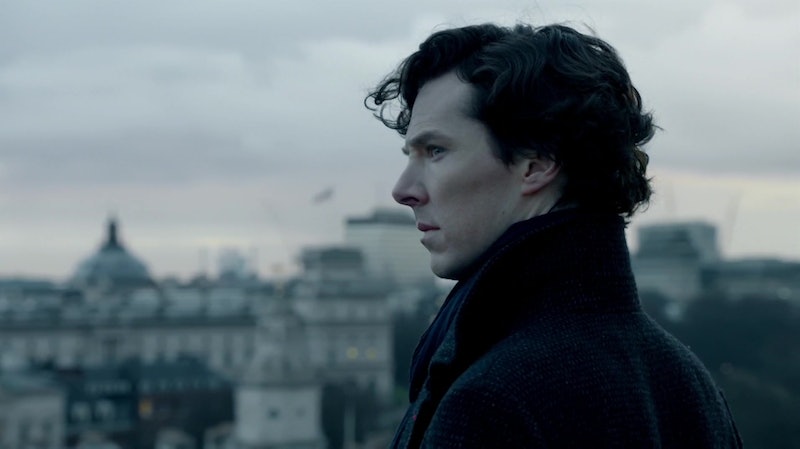 It's every Cumberbabe's dream to solve mysteries with Benedict Cumberbatch, and the new Sherlock coloring book lets you do just that. Based on the hit BBC series, Sherlock: The Mind Palace: The Official Colouring Book offers artists the opportunity to color-in character portraits and scenes from the show. If you've ever wanted to know what it looks like when Sherlock and Mycroft play Operation together, you need to pick up this book.

More interesting than that, however, is the fact that the Sherlock coloring book features hidden clues that will only be uncovered once you've filled in the blanks, so to speak. The first pages show you what you're looking for, from a deerstalker hat to a deadly boomerang. After that, it's up to you to find those items hidden in the illustrations.

The clue-sniffing feature has Sherlock fans talking, because it might have confirmed a major fan theory involving one of Sherlock's deadliest enemies. Fans are pretty split over whether or not the series' creators would release information of this magnitude in a coloring book; it could be coincidence, after all.

SPOILER WARNING: If you don't want to know, jump ahead and begin reading again below the cover image. You have been warned.

So way back in series one, "The Great Game" found Sherlock targeted by a sniper working for Moriarty. Fans theorized that this was none other than Sebastian Moran: Moriarty's right-hand man in Sir Arthur Conan Doyle's stories, and a noted marksman. But Moran never materialized in the show.

Fast forward to series three. In "His Last Vow," John's new wife, Mary Morstan, is revealed to be a former assassin — and an expert shot. Viewers never learn much about Mary, because John deletes information about her past and decides to forgive her. Moriarty, who was believed to have committed suicide in "The Reichenbach Fall" reemerges at the end of the episode.

Some fans believe that Mary is, in fact, the Sherlock-version of Sebastian Moran, citing the similarity in the characters' surnames as well as their overlapping skill sets.

The Sherlock coloring book appears to confirm this theory. Mary's engagement ring is one of the coloring book's hidden clues, and it can be found hanging above the pool in "The Great Game." You know, the scene where Moriarty's sniper friend lasers in on Sherlock? Yeah.

The Sherlock coloring book hits international store shelves on December 22. Fans outside the U.K. can pre-order it now. If anyone needs me, I'll be in my mind palace.