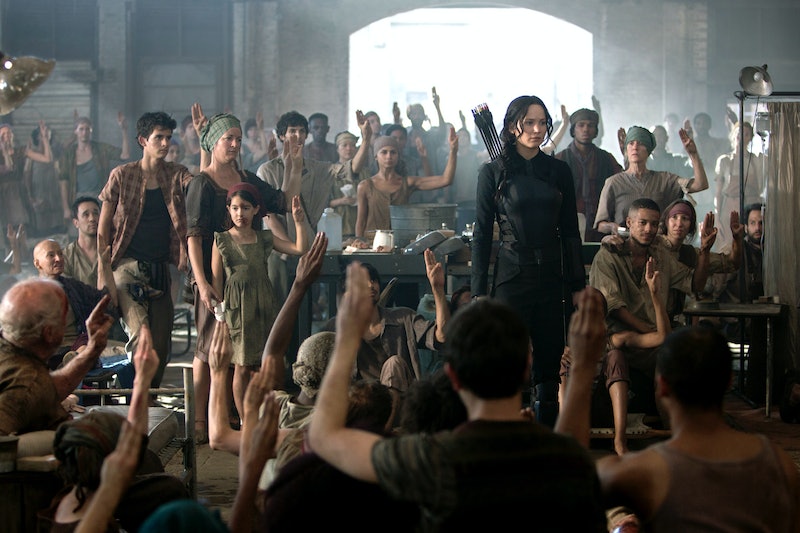 Mockingjays, we've got quite the mystery on our hands! As we edge towards the release of The Hunger Games: Mockingjay, Part 2 in theaters Nov. 20, we rush even closer to the thrilling conclusion of Suzanne Collins' story. While fans may have knowledge of how everything ultimately ends in the books, there's still nothing that beats the full silver screen experience while surrounded by your fellow Tributes. Funny enough, despite having a complete book series and film series to boot, there are some questions and speculations concerning The Hunger Games that have no definite answer — such as the specific locations of the districts, in particular, where is District 13, a.k.a., the MVP of the Second Rebellion.

But first, let's start with what we already known about Panem, the post-apocalyptic nation in which The Hunger Games takes place, and its geography. Sometime in the future, the Earth and modern civilization as we know it was faced with a catastrophic event that affected the size and shape of world landmasses — rising sea levels also adding onto the devastation. After the event, Panem was established in primarily what is known to be the remains of North America. It is unknown whether or not Panem is the only nation on the Earth left.

Despite existing in the remains of North America, Panem isn't as large as the continent we know today, as Katniss says in the books, since North America was affected by sea-level flooding, thus drowning out large portions of land. From there, North America was divided into 12 districts, with the Capitol acting as the ruling government location and figure. District 12 is said to be located in the Appalachia, while the Capitol is situated in the western Rocky Mountains — which means we know the Capitol is located near the West Coast, but probably as inland as possible, considering that states located seaside, such as California, were lost in the aftermath of rising sea levels during the whole big doomsday event (and for all we know, California becomes the new Atlantis).

The Appalachia region, on the other hand, sits pretty on the East Coast. The region stretches from the south of New York state and extends to the northern territories of Alabama and Georgia — encompassing parts of Pennsylvania, Ohio, Virginia, West Virginia, North Carolina, South Carolina, Kentucky, Tennessee, and Mississippi. And it includes District 12, where the main industry and occupation for the residents is coal mining — which is ridiculously accurate when we look back at what the region is known for in the real world. The economy of the Appalachia region has been intertwined with the industry of coal mining for decades.

We also know that to walk from District 13 from District 12 on foot takes about a week. From this information, it's safe to assume that District 13 is fairly close to the Appalachia region as well. Since a majority of the Appalachia region is based within the southeastern U.S., we can assume that District 13 is situated in the northeast — once again, inland, if we assume areas near the ocean have been doomed to underwater graves. According to Hunger Games canon, District 13's main industry was nuclear technology (along with mining graphite). It also produced weapons for the Capitol before the onset first rebellion, which makes it the perfect district to spearhead the Second Rebellion. The northeast also makes for an accurate location of District 13, as it's home to several nuclear power plants in the reality.

So what can we take away from all of this? First and foremost is the fact that Suzanne Collins obviously did her homework in constructing the fictional nation of Panem and its districts based on real-world industries. Secondly — I'm betting money that District 13 is located is in New York near the Lake Ontario area (based on the hub of nuclear plants placed there in the real world), with District 12 somewhere in northern Pennsylvania, keeping that lovely idea of a week-long walk in mind.