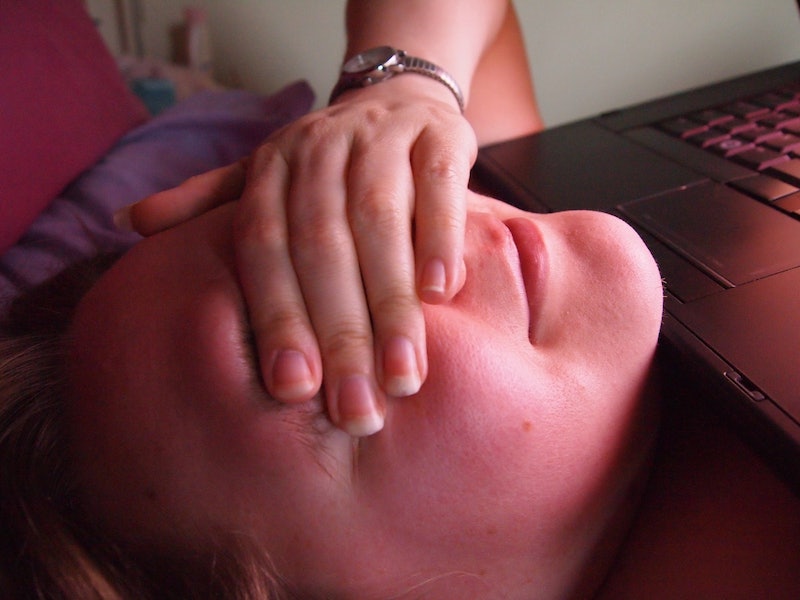 As time passes and '90s kids grow older, our sense of nostalgia grows, too. Understandably, of course — we were lucky enough to come of age during the era of girl power, boy bands, weird toys, grunge fashion, and TRL. Who wouldn't want to revisit that? However, as much as we'd like to don our rose-colored glasses and view the '90s through the lens of unrealistic perfection, the reality remains that a lot of uncomfortable things happened in the '90s. In a decade full of defining cultural and political moments, some were definitely better than others — and indeed, many of us may wish we could wipe those "others" from our collective consciences in the hopes that we c forever avoid a repeat of the secondhand embarrassment we suffered through back then.

Alas, until Marty McFly and Dr. Emmett Brown actually deliver on the whole time-jumping DeLorean thing, there is no way to purge our favorite decade of these deeply awkward moments. They happened, and they will always live in the public realm (thanks a lot, Internet). Some led to changes in the very fabric of society, while others simply made us wish we could change the proverbial channel of our mind's eye. Still, you can't take the good without the bad, as they say. So let us take few moments to reflect upon some of the uncomfortable '90s moments the universe doled out to maintain some sort of cosmic balance. I mean, it just wouldn't have been fair to enjoy a decade like the '90s without a few gaffes, would it?

While it's quite possible everyone in the free world did the Macarena at the height of this dance craze's popularity, watching the prickly Joint Chief of Staff/future Secretary of State bust out those signature moves in 1996 during the 1996 Democratic National Convention made us want to avert our eyes — yet, we couldn't. It was so bad, it was actually good. Powell wasn't the only politician who leaned on the dance to try to capture pop culture points during an election year, either. Al Gore joked about it, Bob Dole (more on him below) used it as an excuse for falling down the stairs, and even Secretary of State Madeline Albright gave it a go.

In the '90s, virtually no man in Hollywood held a candle to swoon-worthy Hugh Grant, thanks to rom-coms like Four Weddings and a Funeral, Nine Months, and Notting Hill. Suffice it to say, it was a bit of a shock when everyone's favorite dreamboat was arrested in 1995 and charged with lewd misconduct in a public place (a misdemeanor) with sex worker Divine Brown. Then 34, Grant pleaded no contest and was fined $1,180 for the incident and placed on two years' summary probation. Upping the uncomfortable quota of it all, of course, was the fact that the actor was in a then-serious relationship with fellow entertainer Liz Hurley.

3. Sinead O'Connor Took On the Pope

It would be the rip heard round the world — in the middle of her SNL performance on Oct. 3, 1992, Irish rock singer Sinead O'Connor pulled out a picture of Pope John Paul II and tore it to pieces. Let's rewind. The act of defiance against alleged sexual abuse in the Catholic Church occurred during the second song of O'Connor's set, "War" by Bob Marley (already a controversial song of the times). For added effect, the singer wore all white and sang a capella, at the end of which she shouted, "Fight the real enemy!" and proceeded to tear aforementioned picture. Viewers who considered O'Connor's behavior blasphemous flooded NBC with complaints. It was a surprise to everyone, and one that will forever be remembered for its shock value.

4. Lorena Bobbitt Got Creative with a Carving Knife

In 1993, falling under the umbrella of s**t you cannot make up, Virginia woman Lorena Bobbitt cut her husband's penis off with a carving knife while he slept. She then left their apartment with his severed man parts in tow and drove away, throwing his penis into a field somewhere along the way. After realizing the severity of what she'd just done, Bobbitt called 911. A exhaustive search of the field did, in fact, yield the severed penis, which was reattached in a nine-and-a-half hour operation. Lorena was found not guilty due to temporary insanity.

What came next proved even more uncomfortable (well, maybe not for him) — John Bobbitt first formed a band called The Severed Parts and, in the late '90s, appeared in a string of adult films like John Wayne Bobbitt's Frankenpenis.

5. Milli Vanilli Had Their Grammy Revoked

In November of 1990, LA Times staff writer Chuck Philips made a shocking claim: That beloved pop duo Rob Pilatus and Fab Morvan — best known as Milli Vanilli — were not the actual vocalists responsible for the multimillion-selling 1988 album "Girl You Know It's True." Frank Farian, the producer who had originally recruited Pilatus and Morvan for the group, later admitted that the duo did not sing their own songs; then, in an unprecedented move, the National Academy of Recording Arts and Sciences actually rescinded Milli Vanilli's 1989 Best New Artist Grammy. Yowch.

Yes, as in Bob Dole the former presidential contender. Bob Dole the Republican Senator. That Bob Dole. In 1998, the politico starred in a television ad campaign to raise awareness about impotence. The commercial itself was so awkward and so strange, set to a score of serious music and the stirring plea to have courage in discussing erectile dysfunction, that it was impossible not to watch. And definitely impossible not to watch without that familiar flush of secondhand embarrassment brighten your face.

I'm not talking about the movie, you guys. In 1991, the world cringed for Kiefer Sutherland when Julia Roberts called off their nuptials days before the wedding. We cringed further still when America's sweetheart nearly immediately hopped a jet to Ireland with her ex-flame Jason Patric — leaving everyone bewildered and unsure of what to say, none more so than Sutherland. Ironically, Roberts would later on to star as a serial ceremony-ditcher in the 1999 hit movie Runaway Bride, opposite Richard Gere. But, like the movie, this story has a happy ending. Roberts has since founded wedded bliss with cameraman Danny Moder, whom she married in 2002, and Sutherland has since forgiven Roberts for jilting him.