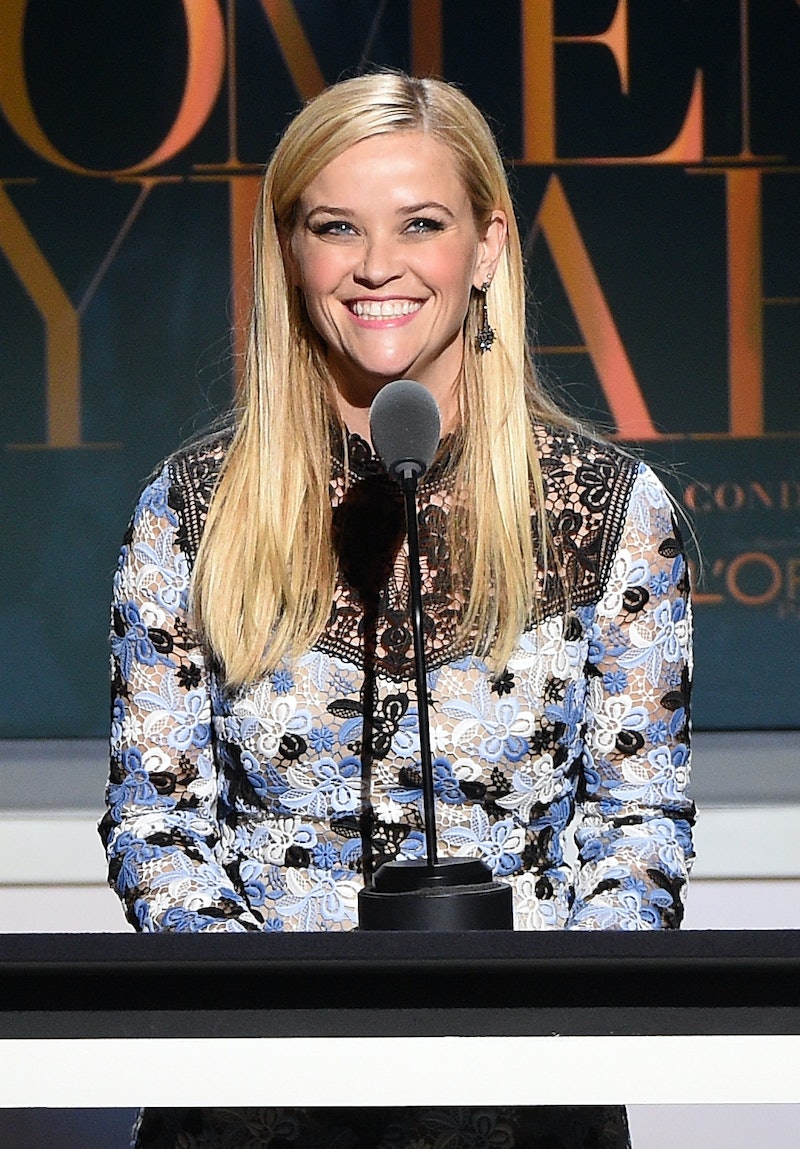 No three women have been more influential in continuing the conversation about women and equality in Hollywood lately then Reese Witherspoon and Amy Schumer, and, of course, Amy's newest gal pal Jennifer Lawrence. On Monday, Glamour magazine held their annual Women of the Year awards in New York. During the 39-year-old actress's speech, she stated that Witherspoon wants to produce Amy Schumer's biopic. We, and everybody else in the world, are absolutely obsessed with this idea, because Witherspoon, Schumer, and Lawrence have been integral parts of the conversation this year regarding equality for women.

On the surface, they may seem to be three women from completely different spheres of the entertainment world, but they would actually make the perfect movie magic. While they are like minded in their quest for equality, they also have a great sense of humor and a poignant outlook on the world, which will add to the ultimate movie perfection. With Schumer and Lawrence on screen, and Witherspoon in charge of the details, this would be the best film to hit Hollywood maybe ever.

Here are a few of our favorite quotes from the women that prove a collaboration needs to happen.

1. "I hope Amy Schumer and all the other nominees that when you consider making your biopic, you’ll give me the rights first, which would be great. Although Amy, I’ll have to play your grandmother in the movie (by Hollywood standards), and you’ll probably have to play your own mother." —Reese Witherspoon

It was the quote heard round the world. When Reese Witherspoon gave her speech at the 2015 Glamour Women of the Year Awards, there were many quotable anecdotes from her speech, but none rang more true than these words. This may be the case in Hollywood now, but Witherspoon is on a mission for change.

You mean we determine our own self-satisfaction in this world? Well said, Schumer. Beautiful words from a beautiful woman.

3. "Boxing is like stand-up. Getting hit in boxing really made me feel stronger as a stand-up, because it's like having your worst fears happen to you. That give you power, because you're no longer scared of it happening any more. You got hit, and it hurt, but you're okay." —Amy Schumer

A movie about Schumer's life would be so chock full of these moments. I'm sure this would prove women can handle anything and everything. Actually, a boxing comedy with Schumer as the lead may not be a bad idea for these two.

4. "Confidence is everything in this business." —Reese Witherspoon

Not only in Hollywood, but in life. So often, women in movies get portrayed as the damsels in distress, but what about confidence? What about a story about a woman who has it all, and nobody asks her how?

5. “I may sound like a megalomaniac, but I feel like I’m equipped to become a great, memorable comedian, if I keep working my ass off and staying at the pace I’m at, and I feel a responsibility to do that because of the women who have done it before me, and the ones who need to do it after me.” —Amy Schumer

Yasss queen! Truer words have never been spoken. We need more films that focus on women kicking butt and showing that we, too, can climb the latter of success.

6. "I don't know what I would have done so many times in my life if I hadn't had my girlfriends." —Reese Witherspoon

This year is all about girl power and showing that women can make it as far as, if not farther than, any man. But, if we're honest, we have to admit that we still need a girls' night out every now and than. It's the sisterhoods, the squads, the tribes, whatever you call your group, that really gets us through to the finish line.

This can apply to all women across the nation. We are fearless, and, once every woman realizes that, we will be a force to be reckoned with.

It doesn't matter what project they work on; I will be the first in line for this film. Regardless of the content, it is sure to be a film that celebrates powerful independent women, and that revels in the beauty of messiness, confidence, and feminist power.