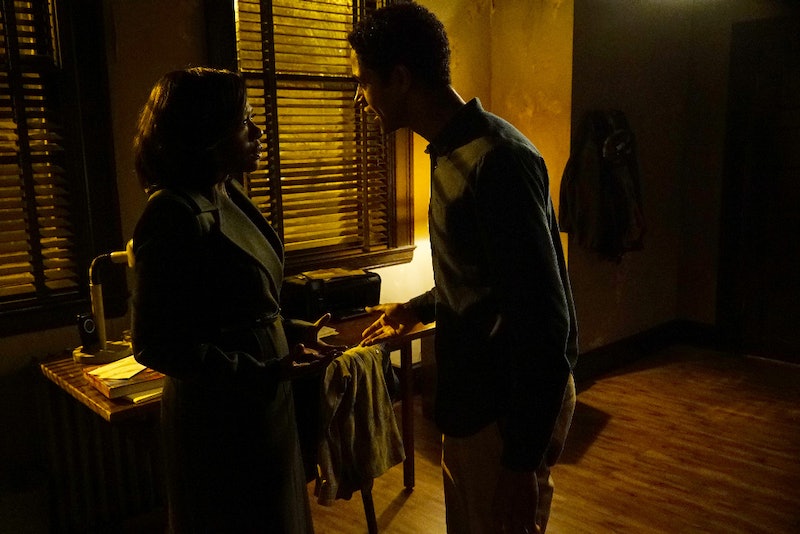 I know that there are multiple mysteries surrounding the big foggy mansion on How To Get Away With Murder, but there's another mystery on the ABC series that is quietly catching fire. Is Wes Gibbons secretly Annalise Keating's son on How To Get Away With Murder ? Their relationship has been painted from destiny from the very start, and there is a HTGAWM episode with a Wes flashback coming up soon. At the end of last Thursday's episode, while having celebratory drinks with her ex-girlfriend Eve, the professor referred to her student as "not just some student, it's him" in a foreboding voice. This revelation seemed to make Eve think that Annalise was a good person, so what does it mean?

Personally, I refuse to believe that Wes is Annalise's secret child that she hid away in Haiti. I know that happens all the time on Grey's Anatomy, but it seems like too simple of an answer on a show that thirsts for misdirection. True, Wes doesn't always seem bright enough to have made it this far in law school. True, Asher speculated that Wes was Annalise's secret baby way back in Season 1 and got shot dow with laughter, which would be the perfect way to cover up foreshadowing. Still, I am wary to believe that Annalise's connection to Wes is that cut and dry. There are plenty of ways for Annalise to be connected to Wes, and know that his mother killed herself, that are even more twisted than him being her child.

A Mother Hen, Annalise Is Not

Annalise Keating always looks out for the underdogs. Her team is made up almost exclusively of them, with the exception of Asher — who was probably put on the team because of his father and the way his personality catches people off-guard. Annalise probably would have gone to bat for Connor and Michaela as well, and as she said last week, she does not need to worry about Laurel. It's clear that something is different between her and Wes, but a "parental" nature is not the thing that sets her treatment of him apart.

If Looks Could Kill...

This theory definitely doesn't explain why she is so seductive towards him, like, all the time. I don't know how else to say this, but Annalise Keating is not that kind of a freak.

There Are So Many Other Options

What if Wes' mother is another ex-girlfriend? What if Annalise is, in some way, connected to Wes' father instead? We never met Sam's first wife. How messed up would it be if Wes killed his father without knowing it? How very Oedipus of How To Get Away With Murder.

We don't know much about Annalise Keating's family and upbringing, though what we do know is powerful. As an adult, she changed her name. Anna Mae was raised by her mother, Ophelia Harkness, and sexually abused by her uncle Clyde — who Ophelia burned down along with their house as soon as she found out. She also has an unspecified number of brothers and sisters. Perhaps one of those Harknesses are Wesley's parent. With a show like this, there have got to be at least three twists. "Bet you the boyfriend did it" was not 100 percent true, so I don't think "juries love a secret baby" will be prophetic, either. How To Get Away With Murder may want us to think that Wes is Annalise's son, but it's guaranteed to be more complicated than that before the season is over.