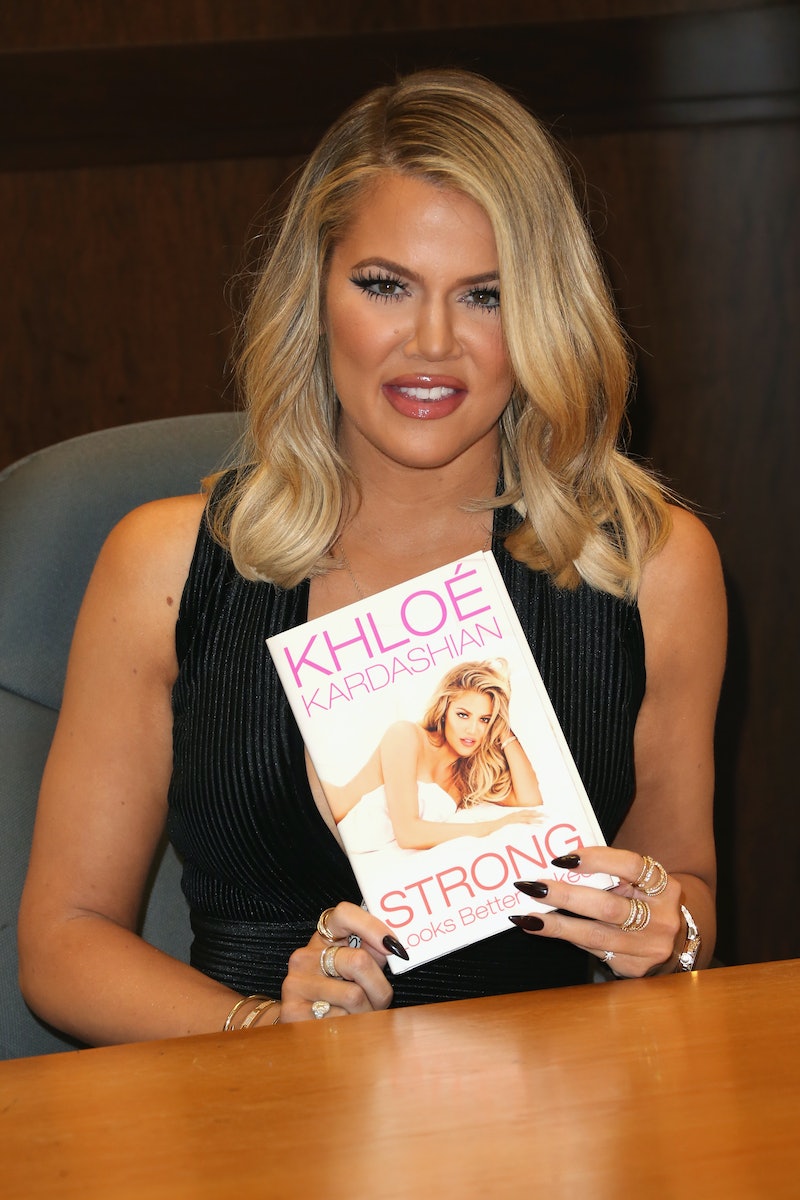 Although I know confidence is an issue for a lot of women, I never expected to hear that complaint from reality star Khloé Kardashian (maybe you've heard of her?). Considering she comes from a family best known for its beautiful daughters, grandiose lifestyle, and frequent tabloid fame, I assumed she had the confidence thing down. In her new book Strong Looks Better Naked , however, Khloé opens up about her body issues, insecurities, and how she learned to find peace amid her crazy lifestyle.

Although I typically think of myself as a fairly confident human being (I routinely look into my mirror in the morning and whisper, "You are a magnificent goddess" before starting my day), I definitely have times when I don't feel as fantastic about myself as I'd like to. Maybe I'm not happy about the way my hair looks, or I feel like all of my friends are doing cooler things than I am, or I'm beating myself up over a mistake I made last week — no matter how hard I try, there will always be times when I'm just not that happy with myself and wish I could be a little better or stronger, even if I try to hide it from everyone else.

While I do have issues with parts of her book (we all should be less interested in how much time you spend at the gym or what diet you're on than we are in how awesome you feel in your body), even I can't deny that the woman has worked hard to get to a place where she feels more strong and confident in her own skin. Maybe we can learn a lesson or two from Khloé.

1. If You're Not Happy, Find An Outlet For Your Negative Emotions

While still in a relationship with her estranged husband, Lamar Odom, Khloé found herself living in Dallas — far away from the Karshashian clan and friends for the first time. As anyone who's gone away to college or moved away from home knows, there are times when homesickness can be painful and even debilitating. When Khloé began to feel depressed and isolated (because even stars can miss their families so much it hurts), rather than wallowing she began exercising. She picked an activity that distracted her from her negative feelings and left her feeling in control and more capable of handling her problems.

Exercising may not bring you to your happy place, but finding an activity like painting or baking that relieves your stress and helps you feel confident is the first step toward making yourself happy again.

2. There Are No Easy Fixes

It's refreshing to have a celebrity tell you she didn't wake up like this. Instead she says she had to work her butt off to get what she wanted. In Khloé's case, what she wanted was to get into killer shape. The unfair fact of life, however, is that one workout isn't going to give you the body of your dreams. (I did one 30 second plank today and I see no difference in my abs, sadface.) Khloé talks about how she's tried various cleanses and diets supposedly designed to make you lose weight fast, only to find that the only real way to achieve her goal was to actually work for it the old-fashioned way: by training multiple times a week and changing her diet.

Maybe your goal is to land a new job or get great at knitting. Either way, you're not going to wake up one morning as a CEO or wearing an expertly-knitted sweater. You're going to have to spend a lot of time and energy working toward your dream, and it may be a pretty slow road, but it's worth it.

3. When Things Get Rough, Face Your Problems Head-On

Khloé reveals that after her father passed away, she began pulling away from her family and partying too much. She couldn't deal with the pain of losing her dad, and rather than face this pain, she let her life spin out of control. It wasn't until her oldest sister Kourtney gave her some tough love and a job at Dash that Khloé was able to deal with her sorrow and find a reason to wake up each day.

When life starts getting hard, it's tempting to isolate yourself from the world or pick up bad habits to dull your pain. You may be able to run from your problems for awhile, but eventually you have to woman up and face your issues head on. It may be easier to avoid your problems than to deal with them, but you can't begin to heal until you admit that you have a problem.

4. Forgive Yourself From Past Mistakes, And Learn From Them

To all of my over-thinkers and perfectionists out there, I'm sure you can relate to this. I routinely find myself obsessing over a mistake I made days or even weeks ago. Now, imagine having to watch all of your mistakes on TV every week. For Khloé, every bad day or ill-timed outburst is splashed across TV screens and magazines. Rather than get sucked into a vortex of self-hate, though, she tries to learn from her mistakes.

She mentions an argument she had with her mother, Kris, over a radio interview that went poorly. Rather than be mad at the radio host, she lashed out at Kris and was later horrified by her reaction. So, Khloé admitted that she was wrong and asked for her mother's forgiveness.

As I said earlier, I may not agree with Khloé on everything she writes, but I will give her credit for this: Being forced to constantly witness your worst moments, learning to apologize to those you've wronged, and forgiving yourself takes a lot of guts.

As I was reading about Khloé's growing focus on fitness, I began to get a little bit nervous. Was she going to start spouting about absurd calorie restrictions and an aversion to all things chocolate? Instead, she actually gives some pretty good advice: Set a reasonable, realistic goal and don't be afraid to treat yourself now and then.

If you set your sights too high in the beginning (remember my example of the amateur knitter who wanted to make a sweater?) you're going to get discouraged and give up. But if you actually think about what you could accomplish in a realistic time span, you're way more likely to stick to your plan and achieve your goals. And no matter what your eventual goal is, it's OK to treat yourself once in awhile. Eat a pint of ice cream if you're on a fitness kick, or watch a movie instead of slogging through Ulysses for a night. You work hard, and you deserve a break. That advice is Kardashian-approved.