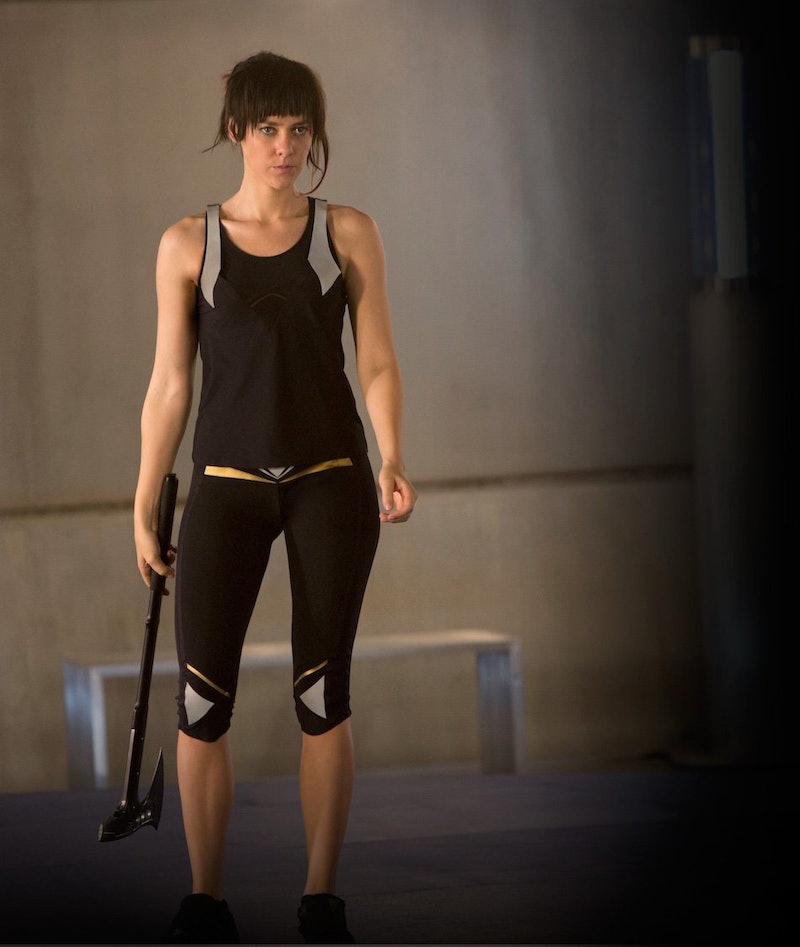 If you were expecting Mockingjay, Part 2 to be just like the previous films in The Hunger Games series, think again — unlike its predecessors, the final movie in the franchise is no games, and all business. "It's a whole other world," Mockingjay star Jena Malone tells Bustle. "Finally, Panem is at war— real war, not computer animated war. This is real."

Well, as real as The Hunger Games can get. Part two of the series' final chapter finds the Districts pitted against President Snow's corrupt Capitol government in an epic showdown, with Katniss, the Girl on Fire, front and center. Several other figures stand alongside her in the rebellion, one of the most important being Malone's character, District 7 former victor Johanna Mason. According to the actress, the upcoming film (out Nov. 20) takes everything readers know and love — her character, Katniss, the Games themselves — and puts a new spin on them all.

"I feel like the whole story just kind of turns on its head," Malone says. "It’s a really exciting thing to see. After three films of kind of waiting for [the uprising] to happen, it finally happens, and in a really satisfying way."

It's certainly taken long enough; the wait for Mockingjay, Part 2 has seemed worse than for any of the other movies, due to the fact that Part 1 ended abruptly in the middle of the third book's story. The choice to split Collins' massive work into two films made sense ("Mockingjay is such a dense novel... there’s so much going on," says Malone) but still, fans are understandably anxious for the newest movie's arrival.

Yet splitting Mockingjay up was clearly a good call, as adapting the novel into two parts allowed filmmakers to include much more of the book's beloved scenes and action sequences than they would have been able to in a single film. Yet like any page-to-screen adaptation, both parts of Mockingjay required a few adjustments. But what, exactly, does Mockingjay, Part 2 change from the book?

"A few things, but it's very slight," Malone says. "Naturally you kind of have to allow certain things to fall to the wayside, or three things become one thing. But I always really trusted [director] Francis Lawrence's vision. I thought the way he adapted [the book] into two films was a really beautiful idea, and I think people will be really pleased.”

One choice that Malone says she is particularly proud of is that the film can be appreciated regardless of whether viewers have seen its predecessor. "With any series, of course it's richer, fuller to watch them in sequence," she says. "But I think [Part 2] stands alone. We kind of allowed [both Mockingjay movies] to become their own films in a way, and not just pieces of each other — which I think is a really important thing as an a audience member. Particularly those that aren’t familiar with the books; you kind of want them to feel like they’re discovering something really special, and it’s not just half of a film."

And, she adds, "Mockingjay, Part 2 is only entitled Part 2 because it was deciphered from the same book. If they allowed themselves more leeway, I think it would’ve been titled a completely different thing."

No matter the name, one thing is clear: this final installment is, at least according to its star, one of the series' best. Says Malone, "I went through a wild ride of emotions when I saw it, clapping and cheering and crying. It's really great... particularly because this is the last piece, it’s pretty incredible."

Speaking of the series' finality, what is Johanna's fate at the end of the series? Her story isn't neatly wrapped up in the conclusion of Collins' novel, so it can be presumed that the movie doesn't give her a clear ending, either. Malone doesn't mind, though. "I kind of love when characters don't have wrap ups in books," she says. "I feel like so often books love to wrap up every character, and I like that Suzanne [Collins] really allows the audience to kind of allow whatever they want to happen to her."

However, Malone has her own idea about her character's fate. Says the actress, "I think once the film comes out, I’ll tell my theory of what happens to Johanna." So in case you weren't already antsy for the release of Mockingjay, Part 2, now you have one more reason to anxiously count down the days on your calendar.