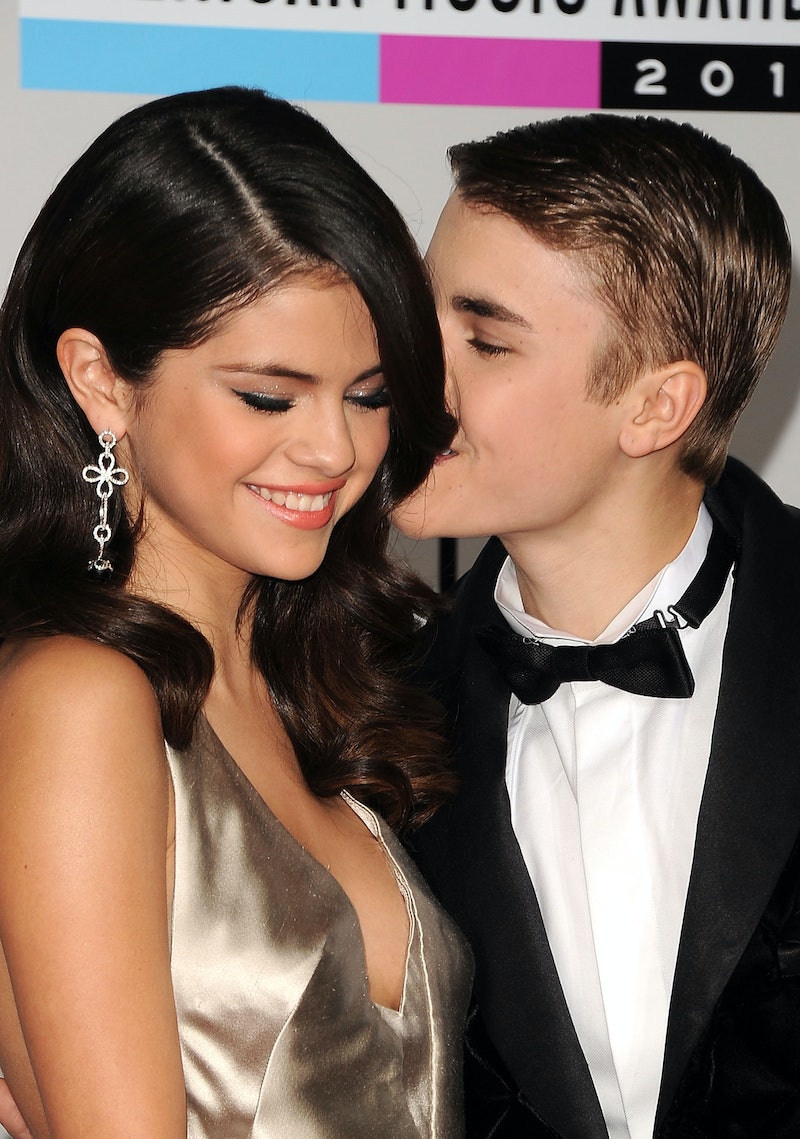 The moment has arrived, and Spotify is certainly getting a workout, as One Direction's Made In The A.M. and Justin Bieber's Purpose both drop on the same day. While those outside of the boy band fandom might be waiting to see which of the two pop titans come out on top, I've just been waiting to hearing Justin Bieber's "Mark My Words" at last. By the singer's own admission on The Ellen DeGeneres Show, "Mark My Words" is about Selena Gomez, along with "What Do You Mean?" and, in part, "Sorry." The latter two songs were released ahead of the album, and have been analyzed to death, but do the "Mark My Words" lyrics describe Gomez, or did Bieber get all vague on us to the point that we wouldn't know this song was about Gomez if we hadn't actually told us?

As I predicted, Purpose is the best album that Bieber has ever done. Leave it to the 21-year-old to take raw emotional pain and set it to dance beats that make you want to get up and bust a move before you realize that he's singing about things like tarnishing his own famous reputation ("Sorry"), losing people that he cared about ("Where Are U Now"), or learning to get rid of poisonous friends ("Love Yourself"). But "Mark My Words" in particular had a title that sounded incredibly ominous, until you listen to the actual lyrics of the song and realize that it's actually really sweet. The song, relatively short in comparison to others on the album, opens with an electronic beat, as Bieber sings:

So, by "mark my words," he was actually promising Gomez that he'd give her everything and that he wouldn't lie to her, or to the world because of her. As if we needed any further reasons to believe the pair had an incredibly intense relationship during the years they were on and off, this verse really drives it home that Gomez means a lot to Bieber. Especially if he freely admitted to DeGeneres that this one went out to her.

There is so much here that I don't even know where to begin. Gomez and Bieber's relationship was so on-and-off that the world began to roll its collective eyes whenever a news report came out that the pair were together, or apart, or were photographed together, or were photographed with other people. From Gomez's "The Heart Wants What It Wants," it was clear that she knew she had been stuck in a sad cycle she couldn't break out of — and this verse seems to reply that, yes, Bieber is aware that he was the one in the wrong while she was giving their relationship everything he had, and, yes, he's sorry about it.

However, this is where the song goes from being heartbreakingly romantic to having a positive, and platonic, bent. Because Bieber doesn't want to lose Gomez, but that doesn't necessarily mean as a girlfriend. As he said on Ellen, "I think we're both just on our own journeys, figuring ourselves out, and once we've figured ourselves out we could maybe come together and make an awesome duo. Or she'll find someone awesome and I'll find someone awesome. I just want her to be happy, honestly." That seems, to me, to be more the message of this song more so than Bieber wanting her back. He wants her to be happy, and he wants to be a part of her life in some way. And that's actually really beautiful.

The song then returns to the chorus before ending, but, by this stage, Bieber has made his point. If you weren't a fan of Jelena when they were on, then you might just be a fan of them now. As friends, as lovers, as whatever the pair of them grow into, there is a lot of history and a lot of emotions here between the two of them. And we're all getting some damn good songs out of it.