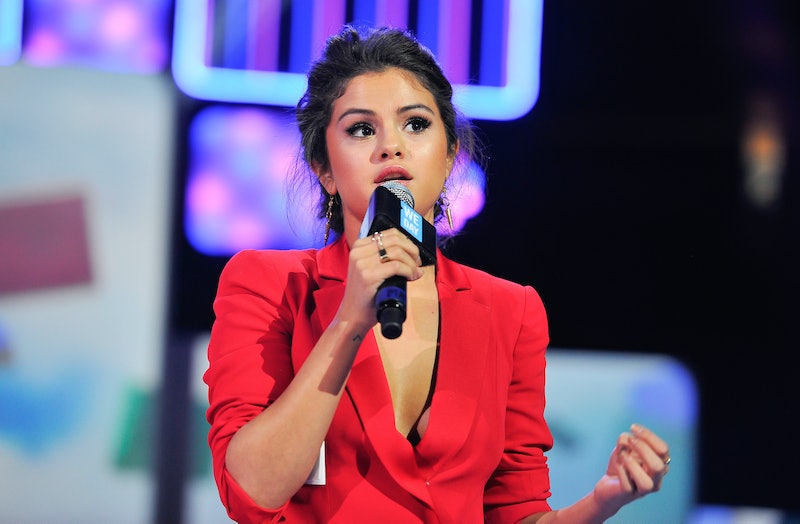 When Selena Gomez's new music video debuted on Thursday, the Internet practically exploded. By exploded, I really mean it erupted with sadness and applause. In the black-and-white "The Heart Wants What It Wants" video, Gomez opens up about a painful past relationship that she just couldn't get over, despite knowing it was unhealthy. Without jumping to conclusions, the seemingly obvious guess is that it's about Justin Bieber. But either way, figuring out who the song is about isn't what's important here. The video seems to tell a greater story about an emotionally abusive relationship. Way more than just a sad music video, it should be recognized as the important narrative that it is.

I didn't realize the song's depth until seeing Sarah Hyland tweet her support of Gomez's new song. The Modern Family star shared the video and called it "Brilliant. Important." Hyland's words stood out, since in September news broke that Hyland's long-term relationship with Matthew Prokop was an abusive one. She luckily recently received a restraining order against him. I guess it took Hyland calling Gomez's song "brilliant" for it to click in my head and make me recognize why it really is such an important video.

Of course, I can't say for sure that Hyland was even referring to her personal experience — she simply could've just liked the song. Still, her comment highlights the video's validity and why Gomez is so strong for opening up. It's incredibly courageous for her to be so vulnerable, especially to such a huge audience — aka her millions of fans and basically the whole world.

In a way, "The Heart Wants What It Wants" reminds me of the #WhyIStayed campaign. Just like that hashtag, Selena Gomez's song proves that sometimes women can't leave harmful relationships as easily as you may think. It's really impossible to get inside someone's head and know what's truly going on. As cliché as the saying may sound, you really can't judge a person until you're in their shoes. I think that's part of the overarching theme of this song — Gomez is finally sharing her side and speaking out about why she stayed in a situation, even if she knew it wasn't the healthiest.

To show how Gomez's "The Heart Wants What It Wants" video fits this analysis, let's re-watch the video (as if you haven't been hitting replay all day anyway):

In the beginning monologue, Gomez narrates with a teary, broken voice, saying:

I know him and I know his heart. And I know what he wouldn't do to hurt me. But I didn't realize that I'm feeling so confident and so great and then it just be completely shattered by one thing. By something so stupid. But then you make me feel crazy, like it's my fault. I was in pain.

This voiceover proves the complicated, dangerous aspects of whatever relationship she's referring to. It may seem like harsh wording to call the Bieber on-again/off-again relationship abusive (maybe it wasn't), but from an outside perspective, it certainly hasn't seemed healthy. Especially since Gomez spent voluntary time in rehab in January, believed to be for emotional reasons. This theme is reflected in these lyrics: "Save your advice 'cause I won't hear / You might be right, but I don't care / There's a million reasons I should give you up / But the heart wants what it wants."

While I certainly can't speak for Gomez or her intentions, I do believe she's conveying important insight into abusive relationships (emotional or otherwise). Through her lyrics, she's essentially saying that despite knowing it was wrong, she still stayed in that relationship because her heart was convinced that he loved her back. It's like we finally have an answer as to why she kept going back to Bieber. It's not that she owed anyone an explanation, but it's very brave of her to share. Hopefully this helps others realize they're not alone and most importantly, recognize when it's worth ending a relationship. Bravo, Selena!

More like this
Selena Gomez Explained Why A Past Album Cover Made Her Feel “Really Ashamed”
By Grace Wehniainen
Britney Has Been Granted A Restraining Order Against Her Ex-Husband
By Bustle Staff
Who Is Betty Who Dating? The Australian Singer Is Married To Her Tour Photographer
By Radhika Menon
Photos Of The 'Elvis' Cast vs. Their IRL Counterparts Will Have You All Shook Up
By Grace Wehniainen
Get Even More From Bustle — Sign Up For The Newsletter