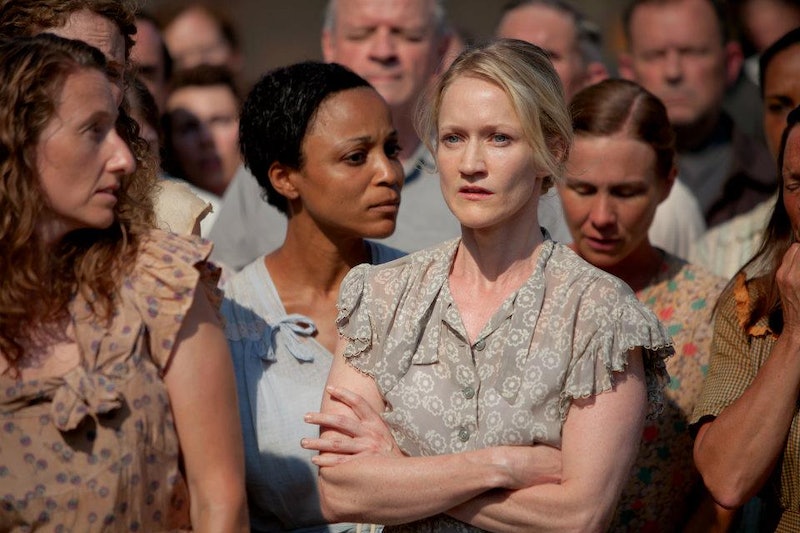 Family and protecting the ones you love are both major motivators and themes throughout the story of The Hunger Games. After all, Katniss' incredible journey from Tribute to Mockingjay was all triggered from the love she had for her younger sister, Primrose Everdeen, and her desire to protect her from the cruelty of the Games by taking her place as the female tribute from District 12. But it's easy to forget that there is more to Katniss' family than just her sister. Our hero's father died in a mine explosion when she was just 11 years old, leaving only Katniss, Prim, and her mother, Mrs. Everdeen, to take care themselves. As a mother figure, it's expected that Mrs. Everdeen would care for her children after her husband's death, but it didn't quite work out that way; what happens to Katniss' mom in Mockingjay is a story unlike anything you'd expect.

First, some background: as a widow, Mrs. Everdeen became depressed to the point that she was unable to do much of anything for her children. She stayed at home and did not work, which forced Katniss to become the adult in their household, fending for both herself and Prim. And as we know from Peeta giving burnt bread to Katniss, the Everdeens were starving and in poverty. This part of their lives proves to be a source of anger and pain for Katniss that becomes evident throughout the series.

But does Mrs. Everdeen ever get better by the end of Mockingjay? How does her ending pan out? (Spoilers ahead!) After the events of Catching Fire, Mrs. Everdeen and Prim move to District 13, where Mrs. Everdeen utilizes her talents as a healer to nurse the sick and wounded alongside Prim. Ironically, it's the toll of the Second Rebellion and camaraderie of opposing the Capitol that glues the previously broken Everdeen family together. Mrs. Everdeen is even given a second chance at doing what she was unable to do during her depression — take care of her children. Mrs. Everdeen is the one to nurse Katniss back to full health in the aftermath of an attack from the Capitol. While that alone doesn't erase her neglect in the past, it does provide something of a full circle for the family, the members of probably would have never became close if it weren't for Katniss' initial involvement in the Hunger Games.

However, just like how war unites Mrs. Everdeen with Katniss, so does absolute tragedy. Prim ultimately dies from a hovercraft attack, bringing much grief not only to Katniss, but to Mrs. Everdeen as well. The death of her youngest child affects her so much that she ultimately leaves District 12 and its memories of Prim, settling down roots in District 4 and choosing to spearhead a new hospital there instead. And while she doesn't live with Katniss, we do know Mrs. Everdeen does stay in touch with her through the phone — Haymitch provides a note with a number for Katniss to contact her mother with.

Mrs. Everdeen's ending is bittersweet. Although she was able to forge a better relationship with Katniss, she is struck by the pain of losing a loved one yet again. The only difference the second time around is that Mrs. Everdeen appears to not let the pain of losing Prim render her unable to act entirely. She evolves as a character and instead dedicates herself to using her talents for good. I'd like to think she spends the rest of her days doing her best to make sure that no other wife or mother ever has to endure the unspeakable pain losing a husband or child — and that's more than a decent enough ending for me.