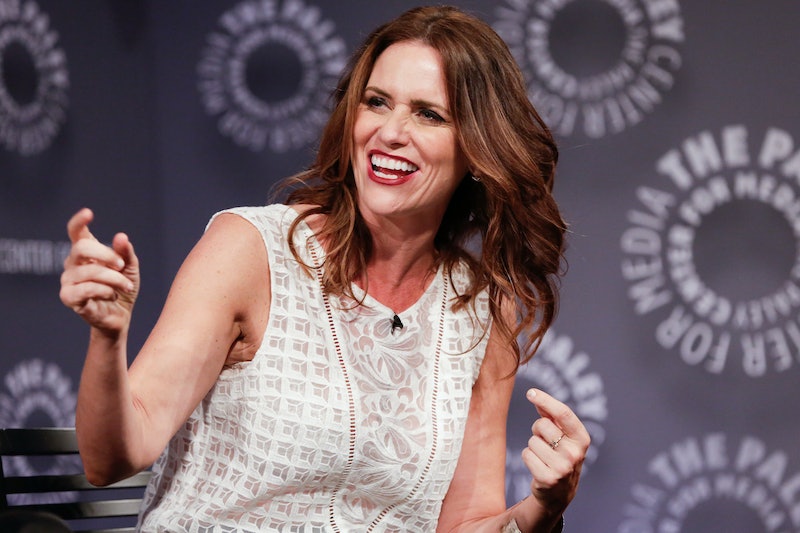 Filming may already be underway for Doctor Strange , the second film in Phase 3 of the Marvel Cinematic Universe (following next May's Captain America: Civil War), but the ranks of its supremely talented cast are still swelling. This Thursday, The Wrap revealed that Amy Landecker is joining Doctor Strange opposite Benedict Cumberbatch as the titular superhero, and ,with the casting of the Transparent star, it's pretty clear that this movie is shaping up to be a doozy. (Get it? That was a pun.)

Aside from her role in the Golden Globe-winning Transparent , Landecker is also known for her recurring roles on shows like Revenge and Louie, and for supporting parts in indie dramedies like 2007's Dan In Real Life and 2013's Enough Said. Landecker also appeared in 2009 Best Picture-nominated Coen Bros. movie A Serious Man, starring her future Doctor Strange cast mate Stuhlbarg.

Like McAdams and Mikkelsen, Marvel Studios have not yet deigned to divulge which character Landecker will be portraying in Doctor Strange. But that won't stop me from hypothesizing, will it? Of course, it's possible that she'll be playing an original creation, or a character from the comics so minor or obscure that we'd never guess it. (Remember when news broke that Linda Cardellini and Julie Delpy had been cast in mystery roles in Avengers: Age Of Ultron, and everyone was theorizing that they would play major parts like Carol Danvers or Janet Van Dyne — and then it turned out Cardellini was just Hawkeye's wife and Delpy just appeared in a flashback cameo?)

But, for the sake of fun, let's assume Landecker has been cast in a major, recognizable role. Could she be playing Clea, the sorcerer sister of villain Dormammu and love interest of Doctor Strange? That blonde witch seems like a role more suited for McAdams than Landecker, honestly. But the Transparent star could easily be playing another woman in Strange's life, Victoria Bentley. Stephen met Victoria when he was investigating the murder of her father, a magician named Clive; he saved her after Baron Mordo targeted her for death as well. Although they never became romantically involved, Victoria remained an important figure in Stephen's story from then on.

It would also be fun if Landecker went a more villainous route, perhaps portraying dark sorceress and frequent Doctor Strange antagonist Morgan Le Fey. Based on the figure from Arthurian legend, Morgan was a significant ally to Doctor Doom — a character owned by 20th Century Fox as part of the Fantastic Four franchise. Although that supervillain can't appear in the MCU due to rights issues, it would be a simple matter to rewrite Morgan's story to align her with Baron Mordo instead.

It's hard to predict who Landecker will be playing, since director Scott Derrickson has been so eclectic with his casting thus far. Hiring British-Nigerian Ejiofor to play a Transylvanian nobleman and Swinton to play an old Tibetan man just goes to show that the director isn't afraid to cast against expectations. Like Swinton, Landecker could easily be playing a character originally written as a man in the comics, or someone equally unexpected. We likely won't know the answer until Marvel officially confirms who the actress is playing — or until the trailer debuts, whichever comes first.