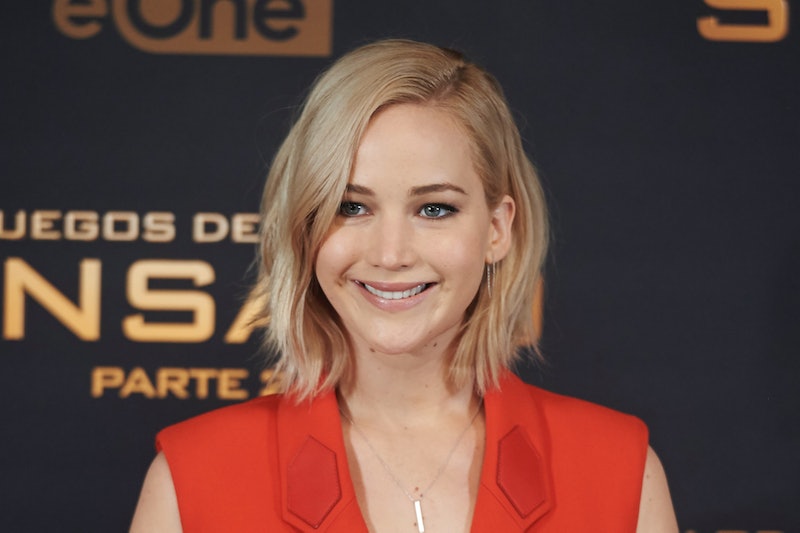 One day, if all the famous people are nowhere to be found, it'll probably be because they're chilling with J. Law. She seriously has so many celebrity friends. Plus, who wouldn't want to hang with her rather than get stalked by the paparazzi? Did you know that Jennifer Lawrence is friends with Mila Kunis and Ashton Kutcher? Just add them to the already long list of besties the actress has. Lawrence opened up about her friendship with the couple while chatting with Vogue as the magazine's December cover star. After being asked what she does during her time off, Lawrence answered,

You’re looking at it. Hang out. Drink wine. I’ve got a bunch of friends who live really close, thank God. And I’ve made friends with Mila and Ashton, two doors down. They’re awesome. I go over there uninvited. They’re probably getting pretty sick of me.

First, I can totally see her just walking over to their place, busting down the door, and being like, "I'm here!" Best. Neighbor. Ever. Second, can you imagine what it's like when these three chill? Do they watch reruns of That '70s Show? Does The Hunger Games star play with their daughter Wyatt? Whatever they do, I'm sure it's amazing. I mean, they could just sit there and watch paint dry, and I'd still be intrigued by their friendship.

Who isn't the Oscar-winning actress friends with? If you thought Ellen DeGeneres was friends with every celebrity in Hollywood, Lawrence is giving her a run for her money. Just check out some of the many celebs who are part of her posse.

From jet skiing to singing with Billy Joel to writing a screenplay together, these two are ultimate #FriendshipGoals.

Seeing as they've starred in a million movies together (more like four), they were bound to become friends.

Ever since they started starring as love interests in The Hunger Games together, Hutcherson and Lawrence have been inseparable. When you film a franchise together, how can you not become super close?

Like Hutcherson, J. Law is also tight with Hemsworth, her other co-star from The Hunger Games. As she told Nylon magazine, "I guess the thing that surprised me is that I would never expect to ever have a man this good-looking ever be my best friend." She added, "I just would never assume those things could happen, but he is. He's the most wonderful, lovable, family-oriented, sweet, hilarious, amazing guy."

To be clear, I don't think these two are besties, but I'm sure they're pretty close thanks to Jenner surprising J. Law for her birthday. Best birthday surprise ever? At least for Lawrence it was.

Finally, if this piggyback ride doesn't say BFFs, I don't know what does. Who wouldn't want to be friends with both Ansari and Lawrence?

Now if I could only score an invite to hang with J. Law and all of her friends...

More like this
Ashton Kutcher Opens Up About His Battle With Rare Autoimmune Disorder
By Radhika Menon
Jennifer Aniston Picked The Best ‘Friends’ Moment To Mark Lisa Kudrow’s Birthday
By Stephanie Topacio Long
Lisa Kudrow Explained How Her Body Image Changed While Filming 'Friends'
By Grace Wehniainen
Who Is Camila Cabello Dating? She's Getting Cozy With Lox Club CEO Austin Kevitch
By Radhika Menon
Get Even More From Bustle — Sign Up For The Newsletter