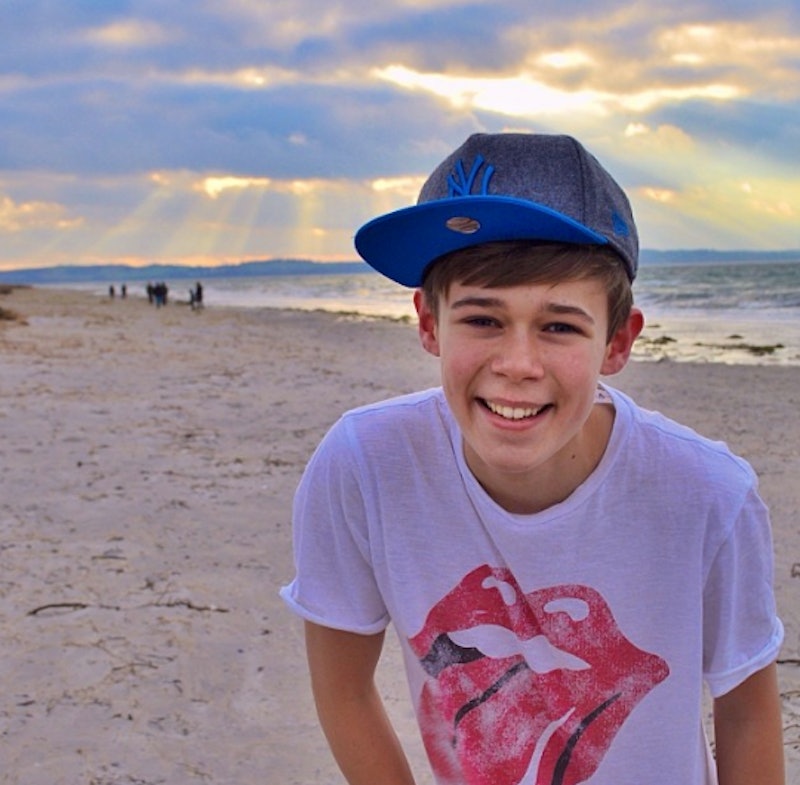 Do you miss the old days when Justin Bieber was an innocent, "Baby"-singing 16-year-old, instead of an arrogant, upsettingly rich, immature 19-year-old? You may not be able to go back to those days, but you can start over with someone new, Benjamin Lasnier. The Danish 15-year-old got his start by posting selfies on Instagram and has since accumulated a ton of fans on Facebook, Twitter and YouTube, where he posts videos of himself singing — sound familiar?

The Biebs himself was discovered on YouTube, and though Benjamin first gained popularity on Instagram, he's certainly attracting the same demographic with daily selfies of his precisely messy hair, blue eyes and apparently endless hat collection. Benjamin, who's now trying to turn his Instafame into a music career, even has a name for his fans, Benzilers, who seem to have a good amount of overlap with Beliebers and Directioners.

Benzilers come from all over the world and make up Benjamin's 48,000 YouTube subscribers, 225,000 Twitter followers, 1.1 million Instagram followers and, get ready, 3.7 million Facebook fans. On all of these social media platforms, Benjamin frequently interacts with his fans, and posts things that get them really excited. It's a reciprocal relationship that's obviously working for him, as Benjamin got a record deal with Sony Music's Denmark division in March of 2013, when he had just cracked 760,000 Instagram followers.

The word most frequently used by Benjamin seems to be love, as he tweets thankful messages to his fans and captions Instagram photos in a way that probably makes each of his fans feel like he's directly speaking to them. When he responds directly to fans on Twitter (which happens frequently, especially when you consider the size of his following), messages frequently end in his hearts, and he likes to RT fans own positive words.

Considering just how popular a forum YouTube has become for aspiring singers, something must've made Benjamin stand out from the sea of hopefuls — besides his actually scary resemblance to Bieber.

See what I mean? No, I think it might be that personal fan interaction, the messages and appreciation that can turn casual fans into Benzilers and make Benzilers dedicate their lives, and Twitter profiles, to Benjamin. Many of his most outspoken fans use their Twitter bios to keep track of every online interaction they've had with the singer, because who wouldn't want to ensure that they, and their friends, never forget the time their favorite celebrity noticed them?

And, while Benjamin's most popular YouTube video is a short cover of "My Best Friend's Girl," his second most watched video is a 13-second introduction to his channel, below.

Benjamin's YouTube channel is made up of both kinds of videos, his song covers and personal messages to fans, with a few behind-the-scenes looks at him in the studio. His Facebook and Instagram pages are mostly selfies with messages to fans, and while the average Instagram picture gets between 50 and 60 thousand likes, his Facebook photos are insanely popular. Take the one below.

That might not even be the real Benjamin, but it easily could be, because he knows how to engage them. Without the help of a reality competition or bizarrely named manager, Benjamin has amassed a following that, with some time and promotion, could grow to rival Beliebers and Directioners.

Not bad for a kid who started with a selfie.