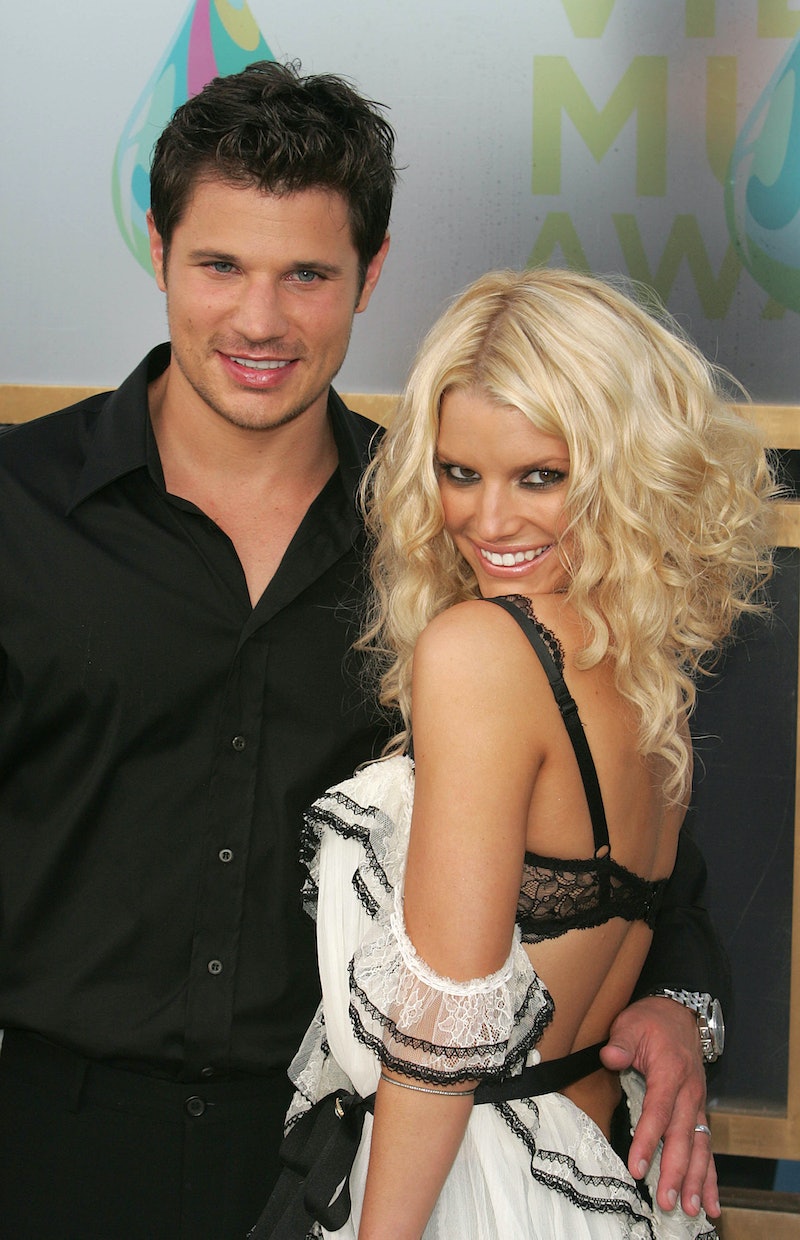 Remember the good old days? I'm talking about when Jessica Simpson and Nick Lachey reigned as one of the best couples in pop music. Back in the early 2000s, this pair was married and gave us one of the greatest reality shows in MTV history. Bold statement, I know. But Newlyweds: Nick and Jes sica was such a fantastic show. Seriously, who didn't go around jokingly asking, "Is this chicken or is this fish?" anytime they ate tuna? I was devastated when these two called it quits. They were like the Cinderella and Prince Charming of our generation, so I expected them to live happily ever after.

OK, so I know they both have clearly moved on since then. Back in 2014, Simpson married Eric Johnson and has had two super-cute kids. Meanwhile, Lachey tied the knot to Vanessa Minnillo and they have two babies, as well. So all in all, things turned out pretty great.

Of course, I'm glad they found happiness with other people. But for the sake of imagination, let's pretend time travel existed and by some twist of fate, these two never broke up. What would the world be like if Simpson and Lachey were still together in 2015? I've decided to ponder that very scenario. Here's what life would be like if this couple didn't split up.

Newlyweds Would Have A Much-Needed Spin-Off

Since the show aired in 2005, it would be the perfect time for a spin-off showing where the couple is 10 years later.

There Would Be Plenty More Great Jessica Quotes

If MTV did give us a 10-year anniversary edition of Newlyweds, we would get a ton more Jessica-isms to use in everyday conversation. Ideally ones related to food.

Since he wouldn't have experienced the post-Jessica heartbreak, his entire What's Left of Me album would have never existed. His solo career would've probably featured much happier tracks.

They Would've Made More Music Together

Can you imagine how many lovely ballads these two could've recorded together? "Where You Are" would've been just the beginning of many sweet collaborations.

There Wouldn't Be Such Animosity Between Them

In an interview, Simpson said her biggest financial mistake was her first marriage. Yikes! Meanwhile, Lachey said not having kids with Simpson was "the best thing that could have ever happened." Not exactly the nicest thing to say about your former spouse.

Eric Johnson Would Be Just Another Football Player

Sure, sports fans knew who he was way before he began dating Simpson in 2010. But for me and fellow pop culture aficionados, this former 49ers player was previously unknown.

'00s Nostalgia Would Live On Forever

Seriously, what would better symbolize the greatness of the early 2000s than these two still being together?

Well, that was fun! Since there won't actually be a Jessica and Nick reunion, I guess I'll have to live vicariously through reruns of Newlyweds. It's almost as good... Almost.