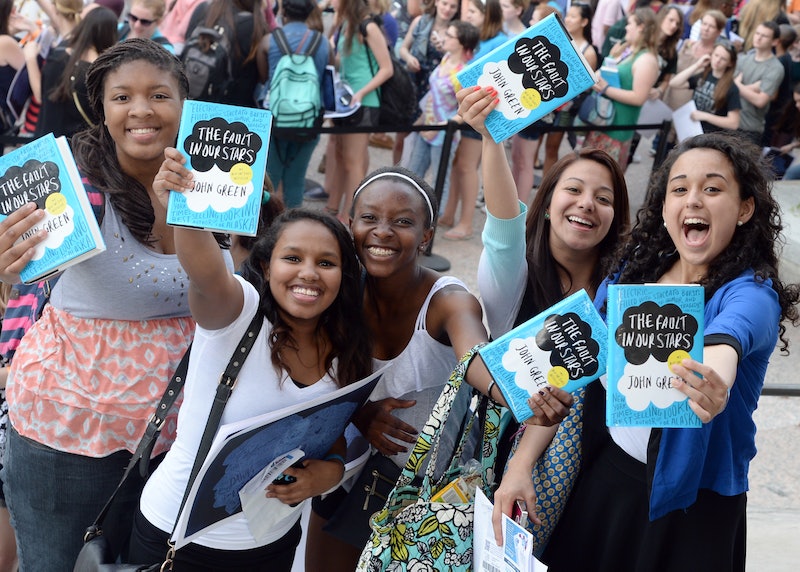 In today's modern culture where attention spans are short and pop culture is always looking for what's coming next, the lasting impact of a quiet novel is almost unheard of. John Green's modern classic — I think we can say it's earned that moniker now — The Fault in Our Stars proves us wrong. Today is the second anniversary of the YA novel about teenage cancer patients, and its effects are still reverberating through publishing and readers of all age groups.

The novel, for those who haven't yet had the opportunity to read it (and if not, please do now), centers on Hazel, a terminal cancer patient whose recent surgery has added some time to her life. But in her Cancer Kid Support Group she meets Augusts Waters, a gorgeous guy in remission from osteosarcoma, which took one of his legs. Hazel and Gus go from flirty acquaintances to lifelong — however long their lives may be — confidants and partners as they fall in love. Don't call this just another "cancer book," though, because as Hazel says, "cancer books suck."

On his Tumblr, John Green shares memories of first writing and sharing his beloved novel:

The first teenager to read TFIOS was my now-assistant Rosianna. We were at Vidcon and Rosianna’s dad had died unexpectedly that day, and she couldn’t get home to the UK to be with her family. That night, we were talking about Esther and about the book and I offered to let her read it. She read it overnight and the next morning when she returned the manuscript to me, she said, 'It’s definitely the best book you’ve written,' and I really clung to that in the intervening months as I worried that I might disappoint all the people who’d preordered it.

History has shown that Green certainly didn't have to worry about disappointing any readers. When it was first published, The Fault in Our Stars received a starred review from Kirkus, Publishers Weekly, Booklist, and The Horn Book, and glowing reviews The New York Times, Time, USA Today, The Guardian, and countless other reviewers, magazines, and blogs. The Fault in Our Stars was named No. 1 in its list of Top 10 Fiction Books of 2012 — fiction, not YA fiction. In the review, Lev Grossman wrote:

The Fault in Our Stars is a love story, one of the most genuine and moving ones in recent American fiction, but it’s also an existential tragedy of tremendous intelligence and courage and sadness.

But perhaps even more importantly, and something Grossman touches on, is how the power of Green's novel has affected its readers since its publication. Gus and Hazel's story is poignant. Who hasn't been affected by tragedy or sickness in their lives? Even, sadly, who hasn't been affected by cancer? Green's sharply funny but heartbreaking approach to the story of two ordinary teenagers in extraordinary circumstances endures because of its ability to reach out and touch its readers.

In honor of the anniversary, Green started a hashtag on Twitter, #tfiosanniversary, which has been buzzing with activity all day. Many tweets are from readers — teenagers, adults, men, women, girls, boys — wishing Green a happy anniversary and thanking him for writing a story that moved them so honestly.

It's likely that the aftereffects of Green's novel won't die out anytime soon. This summer will see the movie adaptation of The Fault in Our Stars , starring Shailene Woodley as Hazel and Ansel Elgort as Gus. The movie has already had some controversy, as its poster contains the tagline, "One sick love story" which some thought was a glib representation of such an affecting story.

Green responded to the controversy on his Tumblr, stating that he did not write the offending tagline. But his response hits on why his novel is not just another entry into the saccharine "sick kid lit" and how it reaches so much higher, resonating with anyone who reads it.

I like the tag line. I found it dark and angry in the same way that Hazel is (at least at times) dark and angry in her humor. I mostly wanted something that said, 'This is hopefully not going to be a gauzy, sentimental love story that romanticizes illness and further spreads the lie that the only reason sick people exist is so that healthy people can learn lessons.' But that’s not a very good tag line. I like the tag line because it says, literally, the sick can also have love stories. Love and joy and romance are not just things reserved for the well.

In the book, Gus tells Hazel, “Oh, I wouldn't mind, Hazel Grace. It would be a privilege to have my heart broken by you.” Fittingly, because that's the way readers look to Green's novel itself. In these two years, it has been a privilege to read and re-read The Fault in Our Stars, only to break our hearts over and over again.