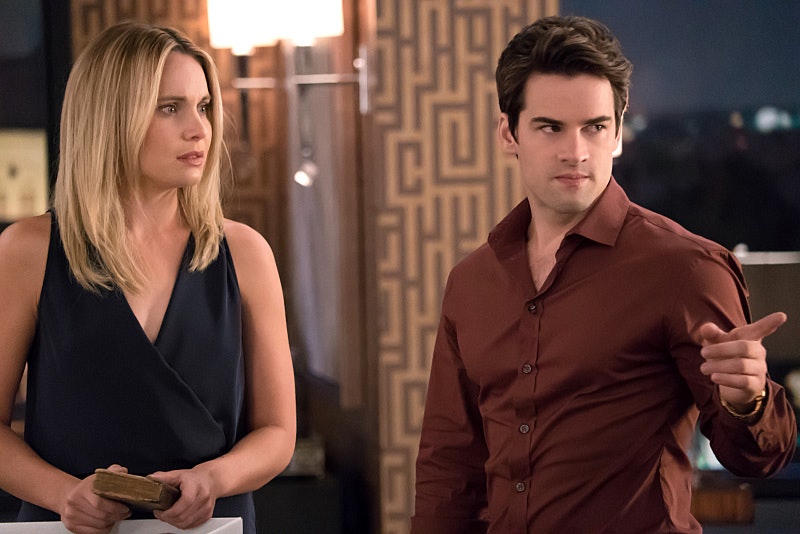 While the Strix went after Rebekah and Klaus busied himself with Aurora, Lucien kidnapped Cami and Detective Kinney on The Originals. Desperate to find a magical object hidden in Cami's closet of black magic artifacts, Lucien took Cami, Detective Kinney, and the evidence boxes from her arrest so that Cami could find what he was looking for. The object, a medallion of sorts, was hidden, according to Lucien, in one of the other artifacts. And he needs it to move forward with his evil plan to take down Klaus and Elijah. But, something tells me there's more to Lucien's obsession with Cami than meets the eye — what does Lucien really want with Cami and why kidnap her?

If you don't remember from last week, Kinney arrested Cami for murder and issued a search warrant for her room full of family heirlooms and magical objects, making it the perfect moment for Lucien to strike. Once in his apartment, he compelled Kinney to hurt himself to make Cami comply with his demand to search through her family's things. Cami drinks vervain, so she cannot be compelled until it leaves her system, and Lucien needs her because the medallion he's after appears to be hidden inside one of the many trinkets. So, while Cami searches, Kinney gets a crash course in the compulsion, courtesy of Lucien forcing him to slash his own ankle. (Ouch!)

Cami reluctantly agreed to look through the items to save Kinney, but pushed back, forcing Lucien to recount the real reason he wants to hurt Klaus, Elijah, and Rebekah. Years ago, after they were first turned, Elijah compelled Tristan, Lucien, and Aurora into believing that they were the Mikaelsons. They became decoys for the Original vampires to distract their father. For one hundred years, they ran, until Elijah was daggered and his compulsion undone. This is why they want to destroy Klaus, Elijah, and Rebekah — to get back at them for stealing years of their lives.

After hearing Lucien's sob story, Cami managed to trick him into healing Kinney and almost managed to attack him with a knife, but he was too fast, and she ended up handing over the medallion. Unfortunately, Tristan isn't done with her yet. No, instead, he is going to keep her until the vervain runs out of her system and she can be compelled to forget helping Lucien. But, what makes him think he will be able to keep Klaus occupied long enough for that to happen? He has to notice Cami's absence eventually. Also, there must be something more to Cami's role in all of this. Lucien can't just have needed her to find the medallion. Maybe she knows something about it Lucien doesn't? Or maybe he just wants to keep her as a bargaining chip? Only time will tell.