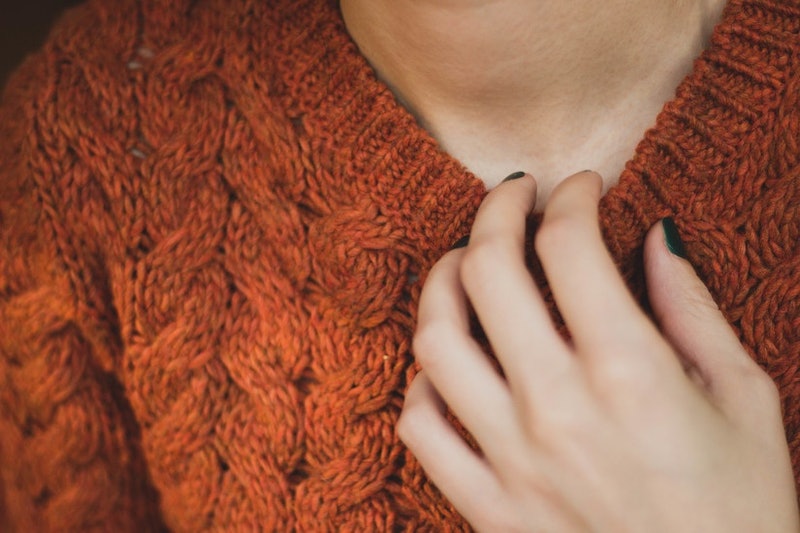 You've probably known since childhood what your allergies are, whether it concerns peanuts, soy, milk or shellfish. But figuring out whether you're allergic to alcohol isn't easy, as many of the symptoms of such an allergy can be mistaken for the unpleasant yet common side effects of drinking too much. Some people might even misinterpret an allergic reaction as a particularly ugly hangover that can be slept off. I mean, alcohol isn't meant to make you feel good the next morning, right?

But it's important to learn about alcohol allergies, because although they're rare, they do exist. Just like any other allergy, they shouldn't be ignored — leaving them untreated for a long time could lead to severe allergic reactions that could land you in the hospital. You'll also feel a lot better if you're aware of what to avoid going forward, and what to drink more and less of.

Before we get into the specific signs of an alcohol allergy, though, you should know this: Having an allergy to alcohol isn't interchangeable with having an alcohol intolerance. The latter is much more common, as researchers at Johannes Gutenberg University of Mainz discovered during their study of 950 regular drinkers. Almost 25 percent showed signs of intolerance. The symptoms of alcohol allergy and alcohol intolerance have quite a bit of overlap, but there are small differences here and there that make a huge difference in telling them apart.

There hasn't been much research on allergic reactions to alcohol, but there's enough information out there to know what the symptoms are, and why they're dangerous. If anything below rings true for you on a regular basis, schedule an appointment with your doctor.

Here are five signs you're allergic to alcohol, as well as how to tell them apart from the symptoms of alcohol intolerance. Keep them in mind next time you're smack dab in the middle of happy hour.

Alcohol flush reaction is an extremely uncomfortable way your body informs you that you're allergic to alcohol. Your face, neck, and chest turn bright red, and everything gets warm to the touch. This happens because your body isn't wired to metabolize alcohol. You are able to break down alcohol into acetaldehyde, but you lack the enzyme ALDH2, which is what processes the very toxic acetaldehyde into harmless substances that can be flushed out of your system.

There's more to it than redness on your skin, though. The alcohol flush reaction can be extremely uncomfortable. You feel dizzy, maybe lightheaded. Personally, my face actually breaks out in blotches and blemishes, and it feels like my heart is going to burst out of my cheeks.

How It's Different From An Intolerance: People who have an intolerance will likely see a flushed, red face staring back at them in the mirror after a few beers, but the aches and pains don't necessarily accompany the blush. So if you're a little pink in the cheeks without the physical discomfort, don't worry too much — you're probably not fighting an allergy.

If you're breaking out everywhere in hives, it means you're facing anaphylaxis, a serious allergic reaction that turns your whole body hypersensitive. Keep a close eye on what the red spots feel like — if they're super itchy and painful, stop drinking immediately. Hives are a big sign that you're allergic to sulfites, a group of compounds which are naturally produced in alcohol. Be extra wary if you're asthmatic; 10 percent of people with asthma have a bad allergic reaction to alcohol because of the sulfites present.

How It's Different From An Intolerance: You might experience a few itchy, dry spots on your skin from those cocktails you had last Friday night. If they're not particularly painful, they're probably not a big deal, and they're just indicators that you might want to cut back a little bit on the amount you're consuming. It could also point to an ingredient in the booze that doesn't sit well with you, like gluten.

3. Your Nose And Mouth Swell

If you feel parts of your face getting puffy, you could be allergic to histamine, a compound generated by the bacteria and yeast in alcohol. It's found in red wine, so if you're a Cabernet Sauvignon aficionado, sorry to inform you that it might be time to give it up. Swelling of the nasal passageways could result in difficult breathing, so it's not a symptom that should be taken lightly.

How It's Different From An Intolerance: Grabbing a tissue to combat a runny nose is a very common side effect of alcohol intolerance. If you've got a stuffy nasal passage that doesn't seem to be swollen or constricting your ability to breathe normally, you can rest assured that your issue is probably one of intolerance. Keep track of what you're drinking, and how much of it, to figure out a way to prevent this symptom.

4. You Get Stomach Cramps And Nausea

Alcohol isn't exactly the most soothing thing to put in your stomach, especially in large quantities. But you shouldn't be wrestling with intense pain just because you had a few beers. Excruciating stomach pain, nausea, and diarrhea point to a potential alcohol allergy — and/or an allergy to histamine, which is known to swell your blood vessels and cause acute abdominal cramping.

How It's Different From An Intolerance: A tummy ache is to be expected if you make your way to a brewery without realizing you're intolerant to the wheat they use in your favorite beer. If you're only facing some discomfort, like annoying gas pain, free of the urge to run to the bathroom and puke, it's likely that the ingredients in your choice of beverage just don't vibe with you.

This generally falls under the umbrella of alcohol flush reaction. While your skin turns bright red and you can't stop scratching the hives you've broken out into, don't be surprised if your heartbeat has skyrocketed and you feel slightly dizzy. This is incredibly uncomfortable, and you probably will have the feeling that you need to sit down for a second.

Obviously, whenever your heart rate escalates, it's hard to catch your breath. Dr. Heinz Decker, author of the Johannes Gutenberg University of Mainz study, says that when you notice a change in your overall breathing pattern, you should schedule an appointment with your doctor — and probably lay off the booze for a little while, at least until you figure out what's going on.

How It's Different From An Intolerance: This can be a tough distinction to make, because an increased heart rate is a symptom of intolerance as well. For the most part, though, those who don't have a true allergic reaction won't experience this side effect as severely — your heart may be working a bit harder, but you won't battle the same debilitating shortness of breath.