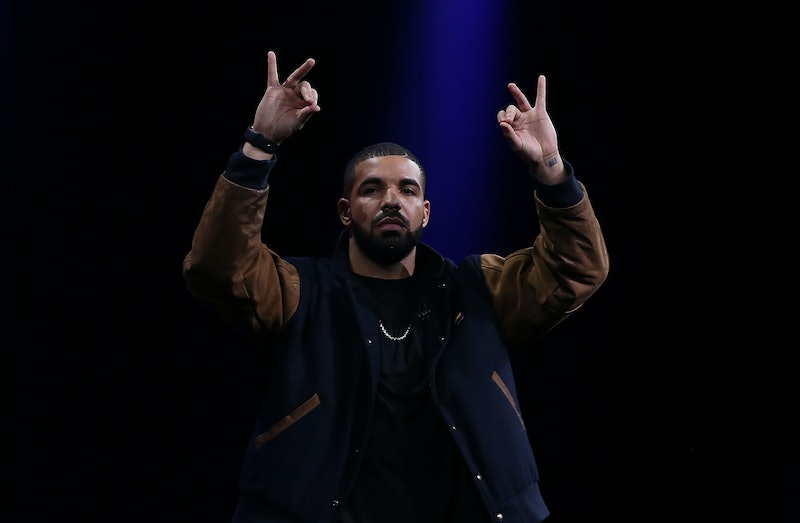 As if there wasn't already enough excitement on Friday, with both Justin Bieber and One Direction dropping their albums on the same date, now it looks like the track list for Views From The 6 , Drake's forthcoming album, might have been leaked. Following the Internet-mania that the "Hotline Bling" video caused, inspiring a million parodies and spoofs, anticipation for the album has only grown, with fans excited to find out who Drake's worked with on his newest record. If anything, this alleged track list leak only fuels the excitement of Beliebers today of all days (Purpose is real, y'all!), as track 9 on Views From The 6 apparently features Justin Bieber himself, on a song called "Smeared." However, Bustle reached out to Drake's representatives, who said that they can't confirm information about the album at this time.

Friday also saw a tweet hint at the release date of Views From The 6 , suggesting the album will be out on January 6 2016. So much talk of the album has only gotten me more excited, even if nothing that's happening is confirmed by Drake or his people yet. It's basically raining Drake news at this point, and I'm screaming even if all of that news turns out to be fake in the end. All of this happening happening on the same day that Purpose and Made In The A.M. were released feels a bit like that time I drank way too much Cherry Coke in the space of an hour. But what have we learned from the alleged track list?

According to this yet to be verified track list, Beyoncé features on not one, but two whole tracks. Which is majorly exciting. Other collaborators listed include Rick Ross, Future, Kanye West, Justin Bieber, Lil Wayne and Popcaan — which is an impressive collection of artists if the list turns out to be legit. Based on the alleged track list, it appears that none of the Drake songs which previously leaked are included. Should that be our indicator that this list isn't real? I mean, why would Drake waste time putting so many singles that don't even make it onto the album that we've all been waiting on, or onto the mixtapes he's released in the interim?

It makes no sense, but, if that is what's happening, on the bright side, this means even more new Drake music for our ears. (And hopefully our eyes, if the "Hotline Bling" video is any indication of what he has in store for us.) Excuse me while I go have a lie down now to process all the amazing events that have (allegedly) taken place today. Thank you, Internet, for never letting me down!