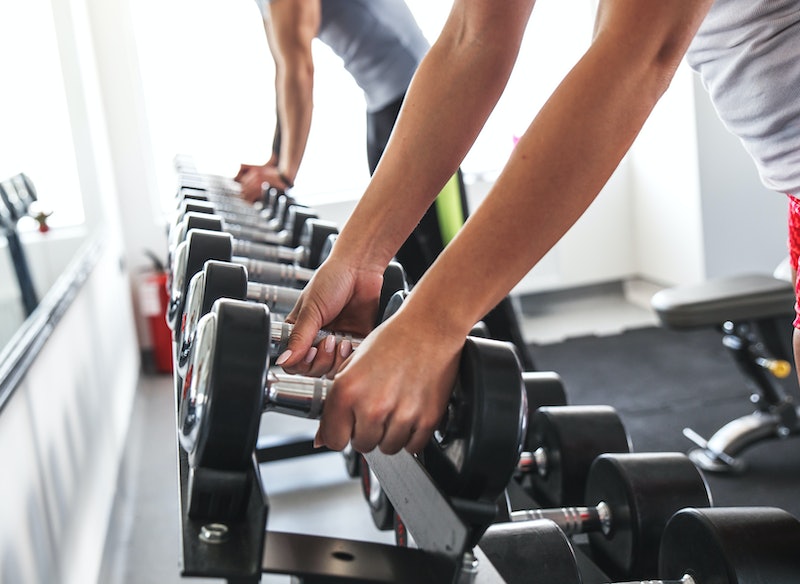 So who out there actually likes the gym? If you'd have told me a year ago that I would answer that question affirmatively, I'd have considered you hilarious. All through college, the gym was that place I begrudgingly went when it was too cold to run outside in Chicago.

But then, a few weeks after graduation, I found myself in possession of a gym membership, and while walking past the weight room on my way to the yoga studio I'd think to myself maybe I should at least know what all this stuff is even for? So I signed up for sessions with one of the health club's personal trainers. It was one of the best decisions I've ever made, and not just because my trainer was awesome and totally body-positive. So to any of you trying to live up to your New Years resolutions, here's my rationale for why the gym is actually awesome.

The thing about the gym is that, in a world that constantly frames women's health around our need to get smaller, it's the only place I've found where goals are all about increasing. As women, we are bombarded with the message that we are too big. We need to take up less space, to make the numbers on the scale go down, to measure our waists with fewer inches. We are told to shrink. To me, that is not health, that's death. Making yourself lesser is just not an attitude I find appealing at all.

But at the gym, unless you're focusing on decreasing what you see on the scale, the numbers go up, not down. Your muscles get bigger. The weights you lift get heavier. The time you can hold a plank gets longer. The number of exercises you can master get more numerous. It's a way out of the thigh-gap, bikini-bridge, thinspiration death spiral.

It's also a chance to move your body in new ways. I'm generally of the opinion that whatever level of activeness makes your body feel best is how active you should be, but what I've discovered from my time in the weight room is that diversity of movement is important to. Personally, my body's happiest when I'm pretty active, which is why I've been a runner for a long time. But running, I've come to realize, is just one movement pattern. And being stuck in one movement pattern, whether it's riding a bike or sitting at a desk, is boring. The gym gives me the chance to move in all kinds of different ways, which is awesome.

And most importantly, it all makes me feel good. It's even – dare I say it – kind of fun. It's fun to move in new ways. It's fun to watch your progress. It's fun looking at the 7.5 lb dumbbells I once used and thinking, "look how cute and tiny they are." And then picking up the 25 lb dumbbells and feeling like a champ. And yeah, I've lost some weight and that's nice and all, but feeling like you can do anything? That's better than nice. Because at the end of the day, bodies aren't for looking at, they're for living in. So the real measure of how great they are is whether you can do everything you want in them. And the more stuff you can do, the more awesome that is. Because again, it's about more not less.