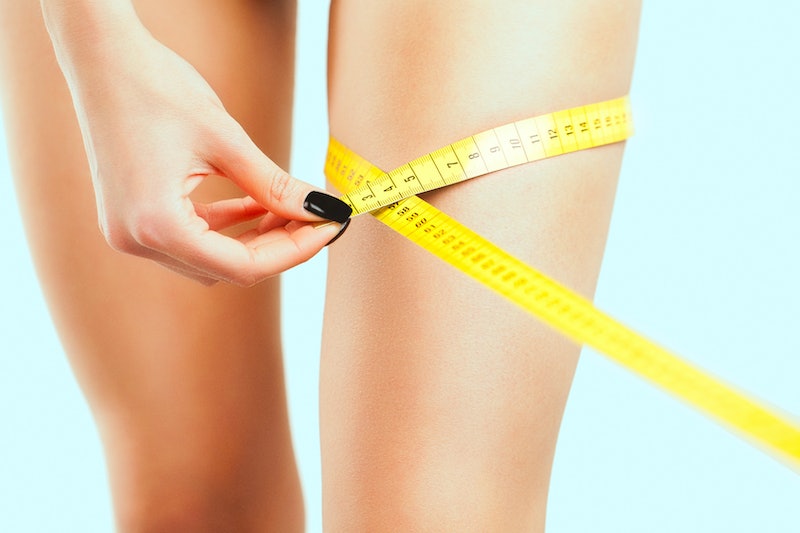 Recently, in my quest to be healthy without succumbing to body image issues or falling into the trap of unrealistic beauty standards, I found myself at the gym with my mother. Not our usual routine, but whatever. As we’re changing in the health club locker room, she looks into her bag and complains that she’s brought the wrong pair of workout pants. “I hate these,” she says, pulling them on anyway. “Here, can you tell that they’re basically just leggings?”

“A what?” she asked, incredulous. Which of course only made me laugh harder.

My mother is thin — way thinner than I will ever be since I take after my Dad’s side of the family. But despite being one of those people who is just naturally skinny, one of those people Lululemon apparently likes, my mom still struggled a lot with body image and her relationship to food for a long, long time. She did everything she could to avoid passing these issues on to my sister and me, with a surprising degree of success considering the messages teenage girls are constantly bombarded with today.

But despite my mother’s history of unrealistic body standards, she had never even heard of a thigh gap — something I found highly telling. Why is thigh gap something we suddenly want now? How can this thing be an ideal if only a generation ago, no one had even heard of it? Thigh gap doesn’t actually accomplish anything, after all, except maybe making life easier for your jeans. And yet girls are starving themselves trying to achieve one. And all for something somebody clearly just made up. It makes no sense.

Which, incidentally, is what my mother thought when I tried to explain the concept.

“No seriously, what is it?”

“It’s…” How did you even describe it, I wondered. I’d never had to. I just instinctively knew what it was, which is also pretty telling. “It’s this thing that girls want now, where your thighs don’t touch,” I tried lamely.

“Why does that matter?”

“And I have it?” She seemed alarmed.

She looked. “Oh but that’s ridiculous,” she said. “I’m standing with my feet apart.” She put her feet together. “There, see? No more thigh gap.”

“No,” I protested, sensing that this was getting away from me. “It’s not — obviously if your feet are together it isn’t there. It’s when you’re standing with your feet apart.”

“That doesn’t count,” I tried to explain. Although it was a very good point, I had to admit. How did you calculate how far apart your feet would have to be? “Shoulder width,” I decided on-the-go. That was usually a good rule of thumb, yes? “If your feet are shoulder width apart. There, like that,” I said as she adjusted her stance. “You see how your legs aren’t touching.”

“I know,” I said, trying not to laugh. “And most people aren’t. Here, come over here.” I pulled her over to a mirror, and we stood, both with our feet shoulder distance apart. My thighs clearly touched for a good four inches or so. My mother’s came close — I suspect she was trying to inch her feet closer together — but did not.

“See,” I said. “Yours don’t touch and mine are always going to. It’s just body types.”

“And girls nowadays want this?” she asked, very skeptical.

“Some girls,” I told her. “Not me,” I added. I didn’t think she worried about me anymore, but I like to be safe.

“But you just said it’s all about body types,” she protested. “That some people are built with ‘thigh gaps’" — she pronounced the phrase like some obscure particle of physics she wasn’t sure was actually real – “and some people aren’t.”

“Exactly,” I said, happy that she seemed to have grasped the concept at last.

But then she wanted to know: “So why is this even a thing? Why does it matter?”

I changed the subject. I still don’t have a decent answer for her. I suspect there isn’t one.