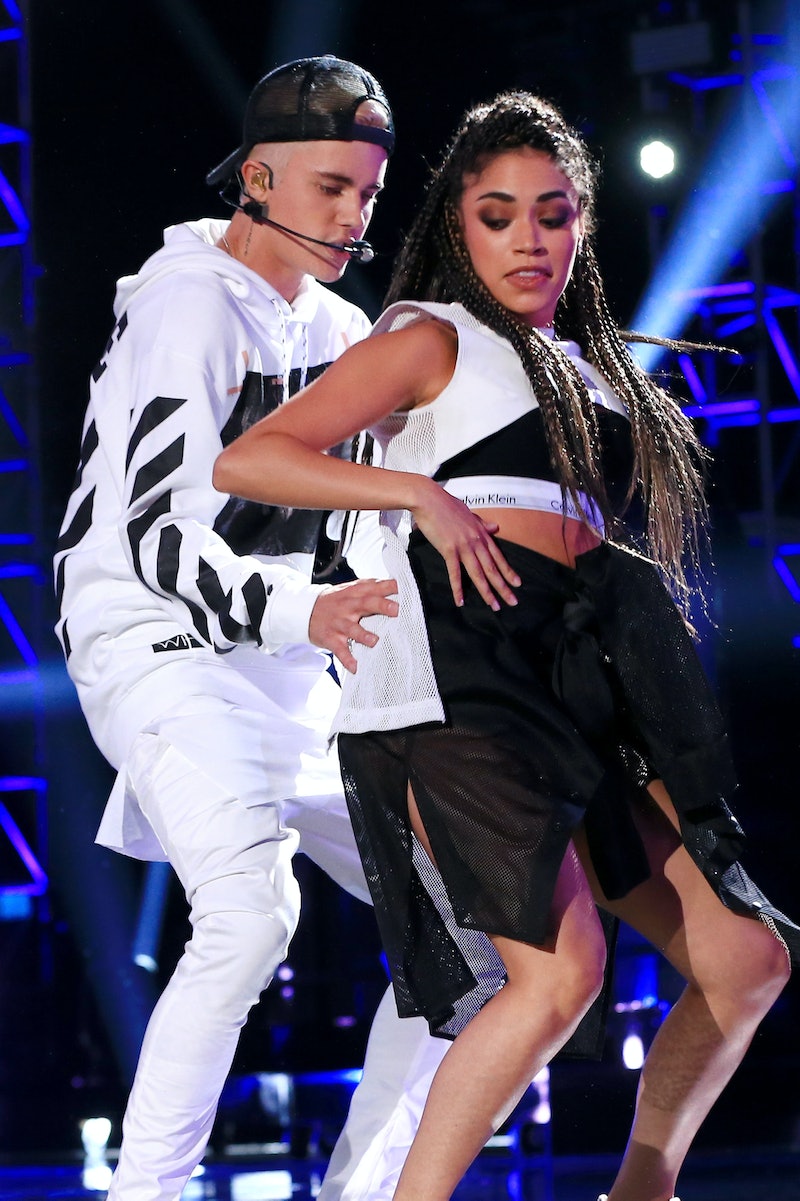 There's no time in your life that can't be improved by a Justin Bieber song — you know, if you're a Justin Bieber fan — so the release of Justin Bieber's Purpose breathed new life into the music game, more than proving that the pop star is backing up his apology tour with action. And that action is reminding us why we respected him as a musician, even if we were upset at his less-than-stellar personal life. Since Purpose's release, we've had plenty of time to analyze every last song on the album and figure out what it means and who it's about. Of course, there's no way of knowing whether or not we're right unless Bieber outright explains, but it sure is fun trying to figure out on our own. Take "Love Yourself," for instance. It's clearly a big old eff you to some woman in his life, but which one? Who is Justin Bieber's "Love Yourself" about?

"Love Yourself" tells the tale of a woman who's clearly wronged Bieber by using his name to up her own profile, thinking too highly of herself, and breaking his heart. These are serious accusations, and one Bieber didn't really even want to write about, lest anyone think he actually still cares about the girl it's about, but sometimes it's best to sing it out, I suppose. I don't know about you, but I so want to know who this one is about, so let's use some deductive reasoning here and see if we can come to an agreement.

Gomez and Bieber were together on and off for about four years, and the relationship is without a doubt the most serious he's had so far. We already know that "Mark My Words" is about Gomez, and since that song is all about how he doesn't want to live a lie and he doesn't want to lose her, something tells me she's out of the question on this one.

Bieber and Jarrell were linked in 2009 and 2010 after collaborating on "Overboard" and going on tour together. They were pretty cute together, but they were also just kids at the time, and that was more than five years in the past, so something tells me Bieber has moved on from this relationship. Let's rule her out.

I don't know if we can necessarily call Bieber's time with Ventura a real relationship, but they at least hooked up for a short period of time in 2014 during one of his breaks from Gomez. Ventura is a successful Spanish model and we haven't heard too much from her about her liason with Bieber, so I think it's safe to disclude her.

Pierce was a beauty blogger and Instagram star who hooked up with Bieber earlier this year, flying out to LA to meet him and also traveling to Bora Bora with him. Unfortunately, she also went to the press to tell the secrets of their relationship, like that Bieber likes to cuddle and that he works out to his own music at the gym. Yikes! She obviously did this to increase her own press, so my money is on Pierce because of it — and because it's still a pretty fresh situation in Bieber's life.

Bieber was involved with model Jeffries in the beginning of 2014 (she was the one with him in Miami when he got that drag racing DUI), though their relationship didn't seem to last very long. Because of the lack of seriousness there, I doubt Jeffries was the subject of "Love Yourself".

Verdict: My money's on Jayde Pierce. Whether or not that's ever confirmed remains to be seen, but I'd bet on it.