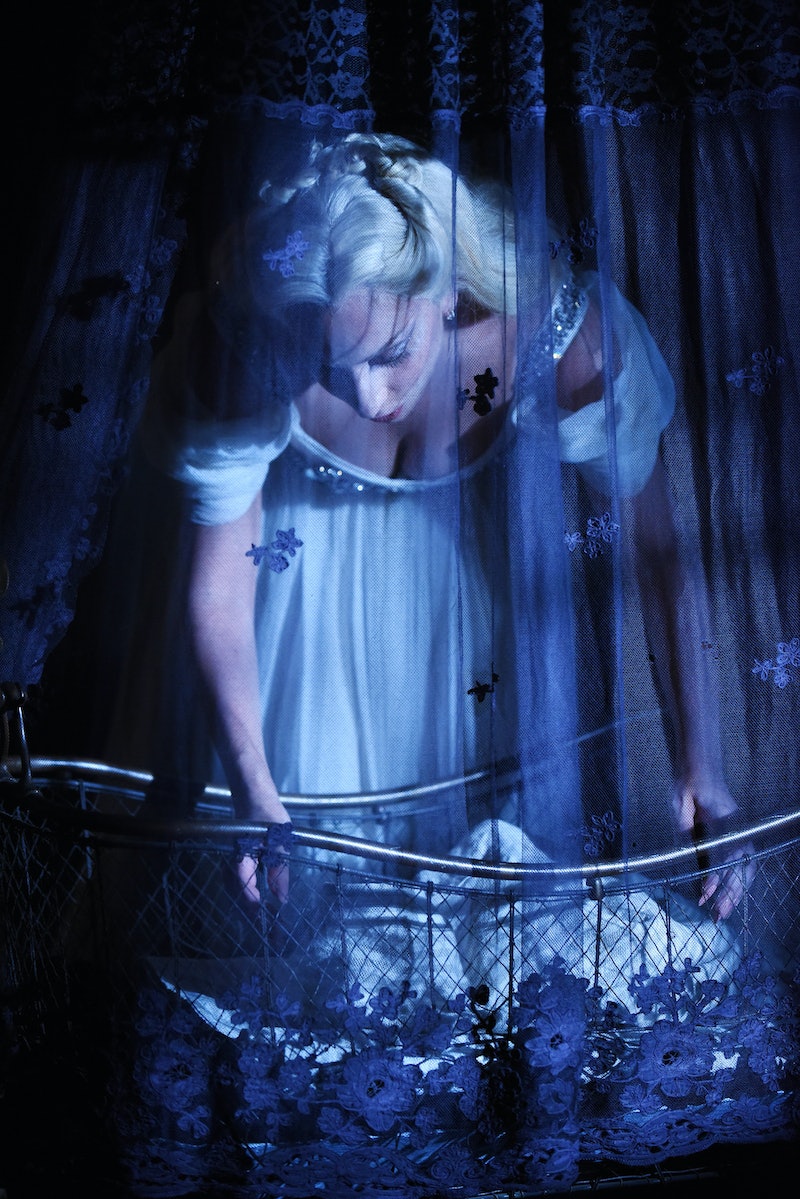 What's behind Hotel Cortez's Room 33? It's a monstrous creature, but perhaps the smallest one that American Horror Story: Hotel has to offer. Lady Gaga's character's son is "the thing in Room 33," and it brought out some seriously surprising maternal instincts in the hotel's mysterious owner. After The Countess sliced the throat of her pretty plaything Tristan for falling in love with Constance (FYI I'm still sobbing over that scene), she rushed to the room of Bartholomew, her son who doesn't quite share his mother's looks. Bartholomew does not appear to have a nose or eyes — his appearance is almost corpse like. What Bartholomew does share with his mother is a craving for blood and what appears to be an inability to age, which may mean that he is also a vampire. So why does he look the way he does? It may be a side effect of vampire breeding; aka Bartholomew might be the result of two vampire parents, not just one.

Bartholomew's birth was anything but conventional, and if The Countess had her way, it may not have happened at all. The Countess went to Dr. Montgomery — aka the Dr. Montgomery from American Horror Story: Murder House — for an illegal abortion in the 1920s. Though she was only three weeks pregnant, her belly was already swollen to that of someone ready to give birth. The procedure went on as planned, but Bartholomew survived the attempted abortion — and killed his nurse on the way out. Doing anything for survival? Sounds a lot like his mother, partly thanks to the vampire virus in her blood.

We know that The Countess was turned to a vampire at some point around the 1920s, as she was born very early into the 1900s and stopped aging after she was turned. From her unconventional pregnancy, we can infer that maybe she was turned either right before she got pregnant, or even, perhaps, at the very same moment. What if that is how The Countess became a vampire in the first place — by becoming pregnant by another vampire?

The Countess clearly did not know what she was in for when she went to Dr. Montgomery, which suggests that maybe she was a brand-new vampire searching for answers when she sought out an abortion. That may be the thing that ultimately connected The Countess and Bartholomew in the first place: She realized that in many ways, he was just like her. Their connection might go well behind mother and child. Much like Alex and Holden, these two could be kindred spirits and "soul mates." They certainly do share a love of murder.

And, although many have suspected that Countess Elizabeth's husband was Mr. March, he might not be. Unless March is both a ghost and a vampire he likely couldn't have produced the vampire offspring with Elizabeth. That stands to reason that perhaps Bartholomew's father is someone else entirely that we haven't even met yet.

I'm intrigued by the maternal side of The Countess, and why Bartholomew is the one person she seems to genuinely love, despite her vampirism that numbs her from real feelings. Here's hoping that we find out exactly why the "thing in Room 33" became who he is, and whether he really is a vampire just like his mom.