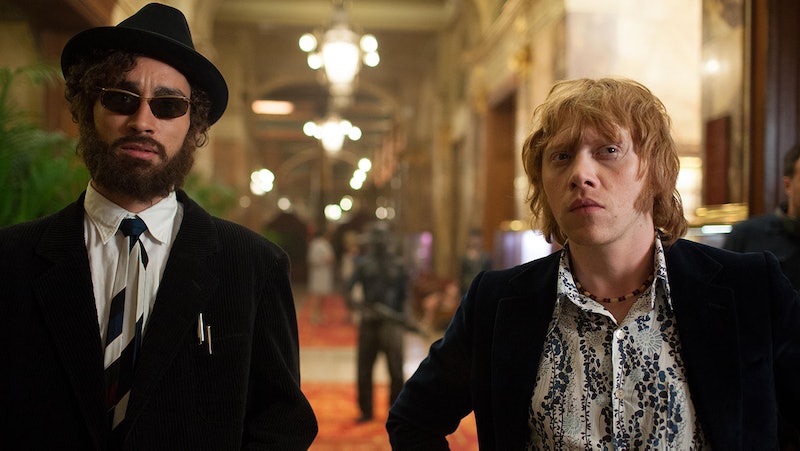 Few events in history have been surrounded by as many bizarre conspiracy theories as the moon landing. For some people, the idea that astronauts Neil Armstrong, Buzz Aldrin, and Michael Collins walked on the moon in 1969 is beyond belief — however, they have no problem embracing the idea that famed director Stanley Kubrick faked the moon landing. Yes, there is a faction of conspiracy theorists who believe The Shining director Kubrick faked the moon landing, and it is this wild theory that forms the loose basis for Rupert Grint's new comedy Moonwalkers .

The movie, which also stars Ron Perlman, ups the ante of the real life crazy theory by turning the "faked" moon landing into an experimental film of epic proportions. Grint stars as down on his luck band manager Johnny who is mistaken as Kubrick's assistant by Perlman's ultra-serious CIA agent. Since he needs the money, Johnny ropes his friend into impersonating Kubrick, and if the trailer is any indication, Moonwalkers only gets crazier from there. The comedy takes the bizarre Kubrick conspiracy and runs with it when Johnny and his friends end up hiring a hedonistic experimental film director to fake the moon landing. Moonwalkers premiered at the SXSW film festival earlier this year and garnered enough attention that it will hit theaters stateside on January 15, 2016.

As bizarre and hilarious as the movie looks, this is definitely a case where the truth is stranger than fiction. The Kubrick moon landing theory has been making the rounds for decades, fueled by Kubrick's directorial prowess in 2001: A Space Odyssey . Some conspiracy theorists believe the American government hired Kubrick to film a fake landing either as a precaution in case the real landing yielded bad footage (because who is going to be impressed by humans walking on the moon if the production values are low?) or to make sure America had footage no matter what, ensuring the country won the space race. What did Kubrick supposedly get in return for his services? Leftover NASA lenses to help him shoot Barry Lyndon using only natural light. Barry Lyndon was released in 1975, so clearly Kubrick was playing the long game... or, you know, this conspiracy is super wrong on every level.

The Kubrick-faked-the-moon-landing theory only becomes more convoluted when you factor in the excellent faux documentary Dark Side of the Moon (2002). Director William Karel's mockumentary features everyone from Aldrin to Kubrick's wife Christiane Kubrick seemingly admitting Kubrick filmed the faked moon landing. The film was meant to be a humorous take on not believing everything the media tells you, even if it is wrapped in a realistic package, but despite a blooper reel and some familiar fictional witnesses from The Shining and 2001: A Space Odyssey , not everyone got the joke. Instead, some viewers took Dark Side of the Moon seriously, which only intensified the theory's prevalence among moon truthers.

Kubrick's name has been attached to so many different conspiracy theories, the spooky documentary Room 237 was eventually made to discuss them all. Once again, the supposed moon landing hoax was discussed in depth by believers and people who understand the coolness of actual humans walking on the moon in 1969 without any help from a Hollywood film director. Even now, the theory continues to persist.

The good news is, this strange historical conspiracy theory has led to a reality where Ron Weasley — I mean Grint — gets to fake the moon landing in what appears to be a hilarious comedy with fake space creatures and Grint wearing a space suit. While I can't get behind the idea Kubrick was behind one of history's most monumental real life events, I can and will support anything that puts more Grint in my life. Hopefully Moonwalkers won't inadvertently spawn yet another conspiracy theory in the process.

Check out the decidedly NSFW (but oh so amusing) Moonwalkers trailer below.