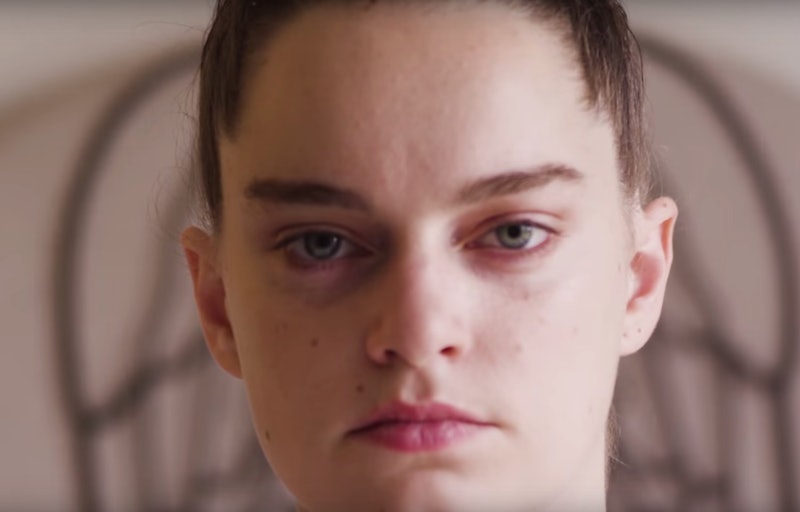 In a turn of events that likely has Beliebers all over the world hyperventilating, Justin Bieber has been releasing one music video every hour Saturday, each one making up one part of his larger Purpose: The Movement short film. Like the music video he released for "Sorry" in October, almost every one is filled with young professional dancers, which means they include a lot of gorgeous modern dance, and a lot of talented dancers. And, for those wondering who the girl in Bieber's "Life Is Worth Living" music video is, look no further: that talented dancer is Emma Portner.

While many of the videos feature an ensemble of dancers, "Life Is Worth Living" is a duet between a woman and a man (in this case, the male dancer in the video is Patrick Cook). Portner takes center stage, her character suffering a presumably self-inflicted bullet wound that grotesquely blemishes her shoulder throughout most of the video before she finds herself miraculously healed at the end of the video. The video's narrative fits in clearly with the song's spiritual lyrics, which depict a struggle prior to redemption.

Like most of the videos in this series, Portner is not depicted in the way that women often are in pop or electronic music videos. The male gaze is absent, replaced with rawness and emotional intensity. While she is scantily clad, she looks more like a dancer dressed for practice; she appears to wear no makeup and her eyes are reddened with tears as she stares bluntly into the camera. Bruises, presumably from the dance floor, are visible. The unique honesty of this depiction and the skill of her dancing and acting will undoubtedly make you wonder, though: who is Emma Portner?

Like Bieber himself, Portner is also an Ontarian. She was born in Ottawa, though she now lives in New York City. She graduated from a performing arts high school in 2012 and took dance classes from age three to 18 at Leeming Danceworks in Orleans, Ontario.

According to her profile with Broadway Dance Center, in addition to studying dance in high school, she has trained with many renowned dance schools, including the Ailey School, the National Ballet School of Canada, and Canada's experimental RUBBERBANDance.

Portner's unique choreography has won several awards, and she's directed her own shows. Alongside Cook, the other dancer in the video, she choreographed the dance for "Life Is Worth Living."

She Has Her Own Dance Company

For such a young dancer, Portner has accomplished a lot. In addition to teaching at Broadway Dance Center, she founded her own dance company called Flock'dance, a group of young dancers dedicated to pushing genre boundaries.

Hopefully, these Purpose videos will help provide more exposure to young dancers like Portner, as well as inspire aspiring dancers.