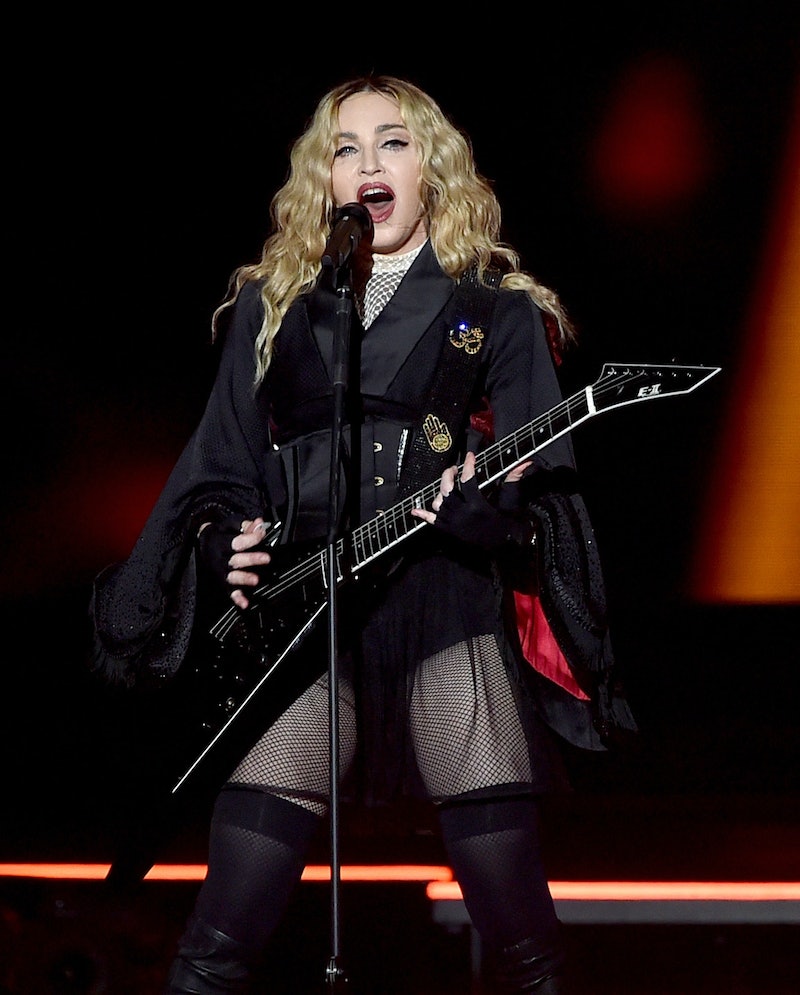 While at her Stockholm, Sweden concert on Saturday, reigning Queen of Pop Madonna gave a heartfelt speech in honor of the deadly Paris attacks that took place the night before. While onstage, the singer urged concertgoers to celebrate life and freedom before performing an acoustic version of her mega-hit "Like A Prayer," and the video of her emotional talk will pull at your heartstrings.

The Material Girl is currently underway with the second leg of her Rebel Heart tour to support her 13th studio album, Rebel Heart, and while the Foo Fighters and U2 have cancelled their European tours in the wake of the recent tragedies in France, Madonna and her tourmates have chosen to continue. During her concert in Stockholm on Saturday night, Madonna explained in a heartfelt speech that she chose to continue the tour because she did not want to give in to the terror. Instead, she wanted to celebrate freedom and the ability to fight for what you believe in. Said the singer, "No one should stop us from doing what we love." She further elaborated:

"It's been really hard actually to get through the show, because in many ways, I feel torn. Like, why am I up here dancing and having fun when people are crying over the loss of their loved ones? However, that is exactly what these people want us to do. They want to shut us up. They want to silence us. And we won't let them."

Madonna continued her speech with calls for peace and the stop of senseless violence, not only in Paris but throughout the globe. She went on to say that the unity and celebration at her concert proves that there is good in the world. It's a subject she's clearly passionate about, as the musician's speech comes one day after the pop icon posted this strong message on her Instagram account:

Madonna finished her speech with a call for people to begin treating one another with greater respect. Before performing, she hosted a moment of silence in memory of the victims. She then proceeded to invite fans to sing along to an acoustic version of "Like A Prayer" as a tribute to the victims. The entire speech and performance can be seen below:

Eventually, Madonna ended Saturday night with this Instagram post, in which she thanked her Stockholm fans for filling the concert with love and for turning darkness into light.

The singer's tour is currently scheduled to perform in Paris in early December, and there's no word yet on whether that will continue as planned. What is certain, though, is that Madonna, like so many others, has no intention of giving in to fear or intimidation, and will continue to promote spreading peace and love whenever possible.