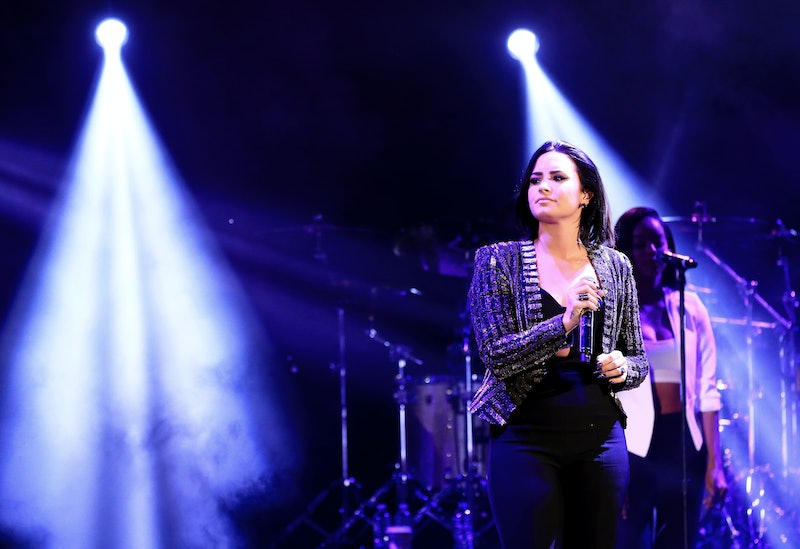 Without a doubt, one of the best — not to mention the most hotly anticipated — songs of 2015 has to be Adele's "Hello." The comeback single from one of our generation's best singers was a long, long time coming and once it finally dropped, the world went crazy for it, myself included. It's beautiful, emotional, vocally stunning, and just downright brilliant — so it makes sense that other artists would want to cover the track and put their own spin on it (even though the original is perfect enough on its own). In fact, Demi Lovato covered "Hello" live at the KISS FM's Fall Ball in Seattle on Friday, and let me tell you — it was amazing.

Taking on an Adele song is a big enough challenge on its own, but covering "Hello," which is still fresh in everyone's minds and at the top of the charts, is even more intimidating, and that alone means Lovato deserves a round of applause. But when you actually hear her version, you'll go even crazier, because it's not just good, it's fantastic. Lovato's vocals are totally on point and her performance is full of emotion. You can totally tell she's giving her her all, and it pays off perfectly.

Pretty impressive, right? I'll admit that I expected to be underwhelmed before pressing play, but I was shocked by just how amazing Lovato's voice sounds and what an amazing job she did with Adele's track. "Hello" is, by nature, an incredibly emotional song, full of longing and sadness and nostalgia, and clearly Lovato was feeling that message whole-heartedly, because it came across perfectly. It's not the original, sure, but it's a damn good version and deserves praise all on its own. The best part is, she's not trying to be Adele — she's being herself, and that's why it works so well.

I'm not the only person who thinks so, either. Even Lovato's fellow Fall Ball performer Becky G was quick to lavish her with praise for the cover, taking to Twitter to give her a shout out:

I think we can all agree Lovato is slaying the music scene, and her cover of "Hello" is just the latest piece of proof.