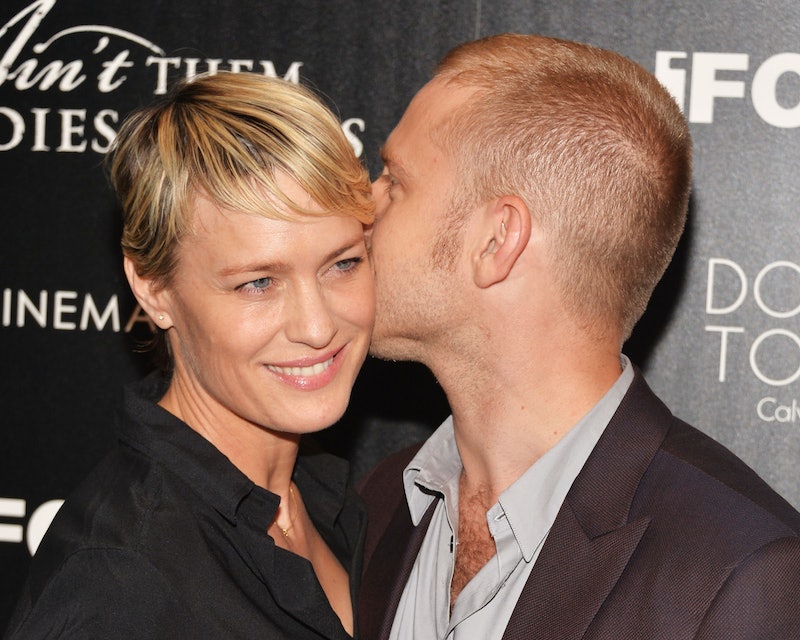 In real life, she was previously married to Sean Penn (oof), and, in fictional life, she is married to Francis Underwood (double oof), but now, it seems House of Cards Robin Wright has aced her game of hearts. According to Us Weekly, Robin Wright is engaged to Ben Foster, three years after her high-profile split with Penn.

Wright and Foster, an actor most well-known for his roles in 3:10 to Yuma and the upcoming Lance Armstrong biopic, confirmed their engagement in Los Angeles Jan. 10 at Diane von Furstenberg's "Journey of a Dress" exhibit. And it's proving to be a busy, but bright, January for the actress: Not only is Wright nominated for a Golden Globe for her performance in Season 1 of the Netflix series House of Cards, but a jaw-dropping trailer has been released for the second season of the show, set to premiere on Valentine's Day.

Wright — who was also previously married to Dane Witherspoon and has two children, 20-year-old Hopper and 22-year-old Dylan, with Penn — and Foster began dating in 2011 after filming Rampart together, but you'll hardly hear the couple waxing poetic about one another in public. How very Claire Underwood.

Instead, they leave it to the sources to talk to media about their relationship, with one who spotted them at an event at the Chateau Marmont confirming, "They're both just really cool ... They were talking to people but weren't over doing it with PDA. They would have their arms around each other and were so chill."

So, next up for The Princess Bride star? A possible Golden Globe, an undoubtedly amazing Season 3 of House of Cards, and, of course...