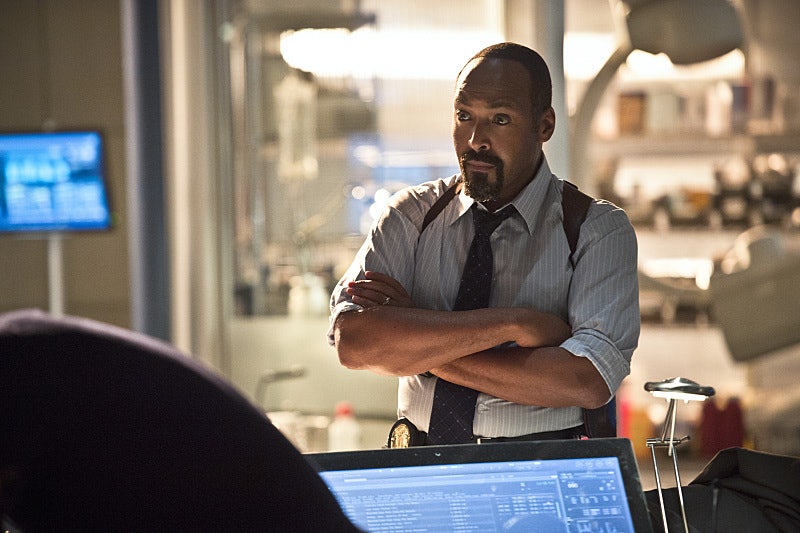 The big enemy to beat during The Flash Season 1 was Harrison Wells/Eobard Thawne as the Reverse-Flash, a man who could not only match Barry in speed, but was also responsible for the death of his mother. But if he was scary, Zoom, The Flash Season 2 villain, is downright terrifying. Physically, he is intimidating, towering over Barry and clearly stronger than he is. He's also dethroned Barry as the fastest man alive, outstripping him in a race and actually catching a lightening bolt Barry hurled at him. Their first battle left Barry badly injured and without his speed, so there is no telling what Zoom will do now that he has proven he can beat the Flash. But he remains a masked mystery and with so many people from Earth-2 resembling their Earth-1 counterparts, you have to wonder, who is Zoom on The Flash?

We don't have that many clues based on how he looks and sounds. As every good fan of Arrow and The Flash knows, voice-modulators are all the rage for superheros and villains alike. Zoom's voice is actually provided by Tony Todd and he is doing some amazing work, because his rasp is absolutely chilling. There are already a number of theories about Zoom's identity, many of which are interesting. However, I am going to counter all of them and say it: Joe West from Earth-2 is Zoom. I know, it sounds crazy but when you think about it, the pieces do line up.

Unlike most of the other characters on the show, there isn't a huge comic book background for Joe. That means The Flash has unlimited creativity for what to do with him, and any of his possible doppelgangers — including making them super evil.

Earth-2 is a parallel universe to Earth-1, therefore the individuals living there can be totally different from the people we've already come to now. Having Joe, the voice of reason, love, and support, be one of the most evil metas that Barry has ever faced would be the definition of different.

Let's be real, The Flash loves to deal in daddy-issues. Barry already has his fair share of them, with Henry Allen having spent most of his childhood in jail. Joe has been a steadying presence in Barry's life for years, so having to fight an alternate version of him would only add to Barry's trauma.

In a blink and you'll miss it moment, an Earth-2 news update revealed that Oliver's father Robert Queen was the Arrow in their world. Maybe that was a clue that another father figure in the Arrow/Flash universe has a very different alter ego in Earth-2.

Sure, Zoom could be a tertiary character or someone new, but having this villain be alteranare-Joe would up the stakes and give everyone cause to change Zoom's ways rather than just kill him.

Joe and Harrison are around the same age, and living (presumably) in the same town, who's to say they didn't cross paths and become friends or colleagues? Earth-2 Harrison said he created Zoom, but maybe they were more like partners.

Whoever is under the Zoom mask is extremely important, and Joe's role on The Flash has only continued to grow. I think we should start preparing now to witness a heartbreaking battle between Barry and one of his fathers before the season ends.