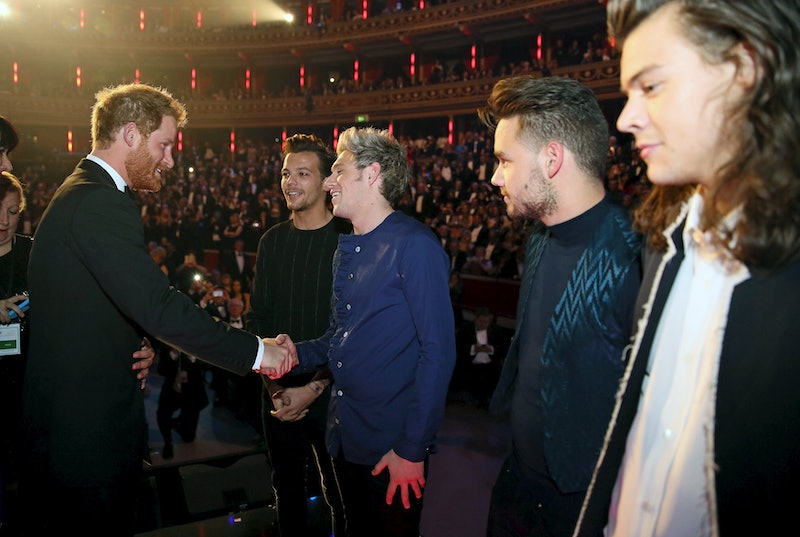 I hope you're not sick of One Direction yet, because the boys are still tops on everyone's mind as far as the entertainment world is concerned. (At least, they will be until Adele's new album comes out. But in the realm of news that doesn't affect the world at large, they're still ranking high up there.) On Monday, Nick Grimshaw interviewed One Direction on the Radio 1 Breakfast Show, giving the boys a chance to answer submitted fan questions over a 20 minute Q&A session that ended in a performance. It was all pretty standard promotional fare, but the Q&A session revealed some things that the general public might not know about the band, or the band members. Hardcore Directioners probably won't be surprised by much of the below, but I certainly was.

The best part of the interview, for me, was how cheerful and lighthearted the boys were. On a Monday, after the horrific events of the weekend, it was lovely to see that the guys could still make their fans laugh and spread some cheer in the world. In particular, for having to be awake so early in the morning after performing on The X Factor on Sunday night, all four of them seemed incredibly perky and even a bit silly. But don't take my word for it.

Check out these seven revelations from the Radio 1 interview.

1. Harry Has An App He Can Talk Through

Apparently, the doctor told Styles that he could either sing or talk on Monday — not both. Thus, he communicated solely through an app that allowed him to type in what he wanted to say and then repeated it in what I presume was Siri's voice. This resulted in amazing moments like Styles spending two questions typing an essay about what he'd do if he was Beyoncé — one that actually came in handy to answer a later question.

2. They Didn't Know What The Word "Sabbatical" Means

Liam Payne revealed that the boys had learned a lot of different words to describe their upcoming break (or, as they prefer to call it, "hiatus"). One such word was "sabbatical." Grimshaw jokingly told Styles not to bother typing it into the app because he was pretty sure Styles couldn't spell it.

3. Louis Does A Good Irish Accent

The boys have all tried to imitate Niall Horan's trademark Irish accent over the years, but Louis Tomlinson proudly displayed his own sort-of-Irish brogue when imitating Horan for a question. I use the word "good" pretty relatively, considering Horan begged them all to stop. But at least Tomlinson's accent was better than Grimshaw's.

You know, when he was younger and not yet weighted down by the burdens of the world. He refused to demonstrate if he could do that many press-ups now, but I bet he can probably double that easily.

5. Harry Is A Towel Tying Expert

The boy just wrapped the towel around his head, ducked his head down, and when he came back up again, it was expertly wrapped around his luscious locks. What magic is this?

6. Liam Has The Ford Angelina From Harry Potter

I don't even have anything to add to this. All I know is that Liam Payne has the flying Ford Angelina from Harry Potter. Not that his flies, but, seriously, if I was a pop star, I would literally have made the same purchase. So, for this alone, Payne might become my second favorite member of the band. (Sorry, Niall.)

7. Harry Styles Is In "Nashville" House

When asked if he wanted to add any final words, or maybe confirm or deny when Payne said he was in Gryffindor, Styles used his App to reply, "Nashville, Nashville, Nashville, goodnight." So, I'm guessing there's a mysterious fifth house called Nashville, and that's the one he's in? Someone ask J. K. Rowling about this, STAT.

Check out the interview below for more fun and laughs with the boys. After all, that hiatus is coming up any day now.