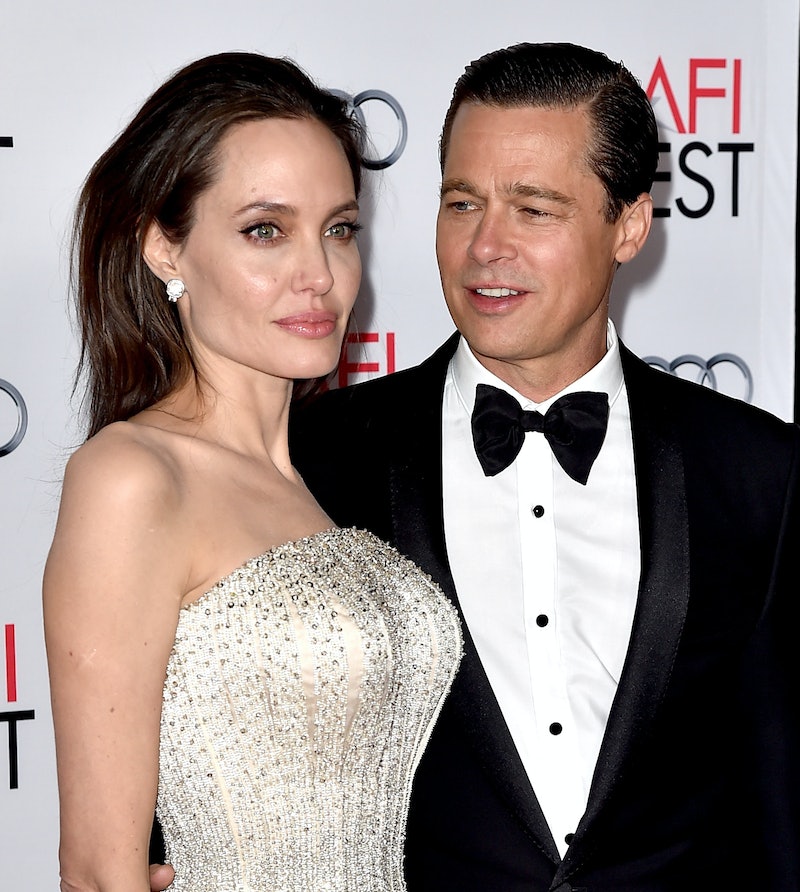 I'll admit it: I wasn't on board with the Brad Pitt and Angelina Jolie relationship at first. After all, I've been strictly Team Jennifer Aniston since the first time I watched Friends, so their divorce hit me about as hard as it hit them. But over the years, it's become hard to ignore the fact that Pitt and Jolie are kind of perfect for each other. Not only do they have similarly successful careers, but they seem to be kicking butt at raising their brood of children together... and saving the world at the same time. And best of all? Jolie and Pitt support each other no matter what.

As we've all seen just by the number of celeb couples who have split this year alone, it's hard to have a lasting marriage in Hollywood. But so far, Jolie and Pitt have managed to make their union span over ten years. And even though they just tied the knot last year, their relationship definitely seems to be stable, and I think that can be attributed to the fact that they always have each other's backs.

These are just a few of the times that the By The Sea stars have said super supportive things about each other to the press. If how these two talk about each other to everyone else is any indication of how they treat each other in private, this marriage is going to last for many years to come.

1. On Being Honest With Each Other

Because sometimes, supporting someone fully is all about honesty — and loving them for who they are, flaws included.

2. On Making Each Other Proud

"One of the best things I’ve done is ensure my kids have a good mother," Pitt told The Daily Mail . "Of course I want her approval. Angie is a force, she cares deeply. I want her to be proud of her man."

Who doesn't want to be described by their husband as a "force"? It's obvious that these two work to make each other better people, and that's an awesome relationship to have — especially when you work in a competitive industry like these guys do.

3. On Jolie Having Her Ovaries Removed

“I knew through the surgeries that he was on my side and that this wasn’t something where I was gonna feel less of a woman because my husband wasn’t gonna let that happen,” Jolie said while appearing on Today earlier this month. “To face these issues together and speak about them and talk about what it is to be human, I think can be a beautiful thing.”

4. And Then Pitt's Side Of Things

"It was mature. [There] was an excitement to where this is our life, we're gonna make the best of it," Pitt said in the same interview. "There was a strength in that. It's just another one of those things in life that makes you tighter. She was doing it for her kids, and she was doing it for her family, so we can be together. It trumped everything, everything and anything."

He's right — having her ovaries removed to thwart off the possibility of cancer was such a brave thing to do.

“Angelina is just amazing. I’ll be tired and lie down on the sofa and then she’ll keep going until late at night," Pitt told Psychologies magazine in 2014. "And that makes me feel like, ‘Why am I taking it easy?’ so I’ll go help out and play with the boys and get them to bed. You realize that you always have the energy inside you, and as a parent you need to have a lot of willpower.”

Get off your butt and help your wife, Pitt!

“It’s not just that I love being in Brad’s company, which obviously I do, but it’s that we both roll up our sleeves and take on what we care about in the same way,” Jolie told W . “I have a lot of respect for him, and he helps me to be better and fight hard for things that I love.”