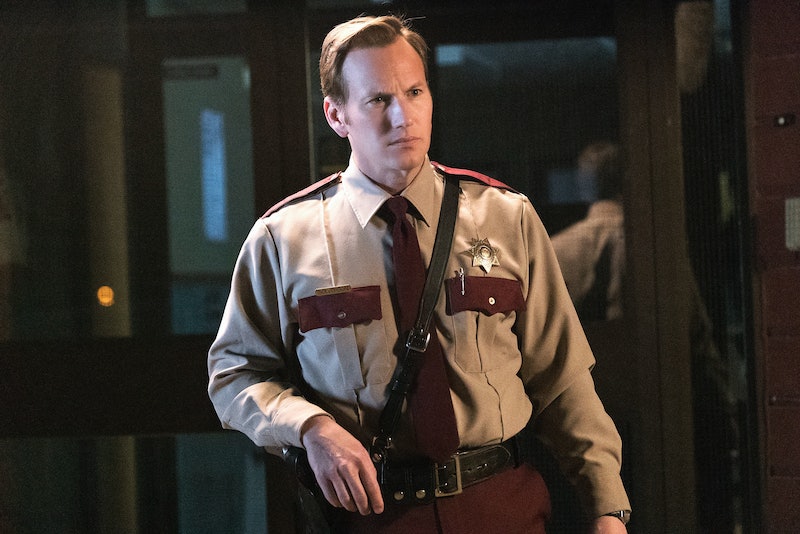 After last week's spate of violence — both in the woods courtesy of a skirmish between the Gerhardt clan and the Kansas City and in Ed's butcher shop courtesy of a botched assassination — it seemed impossible that this week's episode of FX's Fargo would be anything less than an outright bloodbath. However, the writers have to save something for the Sioux Falls Massacre the entire season has been building towards, so the death toll this Monday was surprisingly low... and that's all thanks to one unlikely hero: Karl Weathers.

The verbose Vietnam vet played by Parks And Recreation's Nick Offerman has, until tonight, merely flitted about the periphery of Fargo Season 2, one of many colorful characters populating the Coen-esque world created by showrunner Noah Hawley. But Karl came to the forefront this week by literally coming to the rescue.

When the Gerhardts learned that Charlie fumbled the murder of Ed Blumquist, they planned to head to the sheriff's station and kill two birds with one stone: rescue the boy from the clutches of the Luverne police and also finish what Charlie started, since Ed was also in custody for killing that Gerhardt henchman last week. Outnumbered and outgunned, things didn't look too good for Lou Solverson and his hapless deputies.

The conspiracy theorist got wrangled into the melee when he was hired as Ed's lawyer. Called in from the local VA, Karl was already three sheets to the wind when he got to the station, monologuing hilariously about rights and the law and a whole bunch of grandiose nonsense. The look on his face when he saw the posse of Gerhardts assembling outside with shotguns in hand was priceless. And yet he was the only person who had a chance of ending the conflict peacefully.

While Lou smuggled Ed out a back window, Karl distracted the mob by trying to negotiate. Fortunately, the lawyer found himself face to face with Bear, probably the most reasonable of the Gerhardt clan, rather than his hotheaded older brother Dodd — who was busy facing off against his own Blumquist on the other side of town. Karl told Bear that Charlie, being a minor with no previous record, would likely only face five years in prison on charges of attempted murder. On the other hand, if Bear broke Charlie out of jail, then his son would face a lifetime of being a fugitive from justice, hunted by the law and always looking over his shoulder.

Fortunately, Bear is much more level-headed than the rest of his family, and he ended up leaving the Luverne police station without a drop of blood spilled. That may have seemed anticlimactic after the explosion of violence last week, but the war between the Gerhardts, the Kansas City mafia, the Blumquists, and the Minnesota state police is far from over. After Lou helped him escape, Ed ditched the trooper and took off into the night, presumably running home to make sure Peggy was alright. But who should emerge from the shadows and follow him up the dark and lonely road to Hanzee Dent, the Gerhardts' most remorseless killer.

The bloodshed is far from over, and with only four more episodes left in the season, things are probably going to get much worse very quickly. But for the meantime, Karl Weathers can rest easy, knowing that he saved some lives — or at least temporarily staved off death for a few more days.