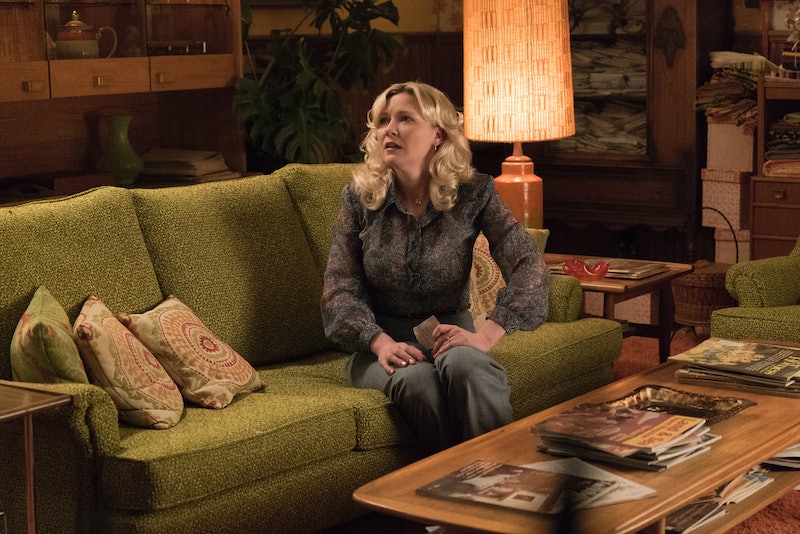 At this point in the season, it's clear that there's more to Kirsten Dunst's Peggy Blumquist than meets the eye. The small town beautician of Fargo Season 2 isn't just the bumbling, naïve young woman we may have originally assumed; between her bizarre choice to drive home with a body through her windshield, her ability to manipulate her husband into covering up for her, and her slowly revealed hoarder tendencies, it's clear that there's something seriously amiss inside pretty Peggy's mind. But this week, her unpredictable nature proved to be a huge asset, as Peggy squared off with Dodd Gerhardt in her cozy Minnesotan home.

Forget the Rumble in the Jungle or the Thrilla in Manila. This was a showdown for the ages; a clash of two egotistical, mentally-unbalanced titans. On the one hand you have Dodd Gerhardt, the psychotic eldest son of a tyrannical crime family, thirsty for vengeance after the death of his little brother. On the other hand you have Peggy Blumquist, a woman so desperate for her self-actualization that she's willing to do anything — including commit murder — to hold onto her dream of the future. So which won out? Dodd and his vengeance or Peggy and her dream?

Dodd had been dispatched by his mother to clean up the mess caused by Charlie's botched assassination of Ed. So he, Bear, Hanzee, and the rest of the Gerhardt henchmen traveled across the border from North Dakota to Minnesota to finish what the youngest Gerhardt started. Unfortunately, Ed was long gone by the time they arrived, hauled into the station for questioning after putting a cleaver through the head of a henchman. So while Bear and Hanzee headed for the police station, Dodd conducted a search of the house, in which Peggy was hiding.

After clearing the upper and ground floors, Dodd and his men headed into the basement, turned into a bizarro version of the hedge maze from The Shining by the teetering stacks of Peggy's magazines. When he heard one of his men get attacked, Dodd got skittish and he fired at a sudden sound — only to shoot one of his own henchmen in the head. Whoops. Even more pissed off now, Dodd continued weaving his way through the Blumquists' basement... until he was brought low by the business end of a cattle prod. Two long and painful-looking zaps later, and Dodd was out for the count. Peggy's face as she held the prod to her would-be killer's chest was as determined as it was when she was scrubbing the blood out of her shirt in the first episode.

But Dodd's not the only Gerhardt in trouble. When he and Bear ran out of the house in pursuit of the Blumquists, his daughter Simone didn't waste any time calling Mike Milligan to inform her lover of her dad's whereabouts. (The two had recently had yet another humiliating tiff.) Simone may have assumed that Milligan would take this opportunity to go after her dad — but she assumed wrong. Instead, Milligan, the remaining Kitchen brother, and the rest of the Kansas City mafia took advantage of the knowledge that the Gerhardt farm was undefended, and descended upon it with guns blazing. Mike grinned as he fired into the house, heedless of whether or not he killed the young woman he'd been sleeping with.

Is this the beginning of the end for the Gerhardts? With Rye dead, Otto comatose, Charlie incarcerated, Dodd incapacitated, and Floyd and Simone besieged, things sure don't look good for North Dakota's premiere crime family. But with four episodes left in the season, literally just about anything could still happen. But it's looking increasingly likely that resourceful Peggy might be one of the few characters that makes it out of Season 2 alive.