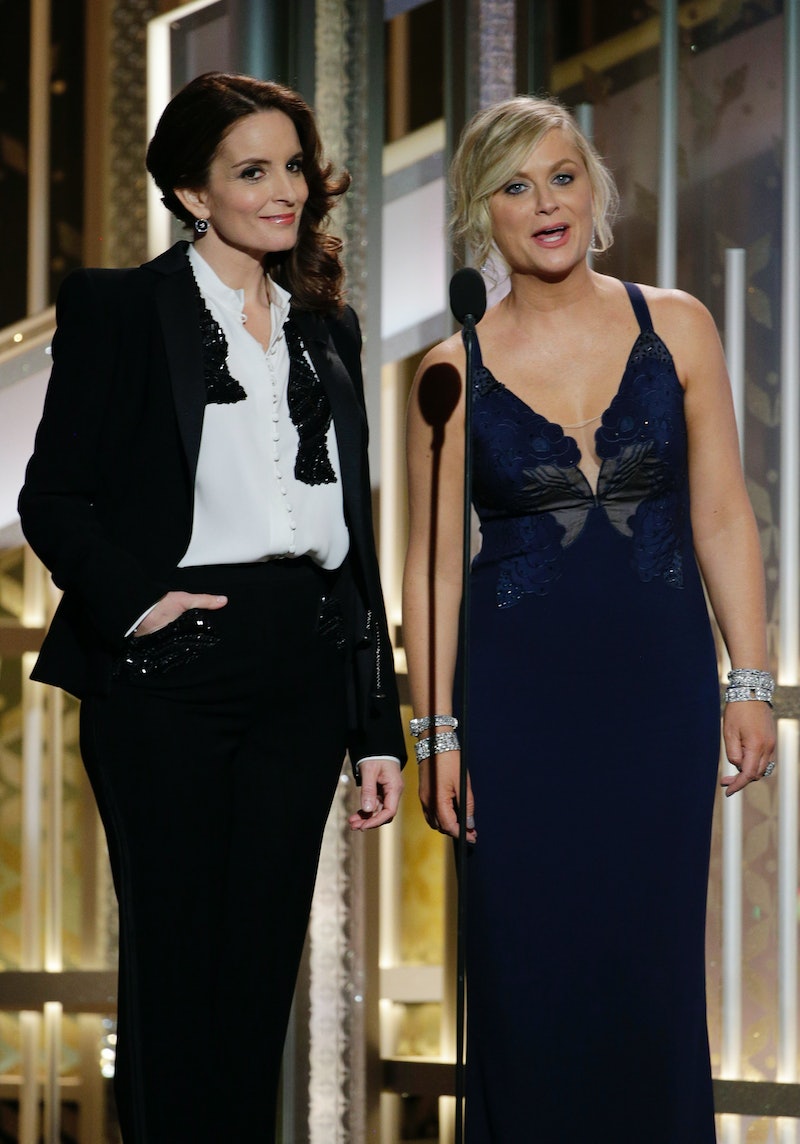 Thanks to their funny jokes and memorable quotes, 30 Rock's Liz Lemon and Parks and Recreation's Leslie Knope are two of the best female characters in recent TV history. Probably because the actresses who played them — Tina Fey and Amy Poehler — are downright hilarious. And when these two team up? It's even better. Just look at the times they hosted the Golden Globes together. Plus, their upcoming movie Sisters is bound to be amazing. In a recent interview with The Advocate, Tina Fey talked about her friendship with Amy Poehler and revealed the one reason you'll never see these two starring in the same sitcom. Fey said,

[Amy] and I haven't really talked about this, but I don't know if we could ever do a series together. We're both alphas who like to do our own thing and then meet up occasionally.

Hopefully this isn't too much of a shock to Poehler! Let's hope she wasn't in the middle of drafting some epic Liz Lemon and Leslie Knope crossover series. (Although let's be real, that'd be a brilliant idea!) In all seriousness, it totally makes sense that these two strong females can each carry a TV series on their own. Why should they have to share the spotlight? Plus, it's great they know their limits as far as friendship. Working with friends is always a tricky balance, but these two seem to have mastered it.

In her interview with The Advocate, Tina Fey talked about how ever since she and Amy Poehler met, they've had a mutual level of respect. She even made an awesome lion analogy, saying,

From the moment we met each other in Chicago in 1992, we've had tremendous respect for each other. We started on the same improv team, and we were put together like two beautiful baby lions in a cage who miraculously did not have the impulse to eat each other. What makes it great now is that the only time we see each other is when we work on things—hosting the Golden Globes, doing Sisters—so those experiences are exciting and fun. We're both thrilled to be there, and hopefully that's reflected in the work.

Their excitement is definitely reflected in their work. It's pretty much magical anytime these two join forces! Case-in-point: When Fey and Poehler tag-teamed the Weekend Update desk, they were arguably one of the greatest duos in Saturday Night Live history. It really is wonderful that they've been friends for more than two decades and continue to support one another in their careers. As usual, Tina Fey and Amy Poehler prove to be a prime example of BFF goals.

While Fey joked that their strong personalities may conflict in a TV series, I'm sure they could make it work if they really tried. So I won't give up hope on that just yet that. Maybe it'll happen in the distant future? Fingers crossed!