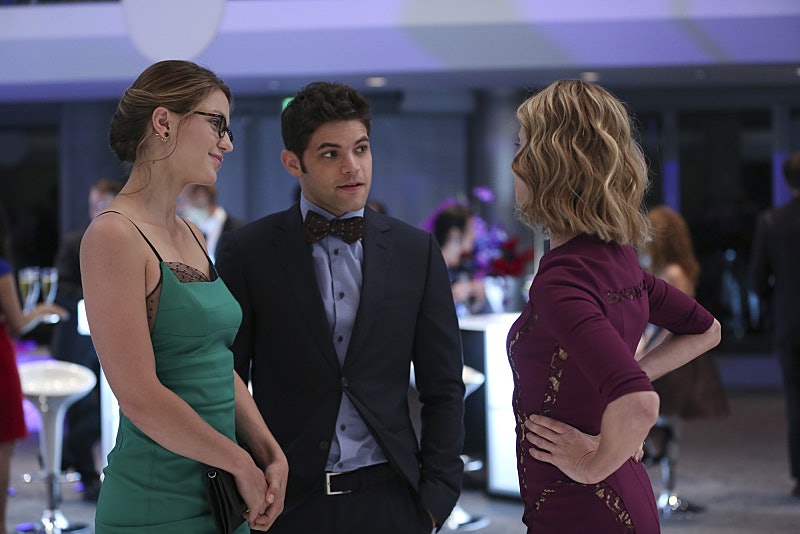 For the love of Orphan Black marathons and thai food, I might breath a tentative sigh of relief that Winn Schott isn't going to become a jealous supervillain after all. While the name Winslow Schott is an ominous one in DC Comics, Jeremy Jordan's character slipped a bit of info that could shed light on where this adaptation is going. Who is Winn's Dad on Supergirl ?

In October, Comicbook.com announced that Henry Czerny would play the villain Toyman on the CBS series as well as Schott senior, and Monday's episode marked the first time that his character has been mentioned on screen. According to the casting announcement, "Toyman weaponizes toys to wreak destruction and revenge but is ultimately driven by one thing – the obsessive desire to reunite with his beloved son." Yikes.

At the end of Monday night's episode, Schott told Kara that his father is in prison and "not a good guy." It's not Thanksgiving without a little family-related oversharing, am I right? The fact that he's in jail is the biggest connection to the character's origin . In the comics, Toyman was imprisoned multiple times. Every time he escaped jail, he got a little bit nuttier and his goals a little more sinister. He actually killed Cat Grant's son, who has been alluded to in the series. Kara Zor-El has to deal with a lot of alien prison escapees on Supergirl, but it could be her best friend's human father who turns out to be the most dangerous.

As long as we're not witnessing sweet, dorky "superfriend" Winn's descent into villainy, I'm OK with his father being Toyman. It has been worrying me that such a kind and funny character on the show was connected to a villain, because I don't want to see characters get hurt out of left field like that. Especially since Winn is getting the bottom corner of a love triangle and he might get bitter.

That isn't to say that Winn's jealousy won't be made an example of on the show. The CBS series seems to address a different problematic aspect of media (with regards to gender) each week. Leslie "Livewire" Willis, a radio DJ, brought us Monday night's feminist lesson of the week by degrading Supergirl's clothes, discussing her sexuality, and labeling her "adorkable" in a disparaging tone. I wouldn't be surprised if Winn Schott's crush became a discussion about feeling entitled to a romantic relationship just because someone is nice, and I'm honestly looking forward to how they handle it on Supergirl if that happens. As long as it doesn't turn him into a moustache-twisting Big Bad. We'll let Winn's dad take care o that part.