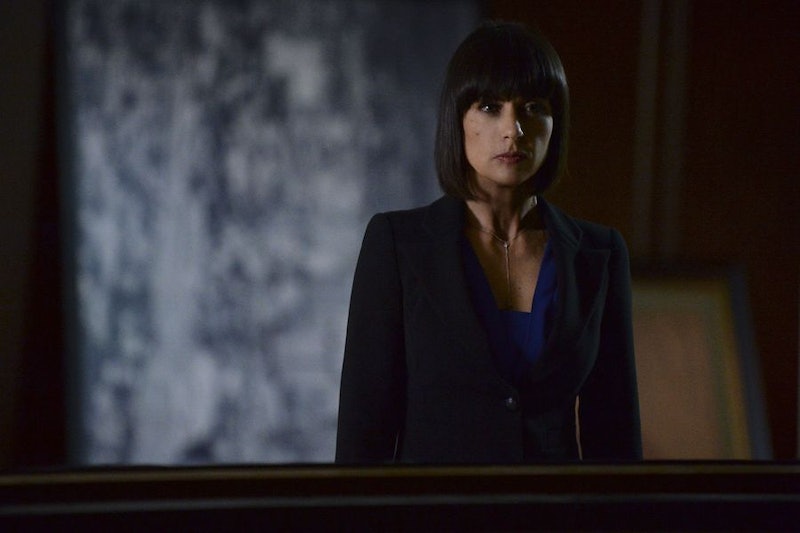 Rosalind Price has always been a shady figure on Agents of S.H.I.E.L.D. Season 3 and it looks like she just handily confirmed some fans' worst suspicions. Yep, in quite the one-two punch, she promptly hooked up with Coulson, only for Rosalind to meet with Hydra leader Gideon Malick literally the morning after. With tensions between S.H.I.E.L.D. and the ATCU running high, Coulson and Price's love story was always doomed to be of the star-crossed variety, but the big Hydra reveal means things are even more tangled and espionage-y than we thought.

That said, things never are quite what they seem on S.H.I.E.L.D. — and whether you're an ATCU apologist, a Ward redemptionist, or a staunch enemy of all of the above, we've got to explore all of our options. First off, does Price really have feelings for Coulson, or is it part of a trap? Does she even know she's dealing with one of Hydra's biggest bosses when she talks to Malick?

It's entirely possible that Price doesn't know the full magnitude of who Malick really is — wouldn't it be nice if she and Coulson were just in love, and the whole Hydra phone call turned out to be a big misunderstanding? That said, this is S.H.I.E.L.D and if all the Fitz/Simmons drama and May/Garner drama is any evidence, these characters don't get a happy ending very easily. Plus, in a postmortem interview with Entertainment Weekly, showrunners Maurissa Tancharoen and Jed Whedon made it pretty clear that Price knows what she's doing — they wouldn't say outright if she was betraying Coulson (when asked, both demurred from answering), but Whedon did say this:

Well, we know that Coulson is sleeping with the enemy — how much of an enemy she is and how far it’ll go before he starts to suspect something, those are still questions left to be answered. There’s no question that in the constant cat and mouse game they’ve been playing, right now he’s the one in the dark.

That doesn't exactly sound good. Tancharoen also admitted that Hydra and the ATCU would make for quite the deadly combination: "An institution possibly working under Hydra who’s amassing a group of Inhumans, it sounds like a formula for disaster" — and what better way to close out the winter finale then with an all-out war?

Tantalizing as MCU-level war sounds, it's also possible that Price could be working against Malick — she is a highly-trained super spy, after all. And even if she's not currently trying to pull something over on Hydra, it's definitely possible that she might someday change her tune. Call me a soft-hearted romantic, but I'm inclined to believe that the spark between her and Coulson could turn out to be something real — or maybe their Romeo & Juliet-style flirtation will cause her to shift her alliances. If Ward ends up joining forces with Malick, S.H.I.E.L.D. and the ATCU might have to actually band together to defeat them.