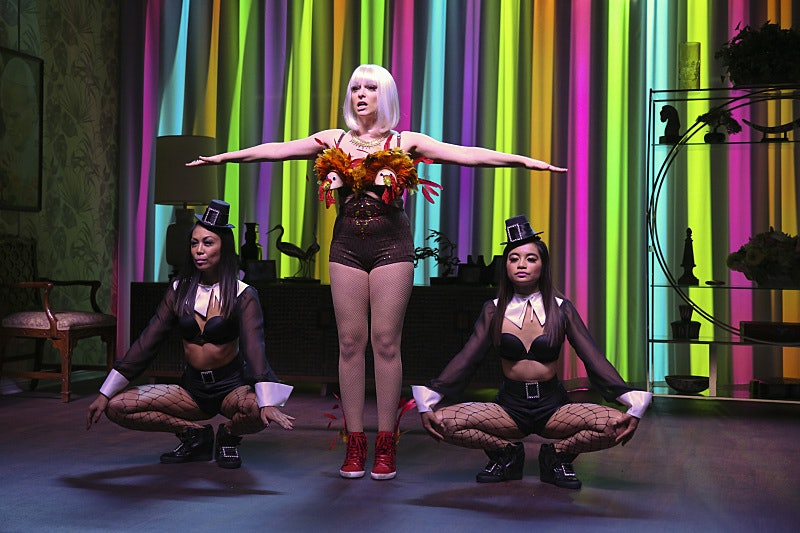 It seems almost impossible that the musical numbers on Crazy Ex Girlfriend can stay so strong week after week. The show packs 2 songs into the 1 hour episode and while some have been less than amazing (I'm looking at you, "I Love My Daughter") they are all largely hilarious and painfully honest. This week they turned out the best one yet with "I Give Good Parent", which managed to flip a common relationship trope on its head, and be hilarious and catchy all at the same time. When we last left Rebecca, she was spinning with the news that Josh was attracted to her and overcoming the stereotype of women needing approval. She's still stuck in Josh-land but this time it's Paula's idea to stage a run in with Mrs. Chan and snag herself an invite to their family Thanksgiving (ditching her mom in the process, that woman is an offstage time bomb).

Rebecca then launches into full manic-dream-girlfriend mode, perfecting a classic Filipino dish and heading to mass with his family. She manages to flip the trope of women sucking up to their partners parents by showing the insane lengths people go to in search of acceptance, and also by simply not being Josh's girlfriend. Valencia certainly doesn't have the same compulsion to make everyone like her — though maybe we should go easy on her, she has been starving since 1993 after all. Paula's plan works for a bit, everyone adores Rebecca, and Josh fights with Valencia but what she failed to factor in was the make up sex that inevitably follows a fight. After, Josh asks Valencia to move in with him — even though it's clear he hasn't thought that through.

Meanwhile, Greg continues his tour of wonderfulness: quitting his bar job and leaving his managers bad breath behind to go back to business school. That is until he spends his entire savings on medical procedures for his sick father. He ends up back at the bar, then bonding with Rebecca over tacos and tequila. In related news: I have officially joined Team Greg.