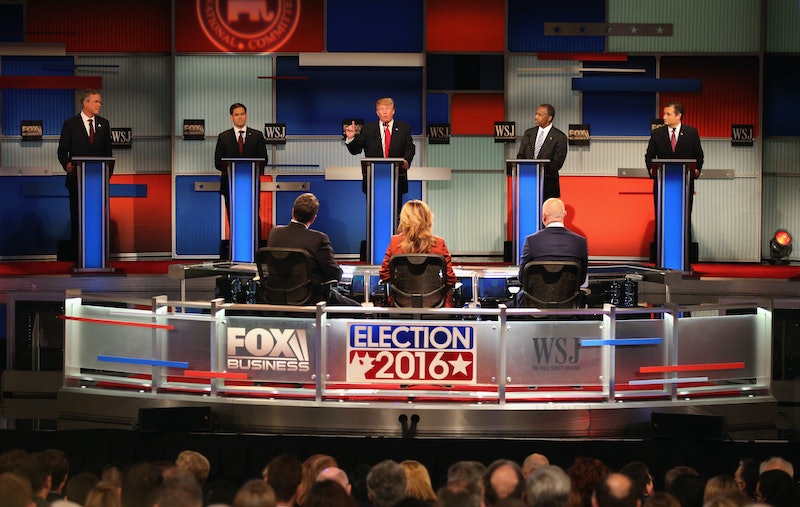 A few months ago, many Americans would say that the focus of the 2016 election would be social issues. Racial inequality would be the crux of the upcoming election, alongside student debt, raising the minimum wage, and ensuring jobs. But in the aftermath of the Paris attacks, this focus has shifted. Friday's attack made the looming threat of ISIS suddenly all too real, and as the election grows closer, the coming months will be a test for our presidential candidates — especially our Republican ones. But only time will tell how the Paris attacks will affect the GOP candidates.

Foreign policy is now center stage, and all eyes are on the Republican Party. Usually strong advocates of bolstering military and defense spending, Republicans are often considered to be the stronger party when it comes to national defense. Americans are already looking for answers from the candidates, and their responses to the attacks are providing a crucial and unparalleled insight into what their potential presidencies would look like. Unsurprisingly, this means that the Republican field might be due for a massive shakeup, since the two frontrunner candidates, Donald Trump and Ben Carson, have absolutely no foreign policy experience. And it's finally starting to show.

Trump chose not to immediately release a policy plan in the aftermath, instead preferring to tweet out his disagreement with President Obama's initial response. Trump was surprisingly silent until Monday, when he expressed his willingness to monitor and close mosques as a way of combating terrorism. But much of his bravado was gone. For a man who has previously delighted in promising to "bomb the shit" out of ISIS, it was a strangely soft response.

The good news for Trump, however, is that this is unlikely to shake his core supporters. He'll be able to rally in the coming weeks, reiterating his promise to be tough on ISIS. His call to bomb ISIS will reverberate among his supporters, who won't mind that he has little to no actual concrete ideas on tackling the terrorist organization. But his lack of policy points or proof of capability may halt his expansion. Americans seeking support and guidance may not turn to a man who doesn't seem to have a plan.

Unfortunately for Carson, that means they won't be turning to him either. Of all the candidates, Carson's initial reaction to the attacks might hurt him the most. Instead of a coherent, thought out response, Carson waffled, incapable of telling Fox News Sunday what he'd do other than give condolences to France and failing to demonstrate foreign policy knowledge. When pressed by reporters, Carson said, "boots on the ground would probably be important." Although Carson's soft spoken manner has been an asset to him in the past, there's something worrying about a candidate who doesn't know how to respond. There should be no "probably"s when combating terrorism.

Other candidates chosen to blame the Syrian refugee crisis, which has reached critical levels within the past few months. Carson, Ted Cruz, Marco Rubio, and Mike Huckabee all took the opportunity to assert their desire to not allow Syrian refugees into the United States. Cruz even went so far as to state that only Christian refugees should be allowed — a sentiment that may resonate among conservative bases, but may not appeal to moderate voters.

One candidate who may fare well in the aftermath is Rubio. Although young, the Florida senator has established a reputation for his foreign policy knowledge. In a country searching for a leader, someone as well versed and eloquent as Rubio could be a natural leader, youth and all. But Rubio joined the pack calling to bar refugees — flipping on his previous statement that he would support offering refuge to those who were screened. Following the Paris attack, however, Rubio claimed that background checks for refugees were impossible. Adopting this hard, conservative line may help elevate his already rising numbers — and place him at the front of the party.

Following him may be Jeb Bush and John Kasich, who proved themselves knowledgeable in foreign policy during interviews this past weekend. Kasich, who has a strangely large following despite being on the edge of the pack, was eager to showcase his knowledge and provide details on what his policies would be. But Bush — who similarly had a pre-established plan of an attack — may continue to suffer from the burden of his family legacy, which has plagued him throughout the campaign. His strong response against ISIS may remind voters of his brother's initial response to al Qaeda, as well as his call for a declaration of war against ISIS.

But things may look up for Lindsey Graham, who could experience a brief resurgence. Despite being dropped from the most recent GOP debate due to low poll numbers, Graham has posited himself from the beginning as a strong adversary against ISIS. His repeated references to ISIS have, at times, felt like a broken record. But voters may suddenly begin to appreciate it. "I have a plan. Please, for God's sake, wake up to the threats we face," Graham told CNN. "Hit them before they hit us. Fight them in their backyard, not our backyard."

Up until now, the anti-establishment candidates have fared well, and voters have flocked to those who have bucked the traditional politician image. But there's something to be said for experience and knowledge when it comes to waging war. Political experience doesn't count for everything in an election, but if an American president chooses to go back to war, voters might just want someone who knows how to play the game.