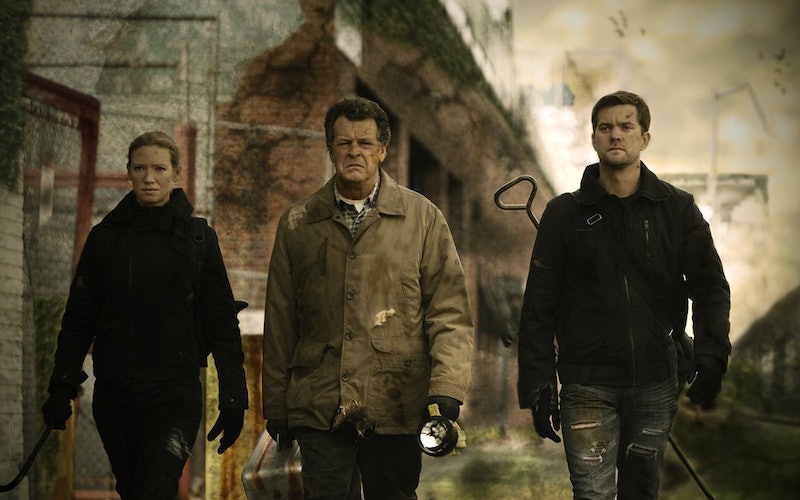 It's that time of year again: Holiday season. When Thanksgiving break is fast approaching, winter break is nigh, and the need to cuddle up in the corner of your room and sip tea instead of doing anything else is palpable. With all these breaks and changes of season, the last event of the fall has some serious perks. One of them, of course, being the aforementioned Thanksgiving break. It's possible (likely?) that you've already laid out the details of how you will spend the time off. It's also possible (likely?) that they include re-watching the best sci-fi police procedural that was ever on the air. (Fringe, of course.) Because there's nothing that sums up thanksgiving break quite like Fringe . Trust.

Fringe was one of those rare TV shows that stuck around for five seasons. The sci-fi drama was full of oddities, and basically screamed potential cult classic from the moment its pilot premiered on Fox. Plus, the characters on Fringe totally understand all the emotions that stem from Thanksgiving break, like running into old friends, socializing with family, getting the last slice of pie, etc. Fringe just gets it. Specifically, in all of the following ways.

1. When You'd Rather Stay At Home Than Brave the Crowded Airport

"I don't think I should travel. My feet are swollen from standing in front of the amber all day. I should stay here and regroup. What?" —Walter, Season 5, Episode 3: "The Recordist"

2. When You've Just Landed and Already Want to Go Back

"If you could get me out of here I could get myself home." —Olivia, Season 3, Episode 8: "Advance"

3. When You've Been Home for Two Days

"We've been back for two days and Walter is already driving you to drink.""Can you blame me?"—Olivia and Peter, Season 3, Episode 8: "The Box"

4. When Your Mom Does Your Laundry Without You Asking

5. When You See Old Friends

"You amaze me. After everything I put you through, I did the very thing I promised you I wouldn't do, I left you again. I'm more than a little embarrassed ya know." —Peter, Season 5, Episode 9: "Black Blotter"

6. When You Accidentally Run Into an Ex

7. When You Haven't Left the Couch in Three Days

"I feel like I'm losing my mind.""Oh, I don't think so. If you were actually going insane, you'd likely have no idea what's happening. Take it from me."—Olivia and Walter, Season 1, Episode 20: "The Road Not Taken"

8. When You Request Special Side Dishes to be Made in Your Honor

"How long is this going to take?""Miss Dunham, what we're doing, what you have asked me to do, is pushing the boundaries of all that is real and possible. We're not roasting a turkey."—Olivia and Walter, Season 1, Episode 9: "The Dreamscape"

9. When You Are Too Full To Handle Anything

"How badly does it hurt?""There is no pain."—Walter and Peter, Season 5, Episode 8: "The Human Kind"

10. When You're The Last Person to Receive Pie

"Whatever the closest thing is to fear that you can feel, I know that you're feeling it right now." —Peter, Season 5, Episode 5: "An Origin Story"

11. When You Are Trying to Socialize with Family

12. Finally, When You Leave Them to Go Back

"You're going to have a very difficult time without me, you know." —Newton, Season 3, Episode 4: "Do Shapeshifters Dream of Electric Sheep?"

A show complete with not only family dynamics, but also wormholes, time travel, and dimension jumping? Is there anything more appropriate to sum up your Thanksgiving break than that? I'd venture to say no.